You Want That Wedding Dress When? 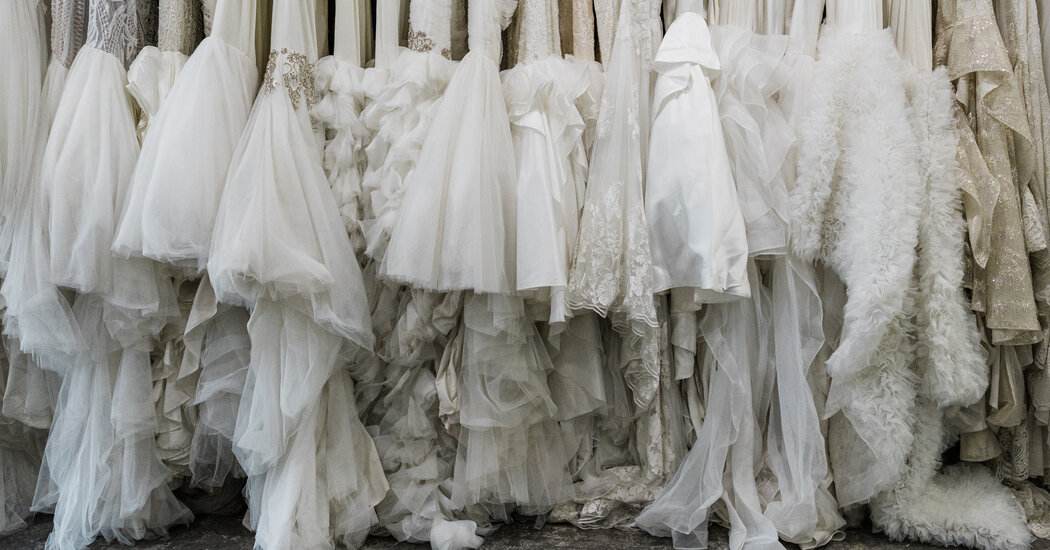 After postponing their weddings for months — and even having babies in between — brides are storming ateliers looking for gowns in a hurry. Designers can’t turn them away.

As a wedding photographer, Loreto Caceres was too focused on her clients’ postponements to worry about rescheduling her own nuptials, which were originally slated for January 2021 in Puerto Rico. “I was just over thinking about my own wedding, so we put it off and put it off,” she said. Finally, she and Paul Quinn Yetman, an electric engineer, married in June with just family at a museum in the Hamptons. She set off to find a dress just three weeks before the ceremony.

Ms. Caceres, who is based in New York, called the Sarah Seven bridal shop in SoHo. “I wanted them to know before I showed up that hey, I need it super fast,” she said. “They were like, ‘Don’t worry, we got you.’” She bought their Eloisa midi dress and had it tailored days before the wedding.

It has been a wedding season like no other, as couples rescheduled, postponed, shrunk and expanded their celebrations over the last year and a half. Some have hosted microweddings followed by bigger celebrations, while having babies in between. The frenzy has many bridal designers and tailors reeling but grateful — afraid to say no to any request, and often sewing seven days a week. Previously, brides had been encouraged by the industry to begin dress shopping six months to a year out from their wedding, a chronology that now seems like a prepandemic luxury.

“Right now, people come in and say, ‘Oh, I decided to get married two weeks from now. Can you help me?’” said Alzira Hermes, who owns an alterations studio in New York and is often recommended to brides at Carolina Herrera and Oscar de la Renta.

Andrea Pitter, the designer and founder of Pantora Bridal, noted that the majority of weddings were postponed last year. “It was the craziness of this year we really weren’t prepared for,” she said.

[Sign up for Love Letter and always get the latest in Modern Love, weddings, and relationships in the news by email.]

At Kleinfeld Bridal, which advertises itself as having the largest selections of wedding dresses in the world, consultants only prepare dresses that make sense for a bride’s time frame. “We ask a lot of questions of the bride when she first makes the appointment,” said Mara Urshel, Kleinfeld’s president. “We have to know exactly when the wedding is and what she’s looking for.”

To allay the panicked requests at Pantora Bridal, Ms. Pitter and her team set up a “samples boutique” on the lower level of her store in Bedford-Stuyvesant, Brooklyn. “The inventory got really, really low because brides had a wedding date a month later,” Ms. Pitter said. “We were getting crazy requests that we couldn’t help.”

After months without business, designers and boutique owners have had a hard time turning down work. Stephanie White, the designer and founder of the Los Angeles-based bridal line Odylyne the Ceremony, has made dresses in less than a month. “It’s a lot, but we’re dying for the business,” she said. “You want to help everyone but you can’t.”

For the designer Sareh Nouri, “If I have the fabric, if I have the lace, we don’t say no.” She described the recent situation as “madness,” adding, “We’re happy about that, right?” The deluge of business has allowed her to hire back every staffer laid off in 2020, and even open a flagship store in Short Hills, N.J., in June.

Many brides coming into stores and ateliers are so thrilled to finally celebrate — or so emotionally spent from multiple postponements — that they have been just grateful to find any white dress to wear. “I get the sense that brides are just way less particular overall,” said Marteal Mayer, the founder of Loulette Bride in Greenpoint, Brooklyn. “It’s a shift in priorities, completely.” Ms. White felt the same way: “As much as brides want to have that fairy tale, we’ve learned that the most important thing is to share that special day with the people you love, and look as beautiful as you can.”

Among the postponements are the brides who gave birth in the time between their two celebrations. “May 22, we had three brides who were pregnant and married on that date,” said Susan Ruddie Spring, the owner of the alteration service The Wedding Dresser, which operates in Brooklyn and Baltimore. Her team’s typical routine in such a situation is to open all the side seams. Then, she said, “We wait and do all of the work ten days before the wedding.”

Kayleigh Hyde, a speech language pathologist in West Belmar, N.J., postponed her big Catskills wedding by a year but still married David Hyde, who works for the Teamsters union, on her original date, in September 2020, in her mother-in-law’s backyard with just 15 guests. In July, the couple welcomed a baby girl. Ms. Hyde had bought a dress from Loulette Bride originally, rented another Loulette dress for the microwedding, and is now having her first dress entirely altered by Ms. Mayer to become A-line. “I emailed her when I found out I was pregnant like, ‘Can you resell the dress that I bought and I pick a different one?’” she said. Instead, the Loulette designer is just making it work. “I wasn’t going to purposely try to not have a baby just because of one day next year,” Ms. Hyde said.

The turmoil caused by pandemic rescheduling is upending bridal trends of recent years, like the popularity of Australian and Israeli brands (which often need more processing time) or bountiful beading (difficult to import from Indian vendors devastated by coronavirus). Given their time restraints and newly relaxed attitudes, many brides are opting for simpler gowns that are easy to tailor, or shorter dresses altogether.

Ms. White, of Odylyne the Ceremony, found viral success via Instagram with her Mini Caspian dress, which has sheer, puffy sleeves, a high collar, and a ruffled hemline that hits mid-thigh. The length makes it perfect for a dramatic City Hall moment or to pump up the style of a simple backyard fete.

After giving up her dream of a fall 2021 destination celebration in Italy, Ankita Dhawan of Brooklyn, a manager of strategy and analytics at Stadium Goods, wore the Mini Caspian dress to wed Manoj Vyas, a management consultant at Ernst & Young, in the backyard of a Brooklyn restaurant in June. Since the vibe “felt like a weekend lunch with our friends and family,” Ms. Dhawan said, “a long gown just wasn’t really going to do it for me.” Ms. White and her team made her the dress in about a month.

It’s hard to say how long these last-minute requests might continue, given the emergence of other virus variants. “There’s a fear in the back of people’s heads,” Ms. Nouri said. “What if this surges again, and then there’s more shutdowns? I’m going to miss another opportunity to get married.”

The anxiety, though, has made brides more decisive, she said. “If it works now, they’re making it work.”

Exhausted bridal designers still draw from wells of kindness when dealing with their customers. “Going into this, we understood that we need to be more gentle toward these brides, because they’ve all experienced things,” Ms. Pitter said. “Extend grace. Everybody is a little bit frantic right now.”