Home Business Plan Why Wait for a Sink When You Can Install an Entire Bathroom?
Business Plan

Why Wait for a Sink When You Can Install an Entire Bathroom? 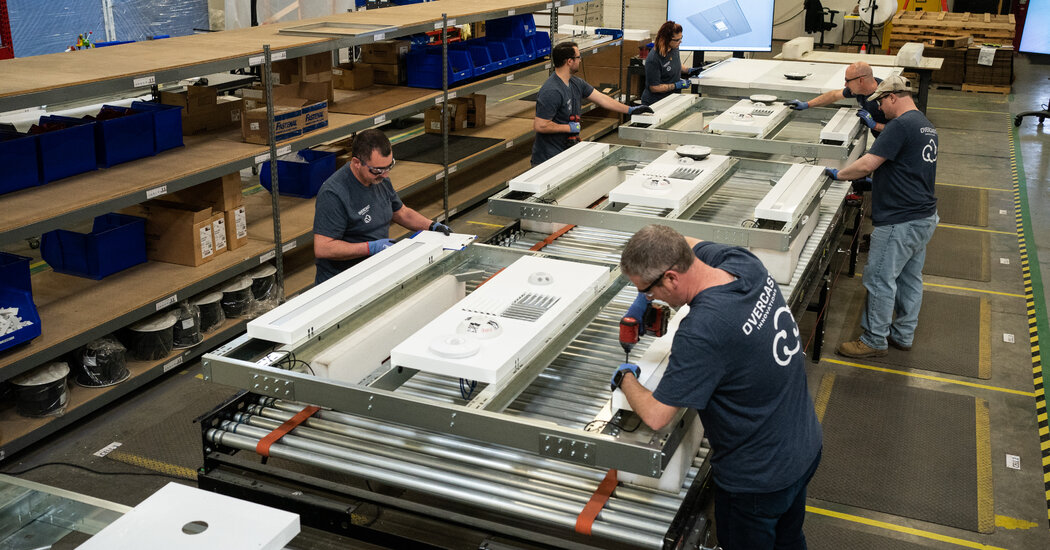 Amid growing shortages caused by global supply chain delays, developers are turning to prefabrication — the use of premade building parts like walls, staircases and even bathrooms.

When Deryl McKissack, the chief executive of the design and construction firm McKissack & McKissack in Washington, heard that electrical switch gear needed for the new Dallas-Fort Worth International Airport terminal was delayed because of supply chain issues, she knew the project would not come to a halt.

Thanks to a plan to build components requiring the gear off site for installation at the terminal later, a concept known as prefabrication, construction would proceed on schedule.

Working in parallel rather than sequentially “saved the project about six months’ time,” Ms. McKissack said.

Under conventional methods, basic materials are transported to a construction site, where they are assembled in a specific order. The prefabrication of parts like walls and staircases had been gaining momentum before the pandemic as a way to save money and time.

Now, shortages caused by global supply chain delays are accelerating the trend because building off site can prevent problems in one area from cascading through the whole project.

Factory prefabrication offers a more controlled environment, the opportunity to order parts more cheaply in bulk and the ability to gather workers with specific skills in one place with a consistent schedule. The specialist-made approach makes production faster and more precise, and technological advances have made it possible to create a variety of building elements like entire bathrooms with toilets and sinks and million-dollar HVAC and plumbing modules.

Prefabrication methods have long been used in the construction industry, but there are drawbacks, including high transportation costs and the public perception that the result can look homogenized. And there are other challenges, Ms. McKissack said. Planning and organization have to be done further in advance and must be more precise. It can be hard to finish the process on a construction site if adjustments have to be made.

But the benefits of prefabrication have become more apparent when the coronavirus pandemic and soaring inflation have snarled supply chains around the world, and a shortage of skilled workers has left manufacturers struggling to keep up with growing demand, said Alfonso Medina, chief executive of the Madelon Group, a developer in Brooklyn.

Standardization makes construction less expensive and more predictable, he said, adding that without it, “every time you build a building you are reinventing the wheel.”

Components built off site are typically complicated to make but straightforward to transport. For example, Overcast Innovations, a Seattle start-up, manufactures ceiling appliances in a factory, then ships them to construction sites for installation. Making the rectangular panels can require expertise in up to 15 specialties, including electrical, plumbing, HVAC, lighting, internet and sensor devices, said Matt Wegworth, the company’s managing director.

“Buildings are getting more complicated all the time, and we want to see which parts we can deliver more efficiently,” he said.

Companies like Overcast Innovations can buy in bulk, which reduces costs and, more important, safeguards against shortages. That’s important to construction managers because supply chain issues are “the worst we’ve seen in 10 years,” Mr. Wegworth said. His company can shift materials within a portfolio of projects based on customers’ needs, and he estimates that the ceiling units made by Overcast deliver cost savings of 15 to 20 percent over those assembled at a construction site.

On a traditional construction project, something as small as the delayed delivery of temperature sensors can throw a whole building schedule into question, Mr. Wegworth said.

Prefabrication also reduces the waste created at a construction site because extra materials such as copper piping, electric wires or steel framing components can be used for other clients. At a building site, it may not be cost effective to return extra materials.

An example of a building element that can be made off site more efficiently is the “headwall,” an architectural feature in hospitals that sits behind a patient’s bed and houses equipment to deliver oxygen, run fluid-collection systems, provide lighting and connect to the nurse call system. Building headwalls in a factory is quicker than having an electrician go room by room at a hospital construction site, followed by a medical gas plumber and other specialists, said Scott Flynn, vice president of sales at Amico, which makes headwalls and other products for health care facilities.

By incorporating completed pieces like headwalls, construction managers don’t need to source, order and manage each subcomponent, which means they can hire fewer workers with specialized skills, Mr. Flynn said. During the first wave of Covid-19 illnesses, Amico headwalls were used in field hospital sites to speed their construction.

Then, a shipping container shortage. Shipping containers piled up in many parts of the world after they were emptied. The result was a shortage of containers in the one country that needed them the most: China, where factories would begin pumping out goods in record volumes.

Fabricating components off site can also increase their quality, Ms. McKissack said, because a factory offers a more controlled environment without the dust, debris, wind and rain of a construction site. Precision manufacturing technology is also improving. All this makes the process “faster, safer and more accurate,” she said, and it can reduce theft and spoilage.

Labor shortages are another reason prefabricated components are gaining momentum, said Raghi Iyengar, chief executive of ViZZ Technologies in Peachtree Corners, Ga., a suburb of Atlanta. The company makes software that helps manage off-site construction, and it has been used in about 2,000 commercial buildings.

During the pandemic, many older, skilled construction laborers left the work force, exacerbating an existing shortage, he said. Some construction managers were left scrambling to find specialists for job sites.

Prefabrication can help alleviate the worker shortage because building elements can be ordered from anywhere rather than requiring local expertise. A small factory could be created in a strategic area; for example, “a facility in Pueblo, Colo., could easily supply Denver and other nearby cities,” Mr. Iyengar said.

He added that the prefabrication method offered safety benefits as well: If you can “thin out the quantity of activities on site, people aren’t tripping over each other, and fewer bodies improves safety.”

Some skilled laborers prefer the factory setting, where they can work indoors with a predictable commute, Mr. Iyengar said, versus site work, where they might experience harsh weather, early hours and inconvenient locations.

Mr. Iyengar predicts that the prefabrication trend will be adopted more widely after the pandemic, regardless of supply chain and labor conditions. “It’s becoming more of an expectation now, rather than aspirational,” he said.