What Jerome Powell Didn’t Do: Lay the Groundwork for Higher Rates 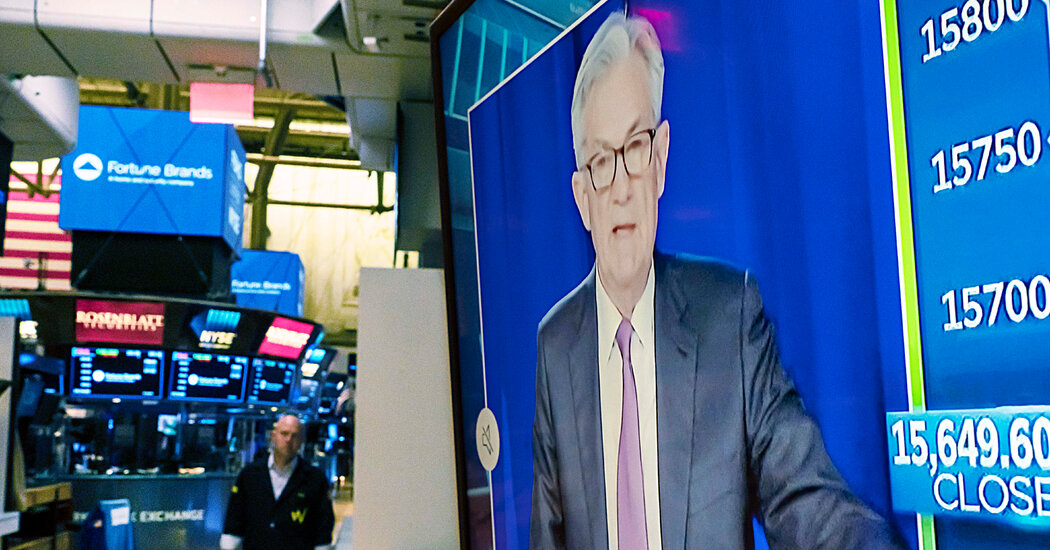 He said high inflation was mostly a result of pandemic effects like supply network disruptions, a problem he thinks the Fed can’t fix.

The real news out of the Federal Reserve on Wednesday was not in what it did, but in what Chair Jerome Powell didn’t do.

The thing that the Fed’s policy committee did — announce that the central bank would gradually wind down its economy-stimulating program of buying bonds — was highly telegraphed and comfortably in line with investors’ expectations.

The thing that Mr. Powell didn’t do was give any hint that persistently high inflation in recent months was leading him to rethink his patient approach to raising the Fed’s interest rate target. Rather, he repeated his longstanding belief that high inflation was mostly caused by disruptions in global supply networks and other ripple effects of the pandemic — problems that the Fed can’t do much about.

It is a delicate moment. President Biden must decide whether to reappoint Mr. Powell to a second term leading the Fed. High inflation is causing economic discontent for Americans, according to surveys, and helping to drag down the president’s approval ratings. Global bond markets have been gyrating amid uncertainty about whether the era of ultralow interest rates may be coming to an end.

On interest rates, Mr. Powell rejected the thinking of leaders at several other leading central banks and of a handful of his own colleagues. They think that excess demand in the economy is a big part of the inflation problem and that rate increases would help address it — and that current high inflation could become ingrained in economic decision-making, with long-lasting consequences.

If he had expressed more alarm about those inflationary pressures, it would have been a signal that the Fed might act to raise rates more abruptly than it once planned. The Bank of Canada, the Reserve Bank of Australia and the Bank of England have recently done just that. Several Eastern European central banks are going a step further, aggressively raising rates to try to combat inflation (including a 0.75-percentage-point rate increase by the Polish central bank on Wednesday).

Mr. Powell himself has essentially conceded in recent appearances that surging prices due to supply disruptions are on track to last longer than he expected. He said in late September that it was frustrating that supply chain bottlenecks weren’t improving and might be getting worse, and said this would hold inflation higher for longer than the Fed had thought.

But he was steadfast on Wednesday in not suggesting that those developments were a reason to accelerate the Fed’s interest rate hike plans. He suggested those would need to wait until the tapering of bond purchases was complete and until Fed officials concluded the economy had achieved maximum employment.

“We understand the difficulties that high inflation poses for individuals and families,” Mr. Powell said Wednesday. But he continued: “Our tools cannot ease supply constraints. Like most forecasters, we continue to believe that our dynamic economy will adjust to the supply and demand imbalances, and that, as it does, inflation will decline to levels much closer to our 2 percent longer-run goal.”

With language like that, he was declining to embrace the use of “open-mouth policy,” or of essentially trying to assuage inflation fears by using more specific language to suggest the Fed had a hair-trigger readiness to take immediate action to head off higher prices.

He appeared to be applying the lessons of the 2010s labor market in setting the central bank’s course. Over that decade, unemployment kept falling lower, with participation in the work force rising higher than many analysts had thought plausible. With hindsight, the Fed may have erred by raising interest rates prematurely, slowing that process of labor market improvement.

In a 2021 context, that means allowing more post-pandemic healing of the labor market before assuming, for example, that many of the Americans who currently say they are not in the labor force will return as public health conditions improve.

“There’s room for a whole lot of humility here as we try to think about what maximum employment would be,” Mr. Powell said. The last economic cycle, he said, showed that “over time you can get to places that didn’t look possible.”

Covid’s impact on the supply chain continues. The pandemic has disrupted nearly every aspect of the global supply chain and made all kinds of products harder to find. In turn, scarcity has caused the prices of many things to go higher as inflation remains stubbornly high.

Almost anything manufactured is in short supply. That includes everything from toilet paper to new cars. The disruptions go back to the beginning of the pandemic, when factories in Asia and Europe were forced to shut down and shipping companies cut their schedules.

First, demand for home goods spiked. Money that Americans once spent on experiences were redirected to things for their homes. The surge clogged the system for transporting goods to the factories that needed them — like computer chips — and finished products piled up because of a shortage of shipping containers.

Now, ports are struggling to keep up. In North America and Europe, where containers are arriving, the heavy influx of ships is overwhelming ports. With warehouses full, containers are piling up at ports. The chaos in global shipping is likely to persist as a result of the massive traffic jam.

No one really knows when the crisis will end. Shortages and delays are likely to affect this year’s Christmas and holiday shopping season, but what happens after that is unclear. Jerome Powell, the Federal Reserve chair, said he expects supply chain problems to persist “likely well into next year.”

He also appeared to be deploying another lesson from the 2010s — namely those learned in the 2013 “taper tantrum” when global markets went haywire as Chair Ben S. Bernanke moved to taper the Fed’s bond purchases.

A key lesson of that era is that tapering needs to be telegraphed far in advance, and separated as much as possible from the decision to raise interest rates. In that episode, markets experienced a double-whammy as they envisioned both a winding down of the Fed’s bond buying and rapidly raising rates.

With his assurances Wednesday that the Fed wasn’t in a hurry to raise rates, Mr. Powell was essentially trying to avoid that problem.

None of this means that the era of near-zero rates will last anything close to as long as it did after the global financial crisis. Mr. Powell said as much by stating the United States could achieve “maximum employment,” a legally mandated goal of the Fed, by the second half of 2022, which would clear the way for rate increases.

But if the inflation surge of 2021 proves something other than temporary, Mr. Powell’s decision to stick to his guns at this meeting will loom as a missed moment to join other English-speaking countries in using monetary policy to try to stamp it out.

Home-based businesses are becoming increasingly popular. There are a wide array of business types that can be run mostly, if not entirely, from home...
Read more

Ballet Kelowna pushes dancers to the limits in new performance

Prepare to see the dancers of Ballet Kelowna like you never have before. They have been pushing the limits of ballet in their upcoming...
Read more

Whether you’re an aspiring entrepreneur or you’ve recently opened a business, you’re likely thinking about all the skills you’ll need to make your business...
Read more