Want a Covid Test With Your Viagra? 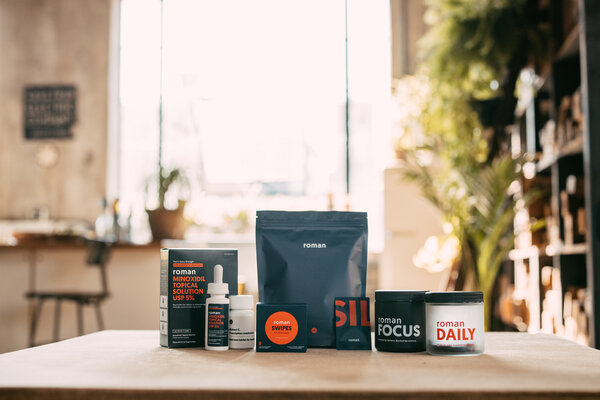 Like many New Yorkers the week before Christmas, Dinah Chamberlain, 39, was on the hunt for at-home Covid-19 tests. She was going to visit her parents in Wisconsin, and she wanted to test regularly while with them.

“I heard that one pharmacy near me in Williamsburg had them. I called them, and they said they only had five left,” she said. “I ran over there to watch the person in front of me buy the last one.”

Soon after, she saw a post on Instagram from a local news site in her Brooklyn neighborhood saying that Roman, a health care provider known for catering to men, had tests in stock and could get them to customers within two days.

The New York City-based start-up was founded in October 2017 as a digital men’s health clinic. It is a place men — especially those who make up the target audience of cheeky subway ad campaigns — can get treatment for conditions including hair loss, erectile dysfunction and premature ejaculation. And no in-person doctor’s visit is needed; everything can be done virtually.

Ms. Chamberlain, who works as a men’s wear designer, had vaguely heard about the company through subway and television ads, but she certainly never expected to become a customer.

Until now that is. She had tests shipped to Wisconsin immediately.

“It’s funny that in an emergency situation I am turning to an erectile dysfunction company,” she said. “I mean, good for them for having them when no one else did.”

Since its inception Roman, now called Ro, the umbrella company name, has grown beyond serving men who have problems they want to take care of quietly.

A year after the company launched, it created Zero, a virtual, medical program to help people stop smoking. Within three years it had Rory, the women’s version of Roman with services including skin care and sexual health treatments, and Ro Pharmacy, an online pharmacy that distributes over 1,000 generic prescriptions across the United States.

It now owns Modern Fertility, a reproductive health clinic; Kit, a company that does at-home diagnostic testing; and Ro Mind, a mental health clinic geared toward treating anxiety and depression.

According to Ro, clients span all ages and have a wide variety of medical needs. “People might be more familiar with us because of where we started, but when we look at our data, the majority of our patients are signing up for something other than E.D.,” said Zachariah Reitano, one of the co-founders. But it wasn’t until the company started selling at-home Covid tests in November that many customers started to get the message that the company was more than a way to get generic Viagra “from the comfort of home.”

People who never would have thought of even going to the company’s website are becoming enthusiastic customers. They are posting about Roman and Ro on social media, giving the company free, organic advertising.

It’s a gift health care companies don’t always get, said Mr. Reitano. As he put it, “It’s rare that people have had such a great health care experience that they want to post about it on social media.”

When Evan Hoffman, 42, a software engineer who lives in Bellmore, Long Island, found rapid Covid tests on Ro’s website, he tweeted about it. “I saw multiple people on Twitter, blue check mark people, complaining that they couldn’t find a test, so I sent an ad to them and said, ‘Go get this thing. They have it in stock,’” he said.

He was aware of the company’s reputation. “In my head Roman is the Viagra company,” he said. His thoughts were confirmed when after he bought the Covid tests he got ads for all sorts of erectile dysfunction products. “I’m like, ‘no, please God no,’” he said. “I need to click on some other stuff to train Instagram to stop sending these.”

But he posted about the company anyway. He thought it was too important to spread the message about where to find Covid tests than to worry about the potential for embarrassment. “It was like I had found a diamond in the rough that nobody had discovered yet,” he said.

Mr. Hoffman hasn’t bought anything else from the site, but he is open to it for the first time. “If I needed a refill on a medicine, and they had a very good price, I guess I can see using their pharmacy,” he said. “I would also be open to other kinds of tests, like if they sold strep tests or anything like that.”

The global surge. As the Omicron variant sweeps across the planet, the global tally of new coronavirus cases has for the first time passed one million per day on average. The previous daily average global case record set last April has already been broken three times this week.

Canceled flights. With Covid surge, has come thousands of flight cancellations, as airlines are unable to adequately staff their flights. Looking for relief, the airline industry pushed the CDC to shorten its recommended isolation period for Americans infected with Covid-19. On Monday, it reduced the recommended quarantine period to five days for those without symptoms.

Around the world. South Africa announced that its Omicron wave had passed without a large spike in deaths. Case counts in the country are down 30 percent in the last week. The announcement offered cautious hope to other countries grappling with the fast-spreading variant.

Staying safe. Worried about spreading Covid? Keep yourself and others safe by following some basic guidance on when to test and how to use at-home virus tests (if you can find them). Here is what to do if you test positive for the coronavirus.

He added that this experience made him respect the company. “It gave them legitimacy that they were selling real Covid-19 products at a decent price and could deliver them on time,” he said.

About the actual tests: Ro sells the On/Go brand of Covid-19 tests and charges $30 for a pack of two. That is more expensive than other products elsewhere tend to be. The BinaxNOW Covid-19 Antigen Self Test, for example, sells for $24 for two at most pharmacies. The company insists it has to charge that much. “We don’t make a profit when someone buys a single test because of the cost of the test as well as the free two-day shipping,” said Mr. Reitano.

Ms. Chamberlain said buying Covid-19 tests didn’t completely change her image of the company. “In my head Roman is still more for men,” she said. But she looks favorably upon the company because they could get her tests when CVS and Walgreens couldn’t. “I feel like they were definitely smart to have them because there is a huge demand,” she said.

Ro said it’s been working since January 2021 to make sure it has Covid tests in stock, because that’s when customers started asking for them. It hasn’t been a seamless process. (One of its early partners, for example, hasn’t yet gotten approval from the Food and Drug Administration for its tests.) “We’ve continued to invest even as cases have risen and fallen,” said Mr. Reitano. “We continued our investment knowing if there is a rise in cases, if there are additional variants, we are prepared, we have enough in stock.”

For example, at the beginning of the year, Ro had three pharmacy distribution centers across the country. Now it has 10, so it can deliver products quickly. Only time will tell if the company will be able to keep up with demand for its Covid-19 tests as other companies struggle.

But for now it’s clear that it has a trendy product that people are happy to talk about. Eric Goldie, 31, who works in New York City real estate full time but is also a social media influencer, has been hired by Roman for digital campaigns. He said when he first heard that Roman was selling at-home Covid tests, he called the social media agency that Roman works with and asked to be part of selling the product.

He expects he’ll get a different reaction from his audience when he’s posting about at-home tests than medicine for premature ejaculation.

“What is someone going to troll you about with a Covid-19 test?” he said.