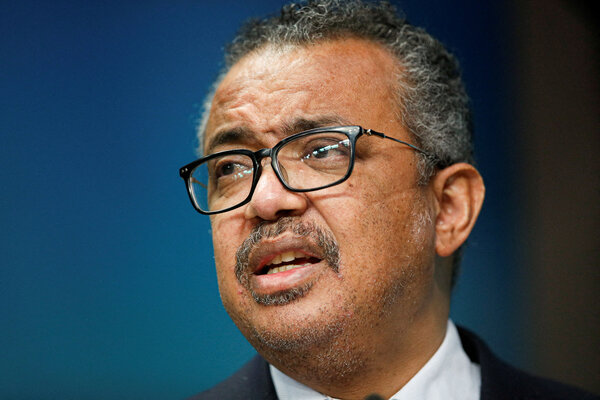 There have been more than 16,000 cases in 75 countries, overwhelmingly among men who have sex with men.

For the second time in two years, the World Health Organization has taken the extraordinary step of declaring a global emergency. This time the cause is monkeypox, which has spread in just a few weeks to dozens of countries and infected tens of thousands of people.

Dr. Tedros Adhanom Ghebreyesus, the W.H.O.’s director general, on Saturday overruled a panel of advisers, who could not come to a consensus, and declared a “public health emergency of international concern,” a designation the W.H.O. currently uses to describe only two other diseases, Covid-19 and polio.

“We have an outbreak that has spread around the world rapidly through new modes of transmission, about which we understand too little, and which meets the criteria” for a public health emergency, Dr. Tedros told reporters. It was apparently the first time that the director general had sidestepped his advisers to declare an emergency.

The W.H.O.’s declaration signals a public health risk requiring a coordinated international response. The designation can lead member countries to invest significant resources in controlling an outbreak, draw more funding to the response, and encourage nations to share vaccines, treatments and other key resources for containing the outbreak.

It is the seventh public health emergency since 2007; the Covid pandemic, of course, was the most recent. Some global health experts have criticized the W.H.O.’s criteria for declaring such emergencies as opaque and inconsistent.

At a meeting in June, the W.H.O.’s advisers concluded that while monkeypox was a growing threat, it was not yet an international emergency. The panel could not reach a decision on Thursday, Dr. Tedros said.

“This process demonstrates once again that this vital tool needs to be sharpened to make it more effective,” he added, referring to the W.H.O.’s deliberations.

Monkeypox has been a concern for years in some African countries, but in recent weeks the virus has spread worldwide. Some 75 countries have reported at least 16,000 cases so far, roughly five times the number when the W.H.O.’s advisers met in June.

Nearly all the infections outside Africa have occurred among men who have sex with men. The outbreak has galvanized many in the L.G.B.T. community, who have charged that monkeypox has not received the attention it deserves, as happened in the early days of the H.I.V. epidemic.

But with the delay, “one can argue that the response globally has continued to suffer from a lack of coordination with individual countries working at very different paces to address the problem.”

“There is almost capitulation that we cannot stop the monkeypox virus from establishing itself in a more permanent way,” she added.

Dr. James Lawler, co-director of the University of Nebraska’s Global Center for Health Security, estimated that it might take a year or more to control the outbreak. By then, the virus is likely to have infected hundreds of thousands of people and may have permanently entrenched itself in some countries.

“We’ve now unfortunately really missed the boat on being able to put a lid on the outbreak earlier,” Dr. Lawler said. “Now it’s going to be a real struggle to be able to contain and control spread.”

The longer the outbreak goes on, the greater the chances are of the virus moving from infected people to animal populations, where it could persist and sporadically trigger new infections in people. This is one way that a disease can become endemic in a region.

As of Saturday, the United States had recorded nearly 3,000 cases, including two children, but the real toll is thought to be much higher, as testing is only now being scaled up. Britain and Spain each have about as many cases, and the rest are distributed through about 70 countries.

Many of the infected in these countries report no known source of infection, indicating undetected community spread.

The W.H.O. advisers said at the end of June that they did not recommend an emergency declaration in part because the disease had not moved out of the primary risk group, men who have sex with men, to affect pregnant women, children or older adults, who are at greater risk of severe illness if they are infected.

Though the virus is spreading primarily through close contact, researchers are still assessing the routes of transmission in the current outbreak. And in interviews, some experts said they did not agree with the rationale.

“Do you want to declare the emergency the moment it’s really bad, or do you want to do it in advance?” said Dr. Isabella Eckerle, a clinical virologist at the University of Geneva.

“We don’t have this problem now. We don’t see the virus in children, we don’t see it in pregnant women,” she added. “But we know if we let this go, and we don’t do enough, then it will happen at some point.”

A similar W.H.O. committee that convened in early 2020 to evaluate the coronavirus outbreak also met twice, deciding only at its second meeting, on Jan. 30, that the spread of the virus constituted a public health emergency.

Committee members suggested at the time that the W.H.O. consider creating “an intermediate level of alert” for outbreaks of moderate concern. The organization may need such a system as outbreaks become more frequent.

Deforestation, globalization and climate change are creating more opportunities for pathogens to jump from animals to people. Now, an emerging virus can quickly transcend national boundaries to become a global threat.

But most public health authorities remain equipped only to handle chronic diseases or small outbreaks.

The devastation of the Covid pandemic and the surge in monkeypox should serve as a warning to governments to prepare for new epidemics without notice, said Tom Inglesby, director of the Johns Hopkins Center for Health Security at the Bloomberg School of Public Health.

“As much as the world is tired of infectious disease crises, they are part of a new normal that is going to demand a lot of ongoing attention and resources,” he said. “We need global vaccine and therapeutics production and stockpiling approaches that don’t yet exist.”

Monkeypox has periodically flared in some African countries for decades. Experts have sounded the alarm about its potential as a global threat for years now, but their warnings went mostly unheeded.

Vaccines and drugs are available in large part because of fears of a bioterrorism attack with smallpox, a close relative of the monkeypox virus.

But access to a drug called tecovirimat has been snarled by time-consuming bureaucracy and government control of the supply, delaying treatment by days or even weeks for some patients.

Doses of Jynneos, the newer and safer of two available vaccines, have been severely constrained — even in the United States, which helped develop the vaccine.

As of Friday, New York City had logged 839 monkeypox cases, nearly all of them in men who have sex with men, according to the city’s Department of Health. In late June, the city began offering the monkeypox vaccine, but ran out with just about 1,000 doses available.

The supply has grown slowly since then to about 20,000 doses. The city offered another 17,000 first-dose appointments on Friday evening, but those, too, were filled quickly.

A failure to coordinate the response has also squandered opportunities to collect data in large multinational studies, particularly where disease surveillance tends to be spotty.

“This inability to characterize the epidemiological situation in that region represents a substantial challenge to designing interventions for controlling this historically neglected disease,” Dr. Tedros said about West and Central African countries in a statement on Thursday.

For example, monkeypox cases in Nigeria and the Democratic Republic of the Congo, where the virus has been endemic, suggested that a painful body-wide rash can develop in one to two weeks after exposure.

But many patients in the current outbreak have developed lesions only in the genital area. Some — especially those who develop sores in the throat, urethra or rectum — have suffered excruciating pain.

“I was scared to use the bathroom actually,” said one recent patient, Gabriel Morales, 27, a part-time model based in New York City. “I can’t even describe it. It feels like broken glass.”

Many other patients have experienced only mild symptoms, and some have not had the fever, body aches or respiratory symptoms typically associated with the disease.

It’s possible that only severe cases were detected in the endemic regions of Africa, and the current outbreak offers a more accurate picture of the disease, Dr. Eckerle said. Or it could be that the virus itself has changed significantly, as has the profile of symptoms it causes.

According to preliminary genetic analyses of samples from infected patients, the monkeypox genome seems to have collected nearly 50 mutations since 2018, more than the six or seven it would have been expected to amass in that period.

It’s unclear whether the mutations have changed the mode of transmission, severity or other qualities of the virus. But early analysis hints that monkeypox may have adapted to spreading more easily between people than it did before 2018.

Coordinating the response among nations would help address many of the uncertainties around outbreak, Dr. Eckerle said: “There are so many open questions.”

Niagara Police are seeking a Buffalo, N.Y., man in connection with a weekend stabbing in Welland, Ont. that sent a man to hospital with...
Read more