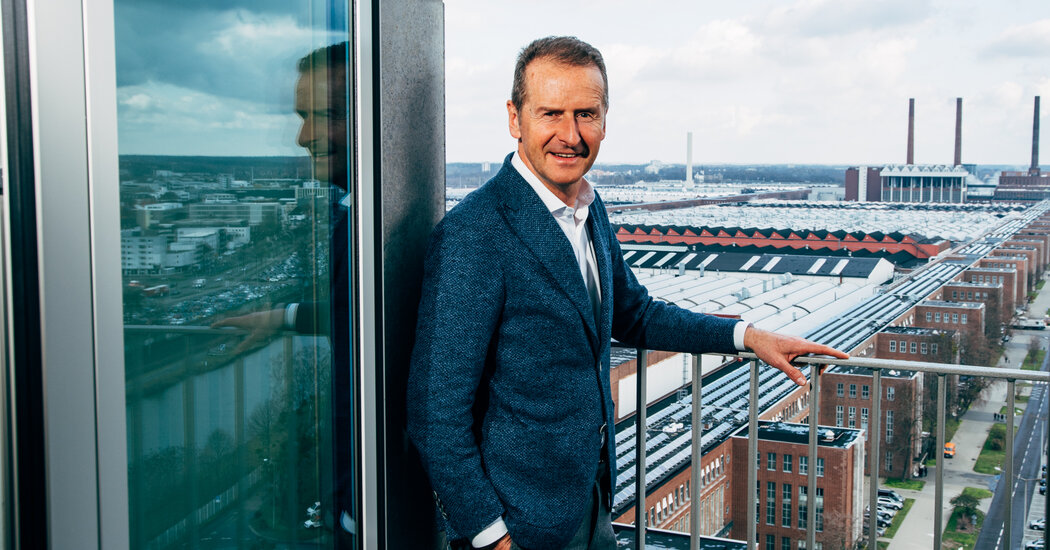 Herbert Diess, the chief executive, seeks to cast VW as a dynamic, modern company, but his style risks the ire of its powerful works council.

WOLFSBURG, Germany — In July, when Herbert Diess, Volkswagen’s chief executive, wanted to congratulate the company for a strong first half of the year, he posted a video of himself zipping across a waterway at the company’s headquarters in Wolfsburg on an electric hydrofoil, delivering a message of thanks to VW’s roughly 200,000 workers.

“I look forward to seeing you again after the vacation,” he said, cutting lazy doughnuts in the water, “and continue working together on the success of VW.”

At a time when Volkswagen is still trying to regain trust lost in the emissions scandal of 2015 and fend off the growing threat of Tesla, the message was clear: This was not a 62-year-old engineer atop a hidebound business founded in the 1930s, but a dynamic mover and a shaker, ready to lead a revived company into a prosperous future.

I want to thank our employees for a sensational first half of the year!

It was difficult, but we achieved an enormous amount together. Thank you very much for your efforts. I hope that you are recovering in your holidays. @VWGroup @Autostadt pic.twitter.com/52ubUtR0AD

Since then, it’s been a bumpy ride.

The crippling global shortage of semiconductors has slowed VW’s production lines, causing a 24 percent drop in third-quarter deliveries and a sharp fall in profit, eroding the stock price. Workers are increasingly unhappy that temporary furloughs, introduced to prevent layoffs during the coronavirus pandemic, have been extended by the company.

Meanwhile Tesla, VW’s new leading rival, has hit a string of milestones. Tesla’s stock value has soared beyond $1 trillion. Its Model 3 recently became Europe’s best-selling car, the first electric car and the first vehicle from outside Europe to do so, according to Jato Dynamics, a market research firm. And 100 miles east of Wolfsburg, Tesla’s new $7 billion plant could begin producing cars within weeks.

As Volkswagen workers grumbled about their lack of work, their chief executive kept up a steady stream of adventures on social media, riding a Porsche e-bike in the Alps and driving one of the company’s electric ID.3 models across Austria to demonstrate its battery longevity.

But when Mr. Diess, who turned 63 last month, recently let slip that up to 30,000 jobs may eventually need to be cut in Wolfsburg as the company pivots production toward electric vehicles, labor leaders said workers had seen enough.

“You regularly provide us with nice photos of your excursions, but unfortunately still not with semiconductors,” Daniela Cavallo, a senior labor representative at Volkswagen and member of its supervisory board, told Mr. Diess at a staff meeting this month.

“Stop speculating about job cuts,” she said, “and work out solutions together with us.”

Since then, a committee within the supervisory board has been summoned to address the tensions between the two sides, fueling speculation over whether Mr. Diess’s job could be on the line. Lists of possible successors began circulating.

A rare outsider chosen from BMW three years ago to lead the world’s second-largest carmaker, Mr. Diess (pronounced DEES) was charged with a two-pronged challenge: regaining the trust of customers who turned their backs on VW after the diesel scandal and turning the company into a powerhouse of electric mobility, able to counter Tesla’s rise in the European market.

Since taking over, he has sought to open up a company known for its insular culture to a wider public, and has focused on the need for VW to develop its own batteries and software. All the while, he never seems to miss an opportunity to compare Volkswagen to Tesla, often unfavorably.

“We need a new mind-set at Volkswagen AG to take on the new competition,” Mr. Diess posted on his LinkedIn page after having Elon Musk, Tesla’s chief executive, speak at a VW managers retreat in October. “We did many things right in the past, in the old world Volkswagen is strong, but there is no guarantee for the new world.”

While VW’s employees may chafe at their chief’s style, many others believe that such blunt tactics are the only way that a company steeped in tradition (some of its production facilities are on local registers of historic places) will be able to compete with a Silicon Valley start-up.

“One thing that Diess does that is positive, he keeps repeating — even when no one in Wolfsburg wants to hear it — that Tesla is the benchmark,” said Stefan Bratzel, director of the Center of Automotive Management in Bergisch Gladbach, Germany. “He is using Tesla to create pressure within the company for a necessary transformation.”

But Mr. Bratzel cautioned that Mr. Diess needed the support of the company’s workers, whose representatives hold half the seats on the 20-person supervisory board, which hires and fires executives and sets strategy. Another two members, the representatives from the German state of Lower Saxony, which owns 20 percent of the company, tend to vote with the workers.

The situation at Tesla is starkly different: Mr. Musk has resisted efforts to unionize the company’s workers.

“Tesla ends the Golf era with its Model 3,” said a headline in the German national daily Die Welt. “THIS makes Tesla better than VW,” declared the nation’s mass-circulation Bild newspaper in an article that stressed the California company’s innovation and speed in bringing new ideas to market.

Mr. Diess repeatedly stresses the gap in efficiency between the two companies. He points out that while Tesla aims to assemble a car in 10 hours at its new plant, workers in Volkswagen’s factory in Zwickau take three times as long to produce an electric ID.3 or ID.4. A planned revamping at the plant in the coming year will shave 10 hours off that production time, but leaving it still twice as long as the time envisioned at Tesla.

This month, Ralf Brandstätter, who heads the Volkswagen brand division, announced that the company was considering building a new factory, from the ground up, for its fast-charging Trinity electric sedan, scheduled to be introduced in 2026. The idea of a new plant is nothing short of radical for Volkswagen, which has been assembling the Golf, now in its eighth generation, in the 1930s-era factory where the first Beetles were made.

“Within five years we want to make the location into a global lighthouse for the most modern and efficient vehicle production,” Mr. Brandstätter said.

Employees welcomed the proposal, which Ms. Cavallo stressed had been developed with labor representatives with an eye to retaining the Wolfsburg-based work force. But observers pointed out that for a company seeking to prove its agility and quicken its reflexes, the timeline was too long.

“What Tesla has done in two years Volkswagen is saying will take five,” Mr. Bratzel said, pointing to how Mr. Musk began constructing his German factory before all the necessary permits had been issued — an audacious gamble that risked a court judgment ordering Tesla to tear down the new facility.

“The established German players have to be able to rethink their process, to figure out how it can be faster and more efficient,” Mr. Bratzel said. “Tesla is very good at that.”

A malnourished dog in Kelowna, B.C. is safe and sound after being found in terrible conditions. The BC SPCA says an Australian shepherd, Noelle, was...
Read more