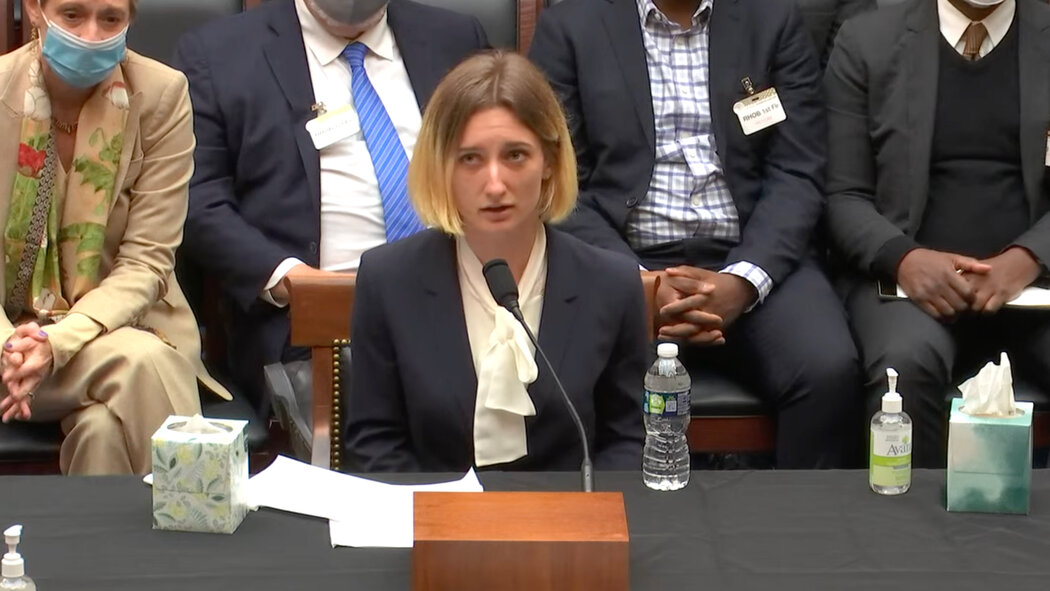 In emotional testimony before the House Judiciary Committee, four survivors of sexual misconduct said they had been required to stay silent because of “forced arbitration” clauses in their contracts.

Former employees of the technology company Afiniti, the broadcaster CBS and the luxury giant LVMH shared accounts of sexual abuse, rape and harassment with a congressional committee on Tuesday, experiences they said they had been required to keep quiet because they had signed contracts with “forced arbitration” clauses.

The testimony, which implicated executives at the companies, came as the House Judiciary Committee was considering legislation that would abolish forced arbitration for victims of sexual assault and harassment. Forced arbitration often requires an employee to go through a private proceeding with his or her employer after bringing an accusation of workplace misconduct, according to legislators.

Although arbitration clauses do not prevent employees from going to the police in the event of a serious crime, companies often make signing them a condition of keeping or getting a job. Paired with confidentiality clauses, they can have a chilling effect on reporting misconduct.

The witnesses were all women who worked in different fields and described a range of experiences of misconduct, from verbal harassment to outright assault. They testified for hours, under protection of congressional subpoenas.

Tatiana Spottiswoode said that in April 2016, she had begun working for Afiniti, a medical-device technology company founded by Zia Chishti, whom she described as a multimillionaire and a family friend who had known her since she was about 12 years old.

Ms. Spottiswoode, who was about 23 at the time, said she had signed a contract that included “an arbitration agreement with a strong confidentiality clause.”

Mr. Chishti harassed her for months and sent her an email describing a sexual fantasy in which he strangled her and grabbed her buttocks in front of other employees, she said. Then, during a business trip to Brazil, he sexually assaulted and beat her, Ms. Spottiswoode testified. When she hired lawyers and accused him of attacking her, she said, he filed for arbitration against her.

“He knew that the secrecy of arbitration would protect him,” Ms. Spottiswoode said.

She later said that she was “appalled” by how she had been treated and that she felt as if no one at the company had wanted to help her.

“I felt very unsafe,” Ms. Spottiswoode said. “I was very afraid for my life and well being.”

Natalie Cerny, a spokeswoman for Afiniti, said in a statement on Tuesday that the company had investigated Ms. Spottiswoode’s claims “with independent counsel and concluded that the arbitral decision she references was erroneous.”

The legislation, which was introduced by Representative Cheri Bustos, Democrat of Illinois, and Representative Morgan Griffith, Republican of Virginia, has bipartisan support and would end forced arbitration for survivors of sexual assault and sexual harassment.

An identical version of the bill was recently passed by the Senate Judiciary Committee. The House committee is scheduled to vote on the legislation on Wednesday. If it passes, it will go before the House for a full vote.

Sarah Parshall Perry, a legal fellow at the Heritage Foundation, a conservative think tank, testified against the legislation, saying that arbitration should not be conflated with confidentiality clauses. Under federal law, she said, employees are allowed to disclose what occurred in arbitration hearings, report what happened and take their complaints to other public agencies.

She warned that the legislation could force more cases into federal court and lead to longer, more expensive legal proceedings that would not benefit employees or hold “bad actors” accountable.

“The very premise of this hearing, that arbitration keeps victims of sexual violence and harassment in the shadows, suggests a solution to the problem of harassment and discrimination that’s ultimately misguided,” Ms. Parshall Perry said. “Curtailing access to arbitration would injure, in the end, the very people that Congress has sought for nearly a century to protect.”

But according to legislators, the clauses strip survivors of the right to decide how to pursue accountability, and instead their cases are heard in secretive proceedings that do little to stop systemic abuse from occurring again.

Lora Henry, who worked at Ken Ganley Kia, a car dealership in Medina, Ohio, said that her supervisor, Mike Gentry, had grabbed her buttocks, pinched her nipples and, on her birthday, showed up unannounced “with a bag of sex toys as ‘gifts.’”

She said that when she had complained, the company said “it was my fault” and that she had eventually been fired. When she filed a lawsuit, the company’s lawyers filed a motion to dismiss it, citing the arbitration agreement, she said.

Mark Koberna, a lawyer for Ken Ganley Kia, said that the dealership had “responded immediately” to her complaint, hiring a “third-party human resources consultant” to investigate. The consultant “was not able to substantiate the ex-employee’s claims,” Mr. Koberna said in a statement.

Mr. Koberna said Ms. Henry had been fired not for filing a complaint but for other reasons, which he did not specify.

Andowah A. Newton, a lawyer who worked for LVMH, a multibillion-dollar conglomerate of luxury brands including Louis Vuitton, Christian Dior, Dom Pérignon and Veuve Clicquot, said she had repeatedly been harassed by Lloyd Doran, the company’s director of property and facility operations.

After she was hired as director of litigation counsel at the company in 2014, she said, he lurked around her office and made a “lewd” comment. On one occasion, she said, he thrust his pelvis in her face while she was sitting in her office and then pinned his body against hers.

When Ms. Newton complained to company superiors, they ignored her claims or said she was “misinterpreting” his behavior, she testified.

Ms. Newton said that the company had hired an outside investigator, who told her that she would have a difficult time proving her case.

The investigator “also suggested that I should be grateful for and flattered by the harassment,” Ms. Newton said. She said she had found herself isolated at work, left out of important legal meetings and given poor reviews while Mr. Doran was promoted. Mr. Doran did not immediately respond to requests for comment on Tuesday.

In a statement, LVMH said that it “has clear policies prohibiting harassment and retaliation in the workplace and procedures to address any concerns raised, and they were followed.”

She said she had later learned that the contract she signed with CBS included a forced arbitration clause.

“Who would ever think up such a clause?” Ms. Dushku said. “Who were these clauses meant to favor and protect? It suddenly became clear: Not me.”

Chris Ender, a spokesman for CBS, declined to comment on Tuesday. After a mediation, the company agreed to a confidential settlement that would pay Ms. Dushku $9.5 million.

Myriam Gilles, a professor at the Benjamin N. Cardozo School of Law, told the panel that arbitration could be just as costly and protracted as litigation, noting that employers were able to hire teams of lawyers to fight their employees’ claims.

Forced arbitration, Professor Gilles said, allows companies “to hide and shield sexual predators” and keep employees from learning that other colleagues may also have been victims of the same person.

“Victims have to go it alone,” Professor Gilles said. “Never knowing about one another.”

Beauty influencers have become increasingly popular over the years, and 2023 is likely to be no exception. Social media has continued to be a...
Read more