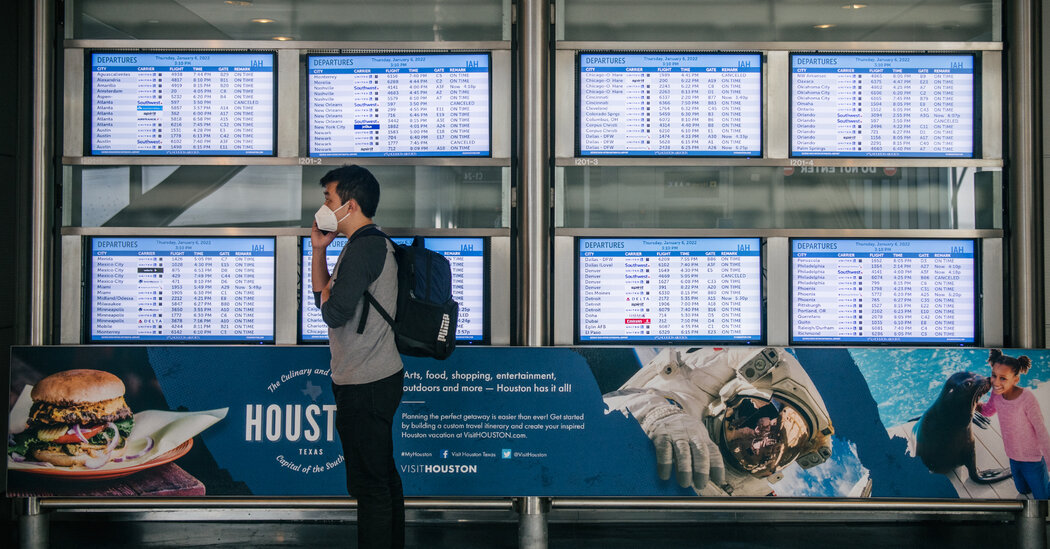 Airlines canceled thousands more flights in recent days as the industry tried to move past its holiday hangover.

Bad weather and coronavirus outbreaks among workers continued to disrupt schedules across the United States, but airlines have also called off many recent flights, in advance, so they can correct course at a traditionally slow time for travel without surprising customers with last-minute cancellations.

About 5,000 flights were canceled from Friday through Sunday, according to FlightAware, a data tracking service, with the daily number of cuts declining steadily over that period. Southwest Airlines suspended over 1,000 flights, more than any other carrier. SkyWest Airlines, which operates flights for several major carriers, and United Airlines each canceled more than 500 flights.

The turmoil began before Christmas, caused by bad weather in the West and staff shortages because of virus outbreaks among employees. Snowfall in the Northeast continued to wreak havoc at major airport hubs across the country into the first weekend of this month.

“Given the ongoing surge in Covid cases and related sick calls, we’ve been working with each of our major partners to proactively reduce our January schedules,” SkyWest said in a statement. The airline operates flights for United, Delta Air Lines, American Airlines and Alaska Airlines and said the pullback is intended to “ensure we’re able to adequately staff our remaining flying as we work to recover in the coming weeks.”

After canceling flights at high rates over the holidays, JetBlue Airways said it would preemptively cut about 1,300 flights in the first half of January. Alaska said in a statement last week that it would slash about one in 10 flights planned for the month to gain “the flexibility and capacity needed to reset.”

As in many other industries, airlines are also contending with workers calling in sick at high rates as the Omicron virus variant spreads at astonishing speed.

“It has been one of the most difficult operational environments we’ve ever faced,” Allison Ausband, Delta’s chief customer experience officer, said in a statement last week apologizing to customers for the disorder.

To deal with staffing shortages, many carriers have started offering extra pay to those who were otherwise not scheduled to work. Southwest, for example, said last week that it was offering double pay for most of the month to employees who picked up extra shifts, incentives available to workers across its operation, including ground staff, flight attendants, customer service employees, flight schedulers and maintenance technicians.

The chaos comes at a frustrating time for the industry, which is preparing for a significant rebound this summer. That recovery rests largely on the hope that the pandemic will be mostly under control by then and that people will be more willing to travel internationally and for work.