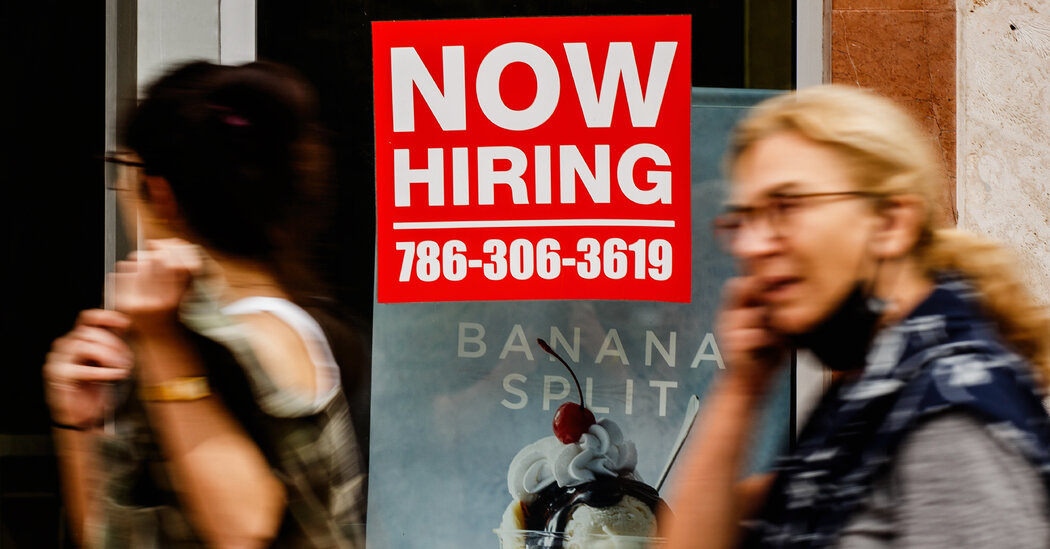 Job openings in the United States and the number of workers quitting their jobs remained near record highs in January, an indicator of demand for labor and of worker leverage.

The data, released by the Labor Department on Wednesday as part of its monthly Job Openings and Labor Turnover Survey, or JOLTS report, was another sign of an economy that wobbled slightly yet remained sturdy when faced with the Omicron wave of the coronavirus this winter.

Job openings dipped to 11.3 million, down slightly from a record in December, but were still up about 61 percent from February 2020.

In a potential sign of the impact wrought by the variant’s spread, several industries that had been rebounding from the pandemic, and had been most hungry for workers, reported fewer job openings. Accommodation and food services experienced a drop of 288,000. Transportation, warehousing, and utilities reported 132,000 fewer openings. But openings continued to increase in both manufacturing and the service sector at large

Some 4.3 million people left their jobs voluntarily in January, edging down somewhat compared with the record 4.5 million who quit in November. While layoffs picked up slightly in January, they were still hovering above historical lows.

For Jeffrey Roach, the chief economist at LPL Financial, the most fascinating current in the labor market is the increased share of workers who are quitting jobs not to make a career change but simply to achieve higher pay. “You can see people are actually staying within their industry — and it really helps the ‘lower-skilled’ worker,” he said. “I think we’ll continue to see really high churn rates.”

The share of Americans in their prime working years — ages 25 to 54 — who were either working or looking for work plummeted in 2020, yet it has recovered to a rate of 79.5 percent, within 1 percentage point of prepandemic levels, a much faster rebound than occurred after the last downturn.

The prevailing environment is likely to increase the price of labor — a welcome development for workers who have dealt with stagnant wages and a lack of power for decades, and an unsettling one for employers as high inflation increases the cost of doing business.

Some business executives and managers have expressed concern — in corporate earnings and in private calls — that “wage inflation” could set in and cut into profits if the rapid wage gains that workers achieved last year don’t taper off.

“When it comes to their business, they’re very concerned about it: What does that mean to their margins going forward, what kind of pricing power do they have?” said Steve Wyett, chief investment strategist at BOK Financial, a regional bank based in Oklahoma, where unemployment is notably low, at 2.8 percent. “How do we protect ourselves against this?”

Data from the Federal Reserve Bank of Atlanta shows that workers who quit to take other jobs are receiving larger pay increases than those who are staying put, though much of this movement is in lower-wage sectors.

After the Labor Department’s employment survey showed strong wage gains in January, hourly earnings were nearly flat in February. And even if wage gains stay strong, they remain far from runaway levels.

Fed data shows that median annual pay increases in the American labor market have been well within the range — 3 to 7 percent — that prevailed from the 1980s until the 2007-9 recession.