U.K. Aims to Ease Trucker Shortage With Visas Into 2022 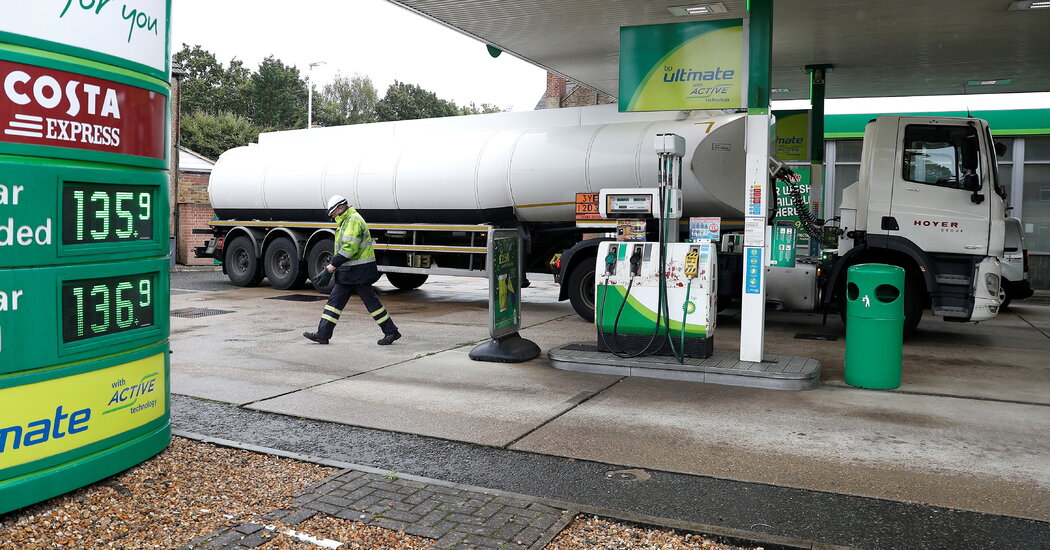 The decision extended an earlier move to offer three-month visas to foreign drivers, and came as the government also called on military drivers to help resolve a fuel distribution crisis.

LONDON — Britain’s government, under increasing pressure to ease a truck driver shortage and supply-chain issues that have left many supermarket shelves depleted and gas pumps dry, said on Saturday that it was extending the temporary visas being offered to thousands of foreign truck drivers into next year.

It also said that military tanker truck drivers would be deployed across the country on Monday to help deliver gas to gas stations.

The government’s announcement a week ago that foreign truck drivers and poultry workers would be allowed to work in Britain for three months — an effort to tide the country over through Christmas — drew criticism from British business leaders and the public. Ruby McGregor-Smith, the president of the British Chambers of Commerce, compared the move to “throwing a thimble of water on a bonfire.”

Long lines formed at gas stations across London and other parts of Britain this past week as motorists resorted to panic buying after some stations ran out of fuel. But unlike the widespread shortages that resulted from an OPEC oil embargo in the 1970s, this time the problem has been a dearth of trained drivers rather than a lack of fuel itself.

The country has a shortage of up to 100,000 truck drivers, according to the Road Haulage Association. About 20 percent of those are drivers who left Britain after it voted in 2016 to leave the European Union.

Keir Starmer, the leader of the opposition Labour Party, had urged the government on Friday to take “emergency action” to address the crisis. “We’re going to see this driver shortage problem coming back again in different sectors,” he said in a statement.

“It’s important to stress there is no national shortage of fuel in the UK, and people should continue to buy fuel as normal,” he said in the government’s statement. “The sooner we return to our normal buying habits, the sooner we can return to normal.”

He added that deliveries of gas to forecourts were now “above normal levels” and that gas demand was “stabilizing.”

Ben Wallace, the defense secretary, added that “while the situation is stabilizing, our armed forces are there to fill in any critical vacancies and help keep the country on the move by supporting the industry to deliver fuel to forecourts.”

About 200 military tanker truck personnel, including 100 drivers, will be deployed to relieve pressure on gas stations, the government said.

There is new technology in the form of AI-enabled insurance card scans, plus optical character recognition (OCR) and verification, that promises to help doctors...
Read more