Thousands of flights canceled over weekend as Omicron thins crews. 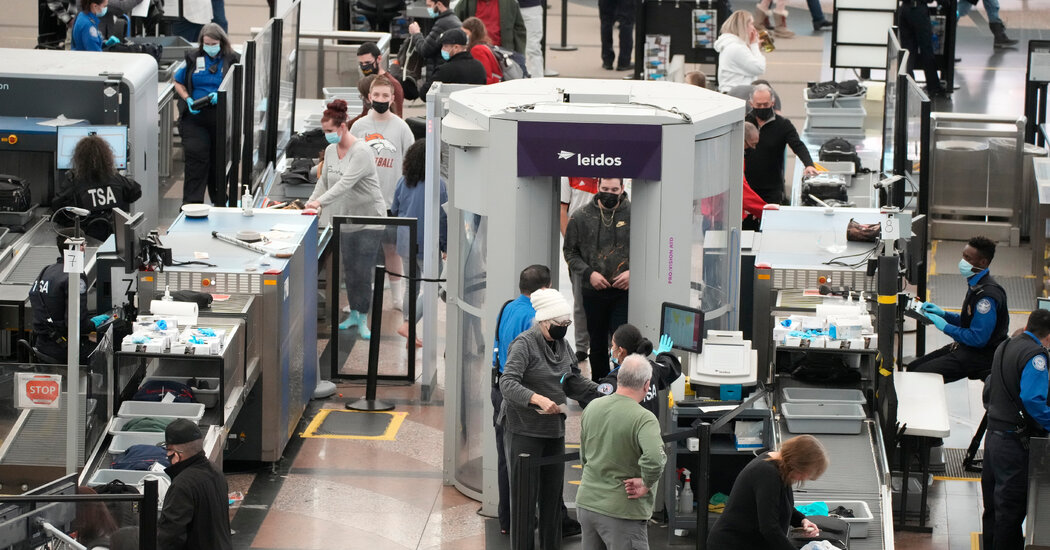 On Sunday alone, more than 1,000 U.S. flights and more than 2,500 international ones were canceled.

On one of the year’s busiest weekends for flying, airlines canceled thousands of flights as the Omicron variant of the coronavirus hit flight crews. The disruptions left thousands of travelers frustrated.

In all, about 2,000 U.S. flights were canceled on Saturday and Sunday of the Christmas holiday weekend, with roughly 3,000 more grounded globally, according to FlightAware, which provides aviation data. On Sunday alone, more than 1,100 U.S. flights and about 1,700 additional ones across the world were canceled.

While some of the groundings were caused by perennial problems like bad weather and maintenance issues, several airlines acknowledged that the current wave of Covid-19 cases, which has risen in the United States to a level not seen since last winter, contributed significantly.

A JetBlue spokesman, for instance, said the airline had “seen an increasing number of sick calls from Omicron.”

Southwest Airlines canceled just 63 flights, or 1 percent, according to FlightAware, and the cancellations were caused entirely by weather, said Dan Landson, a Southwest spokesman. “We haven’t had any operational issues related to Covid,” he said in an email. Along with United, Delta and American, Southwest is one of the four largest U.S. carriers.

Traveling rebounded sharply this year, making the situation at airports worse: Roughly two million people passed through screening checkpoints each day last week, according to the Transportation Security Administration. The numbers on Christmas Eve and Christmas Day were much higher than the equivalent figures last year, and some figures even exceeded those of the same days two years ago, when virtually no Americans were aware of a virus then beginning to circulate halfway around the world.

There were hints that the worst of the cancellations may be over in the United States. For instance, Delta was expecting to cancel about 200 flights on Sunday, fewer than the 300 it had predicted a day earlier, according to a spokeswoman, and it is forecasting only 40 cancellations on Monday.

On the other hand, airlines also expect lots of travel on Jan. 2, a Sunday. And the Omicron variant, which is now responsible for more than 70 percent of the new coronavirus cases in the United States, has already helped push daily case averages in the United States above 200,000 for the first time in nearly 12 months, according to The New York Times’s coronavirus tracker.

An airline trade group has asked the Centers for Disease Control and Prevention to shorten the recommended isolation period for fully vaccinated employees who test positive to a maximum of five days, from 10 days, before they can return with a negative test.

“Swift and safe adjustments by the C.D.C. would alleviate at least some of the staffing pressures and set up airlines to help millions of travelers returning from their holidays,” said Derek Dombrowski, a JetBlue spokesman.

The flight attendants’ union, however, has argued that reductions in recommended isolation times should be decided on “by public health professionals, not airlines.”

Some of this weekend’s delays had little to do with the pandemic. Alaska Airlines had instituted an extensive program to keep crews healthy and even had members of its management team who are trained to be crew members step in, said a spokeswoman, Alexa Rudin.

On Saturday and Sunday, it had only a handful of cancellations related to crew exposures to the coronavirus, according to Ms. Rudin. Yet it had canceled more than 110 flights those two days, according to FlightAware, including 13 percent of its Sunday flights, because of unusually cold and snowy weather in the Pacific Northwest, which affected its hub, Seattle-Tacoma International Airport.

“Snow and wintry conditions are creating a bit of a bah-humbug for our operations to and from Seattle,” the company said in a statement Sunday, adding, “We realize it’s incredibly frustrating when travel doesn’t go as planned.”

Ross Einfeld recalls how he felt when he realized his business, Kub Bakery, would have to close its doors for good. “It felt horrible,” he...
Read more

7 Productivity Hacks That Are on Sale for Black Friday

Disclosure: Our goal is to feature products and services that we think you'll find interesting and useful. If you purchase them, Entrepreneur may get...
Read more