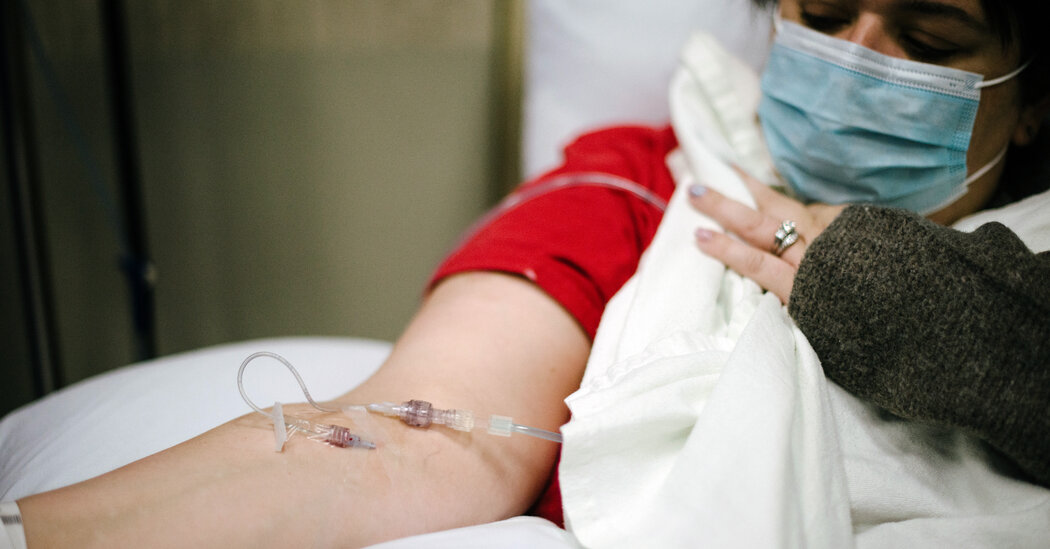 Championed by doctors and conservative radio hosts alike, monoclonal antibodies for Covid are in high demand — even from those who don’t want a vaccine.

Lanson Jones did not think that the coronavirus would come for him. An avid tennis player in Houston who had not caught so much as a cold during the pandemic, he had refused a vaccine because he worried that it would spoil his streak of good health.

But contracting Covid shattered his faith in his body’s defenses — so much so that Mr. Jones, nose clogged and appetite vanished, began hunting for anything to spare himself a nightmarish illness.

The answer turned out to be monoclonal antibodies, a year-old, laboratory-created drug no less experimental than the vaccine. In a glass-walled enclosure at Houston Methodist Hospital this month, Mr. Jones, 65, became one of more than a million patients, including Donald J. Trump and Joe Rogan, to receive an antibody infusion as the virus has battered the United States.

Vaccine-resistant Americans are turning to the treatment with a zeal that has, at times, mystified their doctors, chasing down lengthy infusions after rejecting vaccines that cost one-hundredth as much. Orders have exploded so quickly this summer — to 168,000 doses per week in late August, up from 27,000 in July — that the Biden administration warned states this week of a dwindling national supply.

The federal government, which was already covering the cost of the treatment — currently about $2,100 per dose — has now taken over its distribution as well. For the coming weeks, the government has told states to expect scaled-back shipments because of the looming shortages.

With seven Southern states accounting for 70 percent of orders, the new process has unsettled some of their governors, who have made the antibody treatment central to their strategy for enduring a catastrophic wave of the Delta variant.

More supplies are on the way. The federal government bought 1.8 million more doses this week, expected to arrive in the fall and winter. But for now, some hospitals are uncertain of supplies, state health officials said, even as patients keep searching for doses.

“We have providers struggling to get the necessary product,” Kody Kinsley, who leads operations for North Carolina’s Covid-19 response, said in an interview. “I think what has happened is a classic logistics issue, where all of a sudden there’s much more demand.”

Amid a din of antivaccine falsehoods, monoclonal antibodies have become the rare coronavirus medicine to achieve near-universal acceptance. Championed by mainstream doctors and conservative radio hosts alike, the infusions have kept the country’s death toll — 2,000 per day and climbing — from soaring even higher.

And after months of work by President Biden and Southern governors to promote the treatments, they have won the affection of vaccine refusers who said that the terrors and uncertainties of actually getting Covid had made them desperate for an antidote.

“The people you love, you trust, nobody said anything negative about it,” Mr. Jones said of the antibody treatment. “And I’ve heard nothing but negative things about the side effects of the vaccine and how quickly it was developed.”

Some Republican governors have set up antibody clinics while opposing vaccine mandates, frustrating even some of the drugs’ strongest proponents. Raising vaccination rates, scientists said, would obviate the need for many of the costly antibody treatments in the first place. The infusions take about an hour and a half, including monitoring afterward, and require constant attention from nurses whom hard-hit states often cannot spare.

“It’s clogging up resources, it’s hard to give, and a vaccine is $20 and could prevent almost all of that,” said Dr. Christian Ramers, an infectious disease specialist and the chief of population health at Family Health Centers of San Diego, a community-based provider. Pushing antibodies while playing down vaccines, he said, was “like investing in car insurance without investing in brakes.”

The government-supplied monoclonal antibodies, made by Regeneron and Eli Lilly, have been shown to significantly shorten patients’ symptoms and reduce their risk of being hospitalized — by 70 percent, in the case of Regeneron’s antibody cocktail. The treatments, given in a single sitting, use lab-made copies of the antibodies that people generate naturally when fighting an infection.

Patients and doctors alike overlooked the treatments during the wintertime surge of infections. But hospitals and health centers have now ramped up their offerings, transforming dental clinics, mobile units and auditoriums into infusion centers. In states like Texas, where elective surgeries have been postponed to make room for Covid-19 patients, operating room nurses have been enlisted to give infusions.

One factor driving the demand is that many patients, including vaccine skeptics, have been spreading the word about their seemingly miraculous recoveries.

“They’re like, ‘I have Covid, I want this treatment, my friend or family told me about this,’” said Jennifer Berry, the Houston Methodist nursing director of infusion services. “Now the word is out.”

At Houston Methodist, nurses administered nearly 1,100 treatments across eight sites in the first week of September, well more than twice as many as any week last winter. The hospital reduced the average time between orders and infusions to two days this month from three days in early August, giving patients a better chance of fighting off infections.

Juggling the infusions with more seriously ill Covid patients this summer forced the hospital, in one case, to move a monoclonal antibody clinic to a strip mall storefront.

But the Texas health department has helped, providing 19 nurses for a different Houston Methodist infusion clinic, said Vicki Brownewell, the lead administrator for the hospital’s program. The Biden administration has also invested $150 million in expanding access to monoclonal antibodies, and Houston Methodist has used federal money to arrange medical taxis for patients struggling with transportation.

Even so, the infusions remain inaccessible to many. Given the heavy demands on staff and the need to create separate infusion rooms for infectious patients, certain communities, especially in rural areas, do not have clinics.

In San Diego, Dr. Ramers said, some large, for-profit hospitals have decided not to administer the antibodies at all because of the logistical hassles, leaving wealthier, well-insured patients to hunt down doses at his publicly funded clinic. Some nurses that he hired for infusions left for short, better-paying assignments in hard-hit intensive care units.

“The natural, capitalist incentives for health care organizations that are for profit don’t really favor doing this,” Dr. Ramers said. “It’s a lot of work.”

Of the 2.4 million monoclonal antibody doses shipped nationally, at least 1.1 million have been used. Precisely how many are still sitting on shelves is hard to determine because of reporting gaps. Still, waning federal supplies and soaring demand from less-vaccinated Southern states have caused what several states have described as large shortfalls in deliveries.

North Carolina providers have requested 15,000 weekly doses, the health department there said, more than double what the federal government has allocated. Florida said its latest weekly allotment left clinics there 41,000 doses short of what they wanted.

Hospitals had previously been able to order the drugs themselves. But the Department of Health and Human Services will now decide how many doses each state receives based on case rates and use of the treatment. State governments, in turn, will decide on doses for individual sites.

The new ordering process, which the Biden administration said would ensure “equitable distribution,” has unsettled some backers of the drug. Gov. Ron DeSantis of Florida, a Republican, warned on Thursday that state officials were unprepared for the new responsibility of parceling out doses.

And in heavily vaccinated states, like New York, people coordinating treatments fear that shipments will plummet because of low case rates, leaving hospitals with so few doses that they shutter their programs. Some hospitals recently reported growing numbers of vaccinated patients receiving infusions.

Doctors have warned that antibody treatments alone cannot keep pace with ballooning outbreaks. Whereas any one vaccination protects untold others from exposure, a single infusion only helps a single patient. Infusions must be given within 10 days of symptoms; they are unhelpful to most hospitalized patients. And receiving the antibodies once does not keep people from becoming seriously ill if they catch the virus again later.

As a result, health officials have warned that vaccine skeptics may become so enamored of monoclonal antibodies that they become even more resistant to getting a protective shot.

Within days of his infusion, Mr. Jones, the patient in Houston, had left the bedroom where he had been quarantined and returned to his work as a landscape architect. But he was still weighing whether to be vaccinated.

His doctor was pushing for the shot, he said. But the monoclonal antibodies had worked so well that he was tempted to simply return for another infusion if he caught Covid-19 again.

“If I can go get an infusion and feel as good as I do right now, man, I’d rather not take a vaccine that has just been developed,” he said. “That makes me nervous, still.”

3 police cruisers, 1 vehicle into hydro pole after crash in Brampton