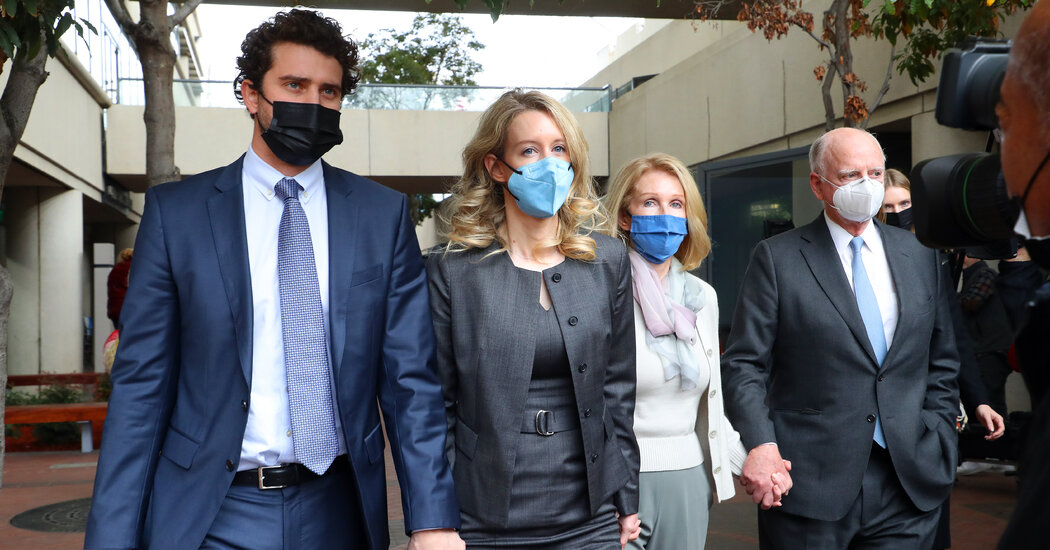 SAN JOSE, Calif. — Elizabeth Holmes, the founder of the failed blood testing start-up Theranos, was found guilty of four of 11 charges of fraud on Monday, in a case that came to symbolize the pitfalls of Silicon Valley’s culture of hustle, hype and greed.

Ms. Holmes, who had once promised to revolutionize health care, was the most prominent executive to field fraud accusations in a generation of high-flying, money-losing start-ups. A jury of eight men and four women took 50 hours over seven days of deliberations to reach a verdict, convicting her of three counts of wire fraud and one count of conspiracy to commit wire fraud by lying to investors to raise money for her company.

Ms. Holmes was found not guilty on four other counts related to defrauding patients who had used Theranos’s blood tests. The jury was unable to reach a verdict on three counts of deceiving investors, for which Judge Edward J. Davila of California’s Northern District said he planned to declare a mistrial.

Each count carries a maximum sentence of 20 years in prison, terms that are likely to be served concurrently. Ms. Holmes, 37, is expected to appeal. A sentencing date is expected to be set at a hearing on the three hung charges next week.

While the verdict was read, Ms. Holmes — who had falsely claimed that Theranos’s blood tests could detect a variety of ailments with just a few drops of blood — sat motionless. Then she gathered her belongings and whispered to her lawyer. She went down the row of family and friends in the court gallery behind her, hugging each one before leaving through a side door.

“It’s been a long case,” Judge Davila told the jury. “We collectively have been through many things.”

Stephanie Hinds, a U.S. attorney, said in a statement that the guilty verdicts reflected Ms. Holmes’s “culpability in this large-scale investor fraud.”

The verdict stands out for its rarity. Few technology executives are charged with fraud and even fewer are convicted. If sentenced to prison, Ms. Holmes would be the most notable female executive to serve time since Martha Stewart did in 2004 after lying to investigators about a stock sale. And Theranos, which dissolved in 2018, is likely to stand as a warning to other Silicon Valley start-ups that stretch the truth to score funding and business deals.

The mixed verdict suggested that jurors believed the evidence presented by prosecutors that showed Ms. Holmes lied to investors about Theranos’s technology in the pursuit of money and fame. They were not swayed by her defense of blaming others for Theranos’s problems and accusing her co-conspirator, Ramesh Balwani, the company’s chief operating officer and her former boyfriend, of abusing her. They were also not swayed by the prosecutor’s case that she had defrauded patients.

On Monday, jurors told the court that they were deadlocked on three of the charges of defrauding investors. Judge Davila pushed them to continue deliberating, but they were unable to agree.

The verdict arrived in a frenzied period for the tech industry, with investors fighting to get into hot deals and often ignoring potential red flags about the companies they were putting money into. Some have warned that more Theranos-like disasters loom.

In recent years, tales of start-up chicanery, from the bungled initial public offering of WeWork to the aggressive boundary-pushing tactics of Uber, have not slowed the flow of money toward charismatic founders spinning tales of business success. Those downfalls captured the public’s attention, but did not result in criminal charges.

Yet the Justice Department under President Biden has renewed its focus on white-collar crimes. “We will urge prosecutors to be bold,” Lisa O. Monaco, the deputy attorney general, recently said in a speech. “The fear of losing should not deter them.”

Ms. Holmes’s conviction sends a message to other founders and executives to be careful about their statements to investors and the public, said Jessica Roth, a law professor at Cardozo School of Law and former federal prosecutor in the Southern District of New York.

It “shines a light on the importance of drawing a distinction between truth and optimistic projections — and keeping that clear in one’s mind,” she said.

Ms. Holmes rose to prominence by mimicking the disruptive change-the-world chutzpah of Silicon Valley heroes like Steve Jobs — a playbook that has turned companies like Apple, Tesla, Google and Facebook into some of the most valuable in the world.

In the process, she captured the attention of heads of state, top business leaders and wealthy families with idealistic plans to revolutionize the health care industry. She traveled the world on private jets, was feted with awards and glowing magazine cover stories and lauded as the world’s youngest self-made female billionaire.

But she crossed into fraud when she lied about the accuracy, types and number of tests Theranos’s machines could do to raise funding and secure business deals.

“That’s a crime on Main Street and it’s a crime in Silicon Valley,” Robert Leach, an assistant U.S. attorney, said in opening statements at the trial’s start.

The verdict concludes nearly four months of proceedings that alternated between exhilarating and plodding. There were delays because of a coronavirus scare, a burst water pipeline, technology problems in the courtroom and juror travel. One juror was dismissed for playing Sudoku and another for her Buddhist faith. Crowds of spectators, many of whom followed the Theranos saga via podcasts, documentaries, books and news articles, waited for hours for a spot in the courtroom’s limited seats.

Inside, jurors heard from dozens of witnesses and viewed hundreds of pieces of evidence used in support of prosecutors’ argument that Ms. Holmes knowingly misled investors and patients on her rise to fame and fortune.

Witnesses included James Mattis, the former defense secretary who sat on Theranos’s board, as well as Lisa Peterson, who managed money for the wealthy family of a former education secretary, Betsy DeVos, and invested $100 million in Theranos. Prominent investors including Rupert Murdoch and Larry Ellison, as well as two former secretaries of state, George Shultz and Henry Kissinger, who sat on its board, were discussed but never called to the stand.

Before it shut down in 2018, Theranos voided two years’ worth of its blood tests. It paid to settle several investor lawsuits, as well as fraud charges by the Securities and Exchange Commission.

But prosecutors argued that Ms. Holmes’s actions went beyond those punishments — they were criminal. She led investors to lose hundreds of millions of dollars and patients to get unreliable test results, they said.

“At so many of the forks in the road, she chose the dishonest path,” John Bostic, an assistant U.S. attorney, said in closing arguments.

In her defense, Ms. Holmes’s lawyers tried to discredit testimony from whistle-blowers, attacked investors for not doing more research into Theranos and said Ms. Holmes’s failures were not a crime.

Ms. Holmes capped the proceedings by taking the stand. Over seven days of testimony, she alternated between accepting responsibility for certain missteps and deflecting blame for other problems to colleagues.

She said she believed that Theranos’s tests worked and had relied on the expertise of more qualified people running the company’s lab. And she used her charisma to sell jurors on the same vision of the future that, years earlier, had helped her win over investors, world leaders and the press.

Ms. Holmes’s argument that her optimistic projections were no different than that of other Silicon Valley companies contradicted the government’s evidence, which was consistent with traditional fraud cases, Ms. Roth said.

“If other founders and executives are engaged in the kinds of deceit that was alleged and proven by considerable evidence in this case, then they should be concerned,” she said.

Most strikingly, Ms. Holmes accused Mr. Balwani of emotional and sexual abuse. The pair dated in secret for more than a decade, even owning an estate in Atherton, Calif., together. Ms. Holmes said Mr. Balwani, who is around 20 years older, controlled every aspect of her life, including her schedule, self-presentation and time spent with her family. She also accused him of forcing her to have sex with him. Mr. Balwani has denied the allegations.

That testimony, delivered through tears, threatened to turn the tide against the prosecutor’s case by appealing to the jury’s emotions and painting Ms. Holmes as a victim. But it was a risky strategy, experts have said, particularly since Ms. Holmes did not provide an expert witness to put her accusations in context of the wire fraud charges.

Mr. Balwani, known as Sunny, will stand trial this year. He has also pleaded not guilty.

Ms. Holmes left the courthouse after dark on Monday, holding hands with her mother and partner. Cameras surrounded them, lighting up the dark sidewalk. As reporters shouted questions, Ms. Holmes avoided eye contact and stared straight ahead.