The New York Sun, a defunct newspaper, plans a comeback after a sale. 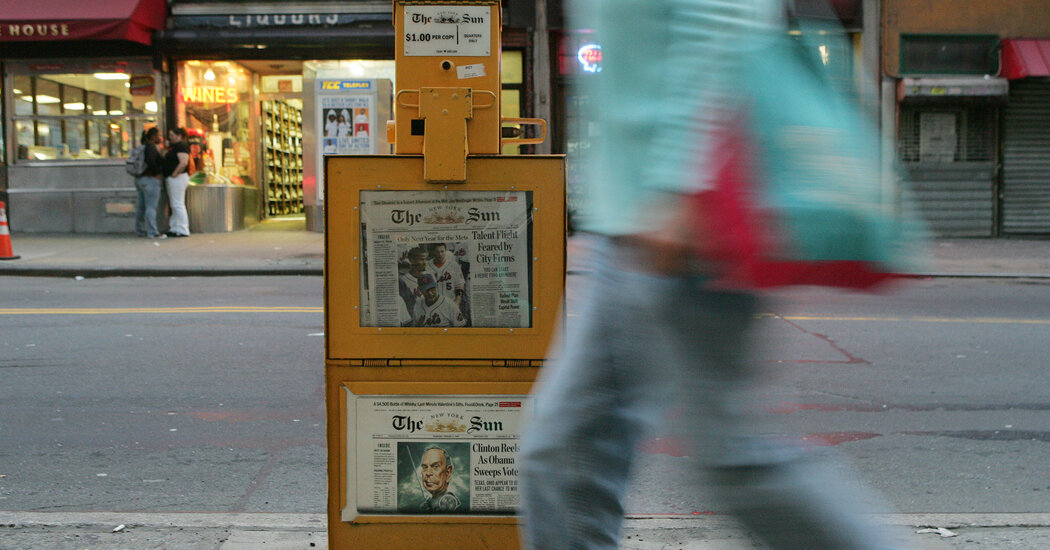 The New York Sun, a daily broadsheet that folded in 2008 after a six-year run, will make an online comeback under new ownership, the paper’s founding editor and its new owner said on Wednesday.

Seth Lipsky, the editor in chief and former owner of The Sun, sold the publication in a cash and stock deal to Dovid Efune, who until recently was the top editor of The Algemeiner, a Jewish-interest print and online publication based in New York, Mr. Lipsky and Mr. Efune said. They did not disclose the sale price.

For The Sun’s return, Mr. Lipsky will remain the top editor, and Mr. Efune will be publisher and chairman.

In an email interview, Mr. Efune praised The Sun for “practicing precisely the form of journalism that’s so lacking in today’s media environment: values-based, principled and constitutionalist.” There are no plans for a return to publishing print editions, he added.

The Sun was the brainchild of Mr. Lipsky, a former Wall Street Journal reporter and editorial writer. In 1990, he established The Forward, an English-language offshoot of the venerable Yiddish-language newspaper, and served as its editor for 10 years.

The Sun, which took its name from a New York paper published from 1833 to 1950, returned to newsstands under Mr. Lipsky’s direction in 2002 and quickly became known for its politically conservative tone. Before it stopped publishing print editions in 2008, it had more than 100 full-time employees.

Since The Sun laid off its staff and stopped appearing on newsstands, it has maintained a modest online presence, publishing opinion essays by Mr. Lipsky and his former business associate, Ira Stoll, and freelance contributors. The Sun’s website also gives space to the transcripts of monologues delivered by Larry Kudlow, the former director of the National Economic Council under former President Donald J. Trump, on his Fox Business program.

For The Sun’s comeback, Mr. Efune said he planned to expand the opinion section and hire journalists and editors to cover local and national politics, as well as culture and the arts.

The Algemeiner started as a Yiddish-language publication in 1972, switching to English in 2008, the year that Mr. Efune became its editor in chief. He said he gave up that role this year, but remains on the paper’s board.

The Sun is the second New York publication to make a return this year, following The Village Voice.

Mr. Lipsky said he had long been an admirer of Mr. Efune’s work at The Algemeiner, and was looking forward to working with him on journalism that supported “the American values of constitutionalism, equality under the law, and individual liberty.”