The Gospel of Rebecca Minkoff 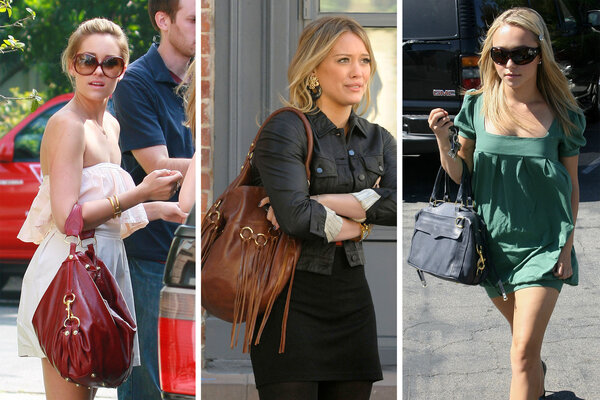 The designer Rebecca Minkoff takes issue with the widely accepted image of self-care: the turmeric lattes, the face masks in salt baths, the aromatherapy and massage, as she puts it.

“Work can be self-care, too,” she writes in “Fearless,” a book of business advice she drafted during the pandemic, published last week.

She’s particularly resistant to the notion that self-care can solve burnout — the feeling of acute exhaustion that has gained more attention recently. “There is no scented candle in the world that will make that feeling go away.”

Ms. Minkoff’s authority on burnout and lattes comes from working in fashion for two decades. In 2005, she founded her label with her brother Uri, after designing a purse called the Morning After Bag. The popular carryall became a fixture of countless mid-aughts paparazzi photos, hanging from the spindly forearms of starlets who wore low-rise jeans and accessorized with Starbucks cups.

Since then, Ms. Minkoff’s line has expanded from boho party-girl accessories to a full collection of clothing and shoes, priced accessibly. It has maintained a steady presence in American department stores and developed a reputation for embracing new technology — putting futuristic twists on runway shows (using drones or virtual reality, for example), selling wearables (before the Apple Watch) and opening a smart store. In 2019, before Covid-19 upended the fashion industry, the company said it brought in more than $100 million in retail sales.

But a few years ago, Ms. Minkoff found herself dreading returning to the office after maternity leave. People told her she was experiencing burnout (a “pseudo diagnosis,” she writes). Her solution: After little introspection about where her passion really laid, she dived even further into her work.

“The times that I’ve experienced burnout is when I hate what I do,” Ms. Minkoff said in an interview last month at her office in the Flatiron district of Manhattan, near the Home Depot where she once bought brass hardware for the Morning After Bag.

Thus she created rule No. 19 of her 21 rules “for unlocking creativity, courage and success,” presented in the new book: “Go beyond burnout.” Self-reflection cures burnout, she argues, not self-care.

Ms. Minkoff’s position won’t come as a surprise to anyone who reads rules 1 through 18, which chronicle how she built her company without any formal design education — moving to New York from Florida after high school without any significant connections or financial support from her parents — and how she has handled criticism and apathy from the “elite fashion clique,” an amorphous but influential group of editors, designers, buyers and executives who hold power in the industry.

Once, the owner of a popular showroom eviscerated the Morning After Bag in a meeting with Ms. Minkoff.

The owner, Cynthia O’Connor, told Ms. Minkoff it was the wrong size, made with the wrong materials, and its quality failed to justify the $600 price tag. (“I literally tore her bag apart with my words,” said Ms. O’Connor, who acknowledged, 15 years later, that she could “be a little harsh” about handbags.)

Ms. Minkoff offers details of these setbacks with humor and candor. But one aspect of her life goes unaddressed: her membership in the Church of Scientology, which was founded upon another self-help book, L. Ron Hubbard’s “Dianetics.”

While she hasn’t spoken publicly about them before, Ms. Minkoff said she does not hide her beliefs. “I’m totally open,” she said. “But it’s not my job to proselytize.”

Over the years, she said, people have expressed confusion that she identifies as both Jewish and a Scientologist.

“I think there’s a lot of confusion when people hear the word ‘religion’ — immediately you hear that I pray to L. Ron Hubbard,” she said. “I study it, I take classes and that’s the extent of it, and it’s helped me stay centered. I don’t have all the answers. When I needed someone, it was a place for me to go get some answers.”

Like other prominent Scientologists — some, such as the actress Jenna Elfman, are mentioned in “Fearless” as Ms. Minkoff’s early supporters — the designer refers to what she believed to be “horrific misinformation” about the church and its belief system, which she considers “more of a self-improvement philosophy.”

But her interest in self-improvement is also one reason her book exists, with assurances like: “Fear can be overcome. You have the power to take action.”

Over the years, Ms. Minkoff has embraced the world of entrepreneurship, gradually identifying more as a woman in business than a woman in fashion — the kind of woman who imbues her tough-love “real talk” with business-school vocabulary and Girlboss aplomb.

She hosts “Superwomen,” an interview podcast with guests like Jessica Alba and Barbara Corcoran, and in 2018 she co-founded a network of business owners called the Female Founder Collective. She once tried, unsuccessfully, as she writes in her book, to create a label to stamp on products made by women, inspired by those that certify products as cruelty-free or organic. In 2018, she also released an ad campaign around female empowerment, featuring Women’s March organizers, the actress Zosia Mamet, the former Fox News anchor Gretchen Carlson, and, somewhat controversially at the time, Melissa DeRosa, a top aide to Gov. Andrew Cuomo.

Ms. Minkoff is still the face of her brand; she models products on its Instagram and writes online marketing copy. (She took on this new role in the pandemic, after the company laid off half of its staff in March 2020.)

But aside from planning New York Fashion Week events, which she oversees entirely, she isn’t much involved in daily decision-making. Instead Uri Minkoff, her brother, runs the company as chief executive. And he shares a similar sense of pride in how they’ve survived the odds of being the overlooked kids in fashion’s cafeteria.

“There weren’t editors or stores waiting in line, glowing upon us as the next great ‘it’ thing. We got to go to the party and stay at the party because we were performing and because it was successful,” said Mr. Minkoff, who came to fashion from the tech world, and who peppers conversation with quotes from Marc Andreessen and “Animal Farm.” “Looking back, there was this trial by fire every step of the way, and fighting tooth and claw.”

It is that fight — not feeling “cool enough or connected enough or successful enough or rich enough” to be in the inner circle of fashion, as Ms. Minkoff puts it — that helped turn her into the striver she presents in her book.

It is why she believes burnout can be eradicated by working harder. It is why, when that showroom owner tore apart the Morning After Bag, Ms. Minkoff did not defend her artistic vision but followed Ms. O’Connor’s advice, making changes to her design. It is why she pivoted to entrepreneurship, a world where being cool mattered less than having ideas and confidence.

It is why she titled her book “Fearless,” even though she still feels fear around fashion weeks, and the future, and raising three children in a pandemic, and the rising cultural backlash against female founders.

Home buyers looking in Ontario can expect competition to remain high despite data from the Canadian Real Estate Association (CREA) suggesting a cooling off...
Read more