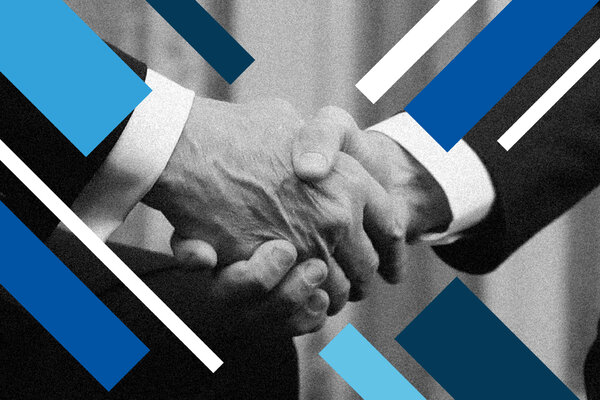 It’s been a record-breaking and eye-opening year for all kinds of transactions in the corporate world.

Deals of the year

By nearly any measure, deal making in 2021 was one for the record books.

“These are activity levels that I have never seen before at any time, having been in the business over the last quarter-century,” said Stephan Feldgoise, Goldman Sachs’s co-head of global M&A.

Many corporate boards felt pressure from investors to bulk up their businesses, propelling M&A higher. Others were ordered to slim down and focus, with General Electric, Johnson & Johnson and Toshiba all announcing plans to split their operations within days of each other, generating more transactions — and fees for their advisers.

Private equity deal making was on fire, with a record $1.1 trillion in deals struck this year, according to Refinitiv. Feldgoise said that’s because buyout firms have enjoyed huge returns on asset sales and, having raised enormous war chests in recent years, have more money than ever that they need to put to work.

Yet, what was by far the hottest deal trend of 2020, the special-purpose acquisition company, quieted down after a rollicking start to 2021. Experts chalk up the drop to a glut of blank-check funds hitting the market: SPACs comprised 20 percent of mergers in the first quarter. The flood of SPACs made it harder for these funds to raise financing, while poor post-deal performance and closer scrutiny by regulators interrupted the party mood.

Aside from these record-breaking trends, 2021 had plenty of memorable moments: Media moguls hatched audacious deals, geopolitics scrambled companies’ plans and meme stocks became a thing. Here are some of the most consequential deal making developments of the year, according to the DealBook team. — Michael J. de la Merced

Dealmakers of the year: Step forward, David Zaslav and Keith Creel. Mr. Zaslav, the chief of Discovery, maneuvered himself to the helm of a blockbuster media deal that combined his firm with AT&T’s larger WarnerMedia unit in a $43 billion deal. Mr. Creel, who leads the railroad operator Canadian Pacific, beat out his former employer, Canadian National, in a long-running bidding war for Kansas City Southern that had more twists and turns than a steep mountain pass. What’s more, his $31 billion winning bid was lower than the rival offer, but won the day when it brought more regulatory certainty.

Dealbreakers of the year: Hello, Lina Khan and Gary Gensler. As part of his push to rein in corporate power, President Biden’s picks to run key regulatory agencies — Ms. Khan at the Federal Trade Commission and Mr. Gensler at the Securities and Exchange Commission — rattled boardrooms and trading floors from Wall Street to Silicon Valley. Big Tech firms preemptively petitioned for Ms. Khan to recuse herself from antitrust investigations and Mr. Gensler’s speeches about tightening rules for crypto, SPACs and other industries made waves.

Deal that captured the 2021 zeitgeist: In the year of the meme stock, Robinhood reigned. The no-fee brokerage firm, whose app was the tool of choice for traders who fueled the frenzy in GameStop, AMC and others, went public in July and briefly became a meme stock itself. It has since given up its early gains, like many other meme stocks.

The deal that never was: The $30 billion acquisition of Willis Towers Watson by Aon was announced with great fanfare — for an insurance deal — in March 2020, and things went slowly downhill from there. The Justice Department sued in June this year to block the deal, and the companies gave up about a month later, rather than fight it in court. It was the Biden administration’s first challenge to a potential merger, and its success set the tone for a broader push against corporate consolidation.

Do-over deal: Less than a week after Didi’s blockbuster initial public offering in New York in June, China cracked down on the Beijing-based company, halting new user sign-ups and ordering it off app stores. Caught in the escalating tension between China and the United States, Didi’s time in New York didn’t last long: Six months after its I.P.O., during which its market value fell by half, Didi announced that it would delist from New York and shift its shares to Hong Kong.

Deal of the year, D.C. edition: What started as a $2 trillion proposal that included money for “human infrastructure” like home health care emerged from the horse-trading process as a narrower $1 trillion package focused on the physical upkeep of roads, bridges, public transit and broadband internet. Still, President Biden’s bill, signed into law last month, represented the largest investment in infrastructure in more than a generation — and an increasingly rare example of bipartisan compromise.

Crypto’s coming out party: It was a big year for all things crypto, but Coinbase stood out. The cryptocurrency exchange’s public listing in April, which saw its value climb to nearly $90 billion on its first day of trading, marked the moment that dealing in digital tokens went mainstream. Well, that and all the crypto firms hiring lobbyists in Washington.

Trader of the year: Some investors rely on sophisticated algorithms to tell them when to buy and sell. The richest man in the world just runs a Twitter poll. He asked his millions of followers if he should sell 10 percent of his considerable holdings in Tesla, they said yes, and he obliged. The abrupt sale of more than $10 billion in stock, and counting, made more sense when it became clear that Mr. Musk was already facing a huge tax bill for exercising stock options due to expire. Also, he regularly demonstrated his ability to move the price of Bitcoin with his tweets — and managed to give Dogecoin a shout out on “Saturday Night Live.”

SPAC innovation attempt of the year: Bill Ackman’s $4 billion special purpose acquisition company is the largest ever raised, and when it identified a deal target this year, it broke more new ground: A complex proposal to buy 10 percent of Universal Music, which unexpectedly spawned a new species of blank-check firm as part of the transaction. Alas, the deal was rebuffed by regulators and the SPAC was hit with a lawsuit. The billionaire’s hedge fund bought the Universal stake instead, but he pressed ahead with his plan for a new type of vehicle, which he called a SPARC, that he said improves on the traditional SPAC structure. In a SPARC, investors put in no money upfront and sponsors, like Ackman, have no deadline to find a merger partner. It’s a blank check for a blank check. (Regulators are wary of that, too.)

Most shocking SPAC deals: Electric vehicle makers have charged into SPAC mergers, but some high-profile companies short-circuited this year: Nikola and Lordstown ousted their chiefs as they struggled to fulfill lofty promises. (Nikola’s Trevor Milton was later charged with fraud.) Speaking of lofty promises, a spate of electric flying taxi companies also inked SPAC deals this year, and some found the going as tough as for their ground-based counterparts: Archer Aviation was mired in a legal battle over trade secrets shortly after announcing its merger with a SPAC.

Deal we didn’t see coming: Ken Griffin, the chief of the hedge fund Citadel, won an auction for a rare original copy of the U.S. constitution with a bid of $43.2 million — beating out a group of crypto traders who had pooled millions of dollars to bid on the document.

Deal we should have seen coming: Former President Donald Trump, no stranger to complicated financial dealings, entered the world of SPACs via a convoluted deal to take his start-up social media company public. Shortly thereafter, the blank-check company, Digital World, disclosed that it was being investigated by the S.E.C.