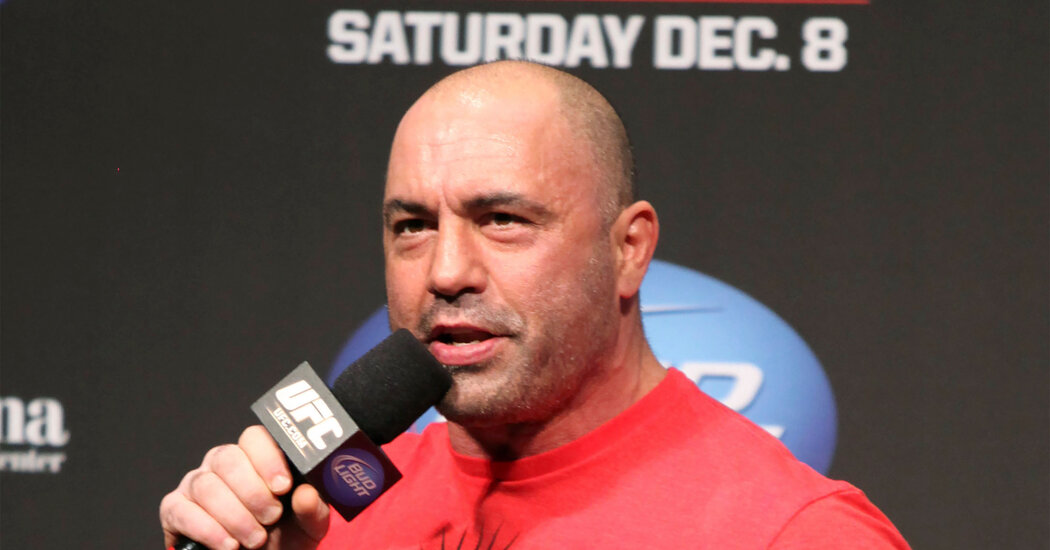 Spotify is not canceling Joe Rogan.

Two weeks into an evolving and far-reaching controversy over its star podcaster, who has been accused of spreading misinformation about the coronavirus, and condemned for his past use of a racial slur, Spotify has faced growing pressure to take a stronger stance about the podcasts it hosts.

But in a memo to employees over the weekend, Daniel Ek, the company’s chief executive, discussed the recent removal of a number of episodes and made it clear that it would not drop Rogan’s show, “The Joe Rogan Experience.” That show has been exclusive to Spotify since 2020, when the company made a licensing deal with Rogan that has been reported to be worth $100 million or more.

“I do not believe that silencing Joe is the answer,” Ek wrote in the memo, which Spotify provided to The New York Times. “We should have clear lines around content and take action when they are crossed, but canceling voices is a slippery slope.”

Ek also confirmed that Spotify recently removed dozens of episodes of “The Joe Rogan Experience” after a compilation video was shared online by the singer India.Arie showing Rogan repeatedly using a racial slur on his show. In a video over the weekend, Rogan apologized and called it “the most regretful and shameful thing that I’ve ever had to talk about publicly,” though he also said that at the times he made those comments — over 12 years of his podcast, Rogan said — he had believed that they were acceptable in context. Many commentators found that apology insufficient.

In his memo, Ek said that Rogan made the decision to remove the episodes, which appear to number about 70, after meetings with Spotify executives and after “his own reflections.”

Ek also said that Spotify would invest $100 million for the “licensing, development and marketing” of music and other forms of audio “from historically marginalized groups.” What that would entail was not immediately clear. Spotify licenses most of its music from record labels and music distributors, and music from Black artists and other minorities are among the most popular on the platform; Spotify has also promoted minority podcasters with its “Sound Up” program, for example. Representatives of the company did not respond to a request for clarification.

Since Jan. 24, when Neil Young demanded that his music be removed from Spotify, citing complaints from health professionals about Covid-19 misinformation on Rogan’s show, the company has faced a mini boycott from musicians, and constant criticism online. Joni Mitchell, Arie and Young’s sometime bandmates in Crosby, Stills and Nash, have all pulled their music. A handful of other artists, like the alternative band Failure, have followed suit, while others have staged protests of various kinds. The band Belly, for example, added a “Delete Spotify” banner to its own Spotify profile page, and explained on social media that for many artists, removing their music from the service is easier said than done.

In media circles, Spotify’s stance over Rogan has also raised questions about the responsibility of online companies to police the content on their platforms. In recent years, Facebook, Twitter, YouTube and others have come under frequent attack for the content they host, usually about politics or the pandemic. They have responded with a variety of measures, but tended to avoid labeling themselves as publishers.

That stance has been more difficult for Spotify, given its exclusive deal with Rogan. In his memo, Ek doubled down on recent comments denying that Spotify is Rogan’s publisher. In a company town hall last week, he told employees that despite its exclusive arrangement with Rogan, Spotify did not have advance approval of his shows, and could remove his episodes only if they ran afoul of Spotify’s content guidelines. (Spotify released those platform rules for the first time last week; it was not clear whether the episodes that were removed last week violated them.)

In his letter, Ek alluded to growing employee discontent about that position, and said he was “wrestling with how this perception squares with our values.”

“I also want to be transparent,” he added, “in setting the expectation that in order to achieve our goal of becoming the global audio platform, these kinds of disputes will be inevitable.”

One man was arrested after a shooting in the downtown core early Sunday morning. Hamilton Police say they were called out to the area of...
Read more