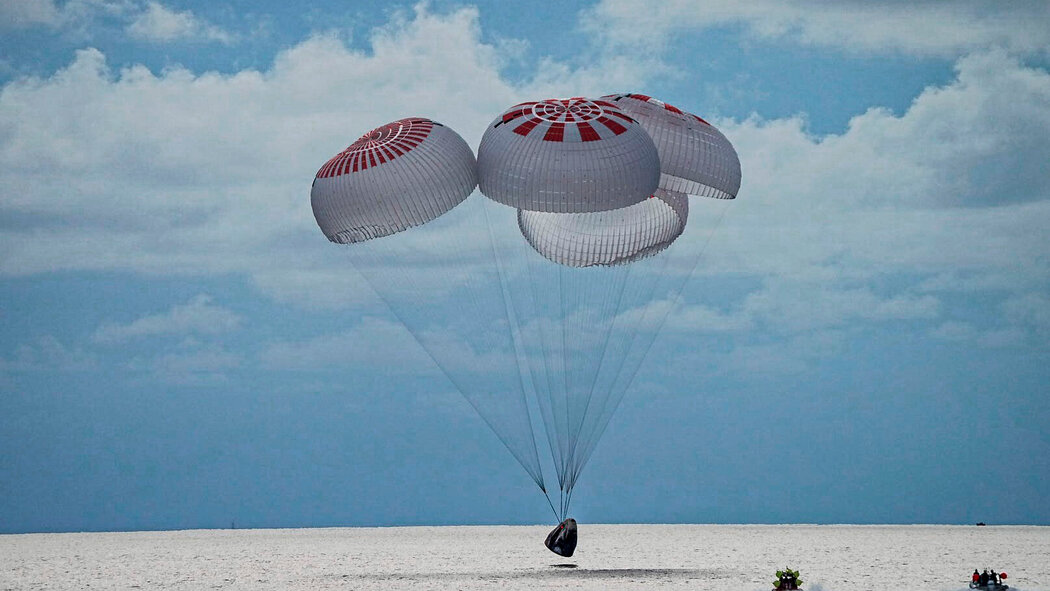 The mission hinted at what space travel could look like in a more accessible future, while remaining in reach now to only the richest of the rich.

After three days in orbit, a physician assistant, a community college professor, a data engineer and the billionaire who financed their trip arrived back on Earth, heralding a new era of space travel with a dramatic and successful Saturday evening landing in the Atlantic Ocean.

The mission, which is known as Inspiration4, splashed down off the Florida coast at 7:06 p.m. on Saturday. Each step of the return unfolded on schedule, without problems.

“Welcome home to planet Earth,” Kris Young, space operations director at SpaceX, said to the crew as the capsule bobbed in the water. SpaceX, the rocket company started by Elon Musk, built the Falcon 9 rocket that launched the Inspiration4 mission as well as the Crew Dragon capsule where the astronauts spent the past three days

“Your mission has shown the world that space is for all of us and that everyday people can make extraordinary impacts in the world around them,” Mr. Young said.

“It was a heck of a ride for us,” Jared Isaacman, the 38-year-old billionaire who spearheaded Inspiration4, replied. “We’re just getting started.”

About an hour earlier, the capsule, named Resilience, fired its thrusters for 15 minutes to drop out of orbit. The parachutes deployed, slowing Resilience to about 15 miles per hour as it hit the water. Within an hour, all four crew members walked out of the spacecraft, one at a time, each beaming with excitement as recovery crews assisted them.

It was the latest achievement in a year of spaceflight milestones.

A couple of months ago, two celebrity billionaires — Jeff Bezos, founder of Amazon, and Richard Branson, leader of the empire of Virgin companies — went to the edge of space in vehicles built and operated by companies they had started, perhaps the beginning of a wave of wealthy space tourists making brief up-and-down jaunts off the planet.

Mr. Isaacman, who is not nearly as well known as Mr. Bezos and Mr. Branson, has now gone much farther — to an altitude of 366 miles, higher than the International Space Station and the Hubble Space Telescope, and an orbital speed of more than 17,000 miles per hour.

His private spaceflight — the first ever to go to the orbit without a professional astronaut aboard — also aimed to illustrate what a more accessible future in space could look like. His three crewmates started out as strangers chosen to embody positive traits of humanity: hope, prosperity and generosity.

By the time they launched, the four astronauts were a close-knit group: Mr. Isaacman, a high school dropout who founded Shift4 Payments, a company that processes payments for restaurants and other businesses; Hayley Arceneaux, 29, a physician assistant at St. Jude Children’s Research Center in Memphis; Sian Proctor, 51, a community college professor in Phoenix who became the first Black woman to serve as the pilot of a space mission; and Christopher Sembroski, 42, a data engineer who lives in western Washington.

For a brief moment, there was a record 14 people in orbit at the same time: the four Inspiration4 crew members, three Chinese astronauts on the country’s nascent space station and an international crew of seven astronauts aboard the International Space Station.

On Friday, the Chinese astronauts returned to Earth. With the return of Inspiration4, the human off-Earth population is down to just the seven people on the International Space Station.

The Inspiration4 mission was the latest triumph for Mr. Musk. The Crew Dragon is the same spacecraft used to take NASA astronauts to and from the International Space Station.

Now, there might be a new market for private travel to orbit. “There’s tons of interest,” Benji Reed, the senior director of human spaceflight at SpaceX, said of flights in Crew Dragon during a telephone news conference after the splashdown. “And it’s growing now, a lot.”

Orbital spaceflight is still far too expensive for anyone except the richest of the rich, but by giving a chance to people who represent the larger society, Mr. Isaacman said he hoped to inspire a future generation to dream bigger.

The crew members underwent months of intense training, similar to what NASA astronauts have to learn before launching on SpaceX rockets.

The four astronauts appeared on the cover of Time magazine. Netflix produced a documentary series following their training, and a final episode recounting their flight will air at the end of the month.

Liftoff, on Wednesday evening, was on time and flawless. After a couple of thruster burns, the capsule was in orbit 366 miles above Earth, the highest astronauts have gone since a mission to repair the Hubble.

Then, at least for the general public, the mission went quiet for a day, with only a few bare-bones updates posted on Twitter. As a private mission and not one run by NASA, the crew had no obligation to make public appearances.

Their accounts on Twitter and Instagram, which were busily updated in recent weeks as they prepared for launch, stayed silent while in orbit.

The crew had a video call with patients at St. Jude. One of the children asked whether there were cows on the moon. “I hope there will be one day,” Dr. Proctor replied.

Upon landing, Inspiration4 had raised more than $160 million, including $100 million from Mr. Isaacman, for the hospital, which treats children at no cost to families and aims to discover cures for cancer and other diseases.

Late on Saturday, Mr. Musk of SpaceX said on Twitter that he would add a $50 million contribution, which would push the fund-raising effort over its goal of $200 million.

The crew members also had a call with the actor Tom Cruise. An online betting app also announced that Mr. Isaacman placed the first wagers from space.

On Friday afternoon, the crew members rang a closing bell they brought to orbit for the New York Stock Exchange and later, they presented a 10-minute live update on YouTube as they zoomed around the planet.

“We’re seeing the world every 90 minutes, that’s how fast we’re traveling around it, it’s pretty incredible,” Mr. Isaacman said during the broadcast from orbit.

Todd Ericson, the Inspiration4 mission director, said the crew had some sickness adjusting to space, but it was “pretty much identical” to what professional astronauts experienced. “That shows that average men and women are not any more or less prone to space adaptation syndrome than NASA astronauts,” Mr. Ericson said, “which I think is going to be some of the amazing science that this mission brings.”

The astronauts gave a quick tour of the spacecraft including the cupola — a glass dome at the top of the capsule where they could admire a 360-degree view of the cosmos. Dr. Proctor showed a drawing she had done. Mr. Sembroski played a ukulele. Ms. Arceneaux did some flips.

The commercial opening of space is to continue next month when Russia launches an actress and a film director to the International Space Station. They will be shooting scenes for a movie called “The Challenge.” It would be the first full-length fictional movie to be made in space.

In May 2020, Jim Bridenstine, then the administrator of NASA, confirmed that the space agency had talked with Mr. Cruise about shooting a film on the space station.

Since then, there has been no update about the progress of the movie or when Mr. Cruise may blast off.

Other entertainment projects in the works include a reality TV show, appropriately titled “Who Wants to Be an Astronaut?,” which is to air on the Discovery Channel. The winner is to launch on a SpaceX rocket to the space station.

After this mission, the Crew Dragon capsule used by Inspiration4 will be refurbished and used for another private mission that is to launch early next year. That mission, which is operated by the Houston-based company Axiom Space, is to take one professional astronaut and three customers, paying $55 million each, for a visit to the space station.

Sync your calendar with the solar system

Never miss an eclipse, a meteor shower, a rocket launch or any other astronomical and space event that’s out of this world.

Robert was recovering from frostbite on both feet at a pop-up St. Boniface Street Links warming space over the weekend, after spending hours outside...
Read more