Sometimes You Need a Map, Not an App 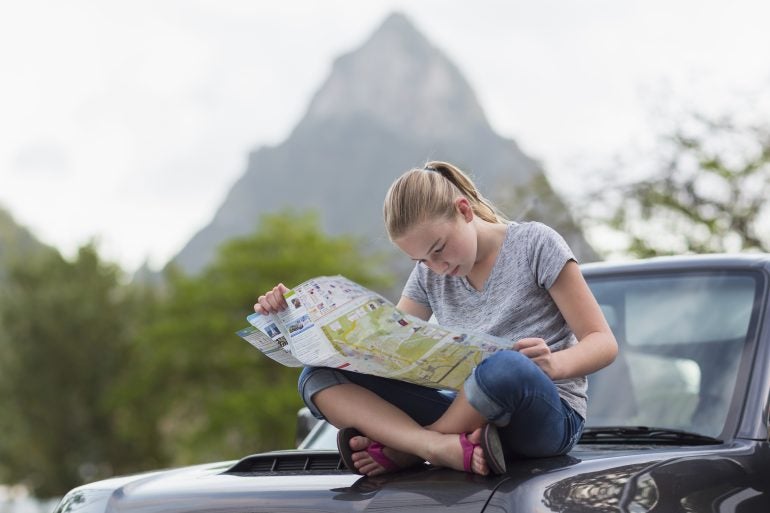 
This story originally appeared on NerdWallet

Believe it or not, there are still plenty of places in the U.S. where there’s no cell phone service and, as a result, no way of navigating with your smartphone on the spot.

You might have to use — brace yourself — a map.

Remember maps? They’re made of paper, and no matter how hard you swipe, tap or pinch, they don’t change. Maps don’t have pop-up ads or cookies that track your searches; they might have pictures of local attractions around their edges instead.

And while folding maps might be a lost art, reading them isn’t.

As my wife and I plan to drive cross-country, we’re bringing an atlas of maps as a backup. It’s bulky and you have to turn the pages. But we want to be prepared for the unexpected.

8 reasons to bring a map

It’s a good idea to bring a map on a road trip as a backup, says Michael Tischler, Ph.D., director of the National Geospatial Program at the U.S. Geological Survey, or USGS. “When I was a kid, we always had a Rand McNally road atlas in our car,” Tischler says.

But there’s more than just the nostalgia factor. Here are a few times when you could be glad to have an old-fashioned map:

1. If your phone battery dies. Yes, we do sometimes forget to charge our phones and even to bring a cord to charge in the car. Paper never runs out of batteries.

3. There’s no cell phone service. “GPS isn’t always 100% reliable,” says Linda Indolfi, director of publishing business administration and communications at AAA National. On our cross-country trip, we plan to visit Yellowstone National Park. Cellular service is “limited” in the park, according to the National Park Service website. “During summer the number of users can overwhelm cellular circuits,” the site says.

With this in mind, I visited my local AAA office and picked up a beautiful map of Yellowstone and another of Montana and surrounding states.

4. Trip planning. “Google Maps gives you access to a tremendous amount of information, but it’s mostly commercial information, such as the location of the nearest Starbucks,” Tischler says. “It doesn’t tell you how to recreate or what you might want to see in a national park.”

Glancing at my Yellowstone map, I could see the entire park and, looking more closely, useful details such as:

5. Brainstorming. It’s hard to gather around a smartphone screen and discuss the day’s plans. “But if you spread a map out on the hood of your car — that’s a conversation starter,” Tischler says.

6. Seeing the big picture. The scale of an online map “can be changed with the flick of a finger,” says Mark Anderson, a retired factory worker from Cleveland who enjoys long road trips and explores Civil War battle sites. He likes that the scale of a paper map is constant, which gives you a more accurate sense of distance when choosing a route.

7. Bridging the language barrier. If you’re in a foreign country and don’t speak the language, you can pull out a map and ask for directions. A friendly local can review the map with you and trace the route on it to your destination.

8. The memories. When the trip is over, a map with your route and stops marked is a great souvenir. The best ones make fine wall art. Try that with your phone.

Where to get maps

A 50-state road atlas is handy because it’s a good size and works everywhere, and you don’t have the hassle of folding it. An atlas is $10 to $25 and available online.

Most visitor centers at state borders or park entrances will have free maps. Additionally, many states will send you free maps through their visitors bureau. VisitCalifornia.com promises a map both “inspirational and informative.”

Then there’s the mighty AAA, which published its first maps over 100 years ago. With basic membership (varies, but about $65 a year), you not only get roadside assistance and towing, but you can also request maps of every state you plan to visit, parks along the way and city maps for more detail. You can also plan a trip online or go into any office for assistance.

While USGS maps don’t provide a lot of information for motorists, waterproof topographical maps can be purchased for hiking. In fact, Tischler says there’s been a recent uptick in map requests, indicating that, perhaps because of the pandemic, more people are getting away from it all.

The article Sometimes You Need a Map, Not an App originally appeared on NerdWallet.