Reporters Are Offered a Glimpse of Collapsed Condo Site 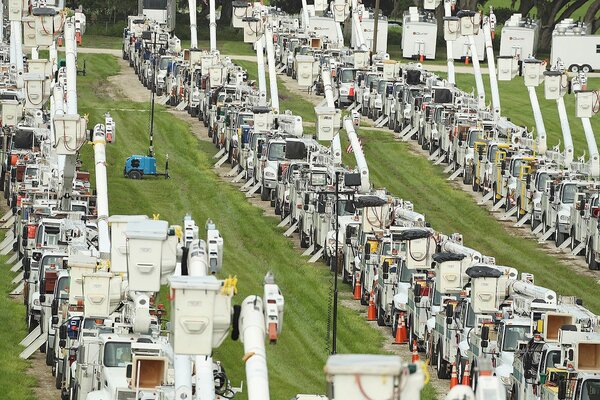 Under the gray skies of Surfside, Fla., uneasy storm winds blew through what was left of the Champlain Towers South as officials opened the site of a shocking condo collapse for the first time to a limited glimpse by the public.

The ruins of the condominium seemed enormous, a towering heap of floor tiles, broken walls, tossed air-conditioning units and jagged metal rods reaching out like claws — at least two stories high overall, too daunting for anyone to make sense of what it once encompassed.

But the wreckage also looked very small compared with the 13-story building that once stood, in stately brown and beige, its balconies jutting out over Collins Avenue on one side and a sandy Atlantic beach on the other. How could 135 units — 135 homes — and a still-unknown number of lives have been reduced to this, a damp and dusty pile of concrete and metal where a community once thrived?

With 36 people confirmed dead and 109 people still unaccounted for, workers at the rear of the site toiled on through the approach of Tropical Storm Elsa, which was expected to make landfall on Florida’s Gulf Coast on Wednesday morning. The Miami Beach area has been spared the worst of the storm, but more than 200 workers have endured crushing heat and rolling thunderstorms and lighting that forced them to pause their search at times.

Much of the search has been happening behind the wall of rubble, unseen from where reporters stood on the street.

The authorities allowed reporters on Tuesday evening to get a little closer to the remains of the condo complex that partially collapsed on June 24; the rest was demolished on Sunday because of safety concerns. The new vantage point offered a sobering look of the rescue site from across the street, a spot where not long ago a visitor might have walked past the entrance sign, up the steps and into the building’s lobby. Heavy machinery trawled at the back of the site, digging through the rubble in a search-and-rescue effort that has, day after heartbreaking day, yielded no signs of life.

Standing near the wreckage, it was not difficult to see why.

What had once been part of the roof of the residential tower at 8777 Collins Avenue was almost at street level, a dark splintered slab identifiable by a ventilation or exhaust fixture still in one piece, slanted atop the pile like a top hat. Debris poked out at every possible angle. Twisted metal knotted together like tree branches. Even the planters on the sidewalk were cracked, a few surviving palm trees withering away.

Almost everything was the same shade of brownish gray.

Nearer the front, emergency workers in bright hard hats and neon vests watched from balconies in the two neighboring buildings, one to the north and one to the south. On the street, two rescuers left and returned with a bite to eat. A small and fluffy crisis response dog stood nearby with its handler, apparently waiting to comfort workers as needed.

Motors rumbled from fire trucks, diggers and generators, the sound of a desperate search that has now gone on for nearly two weeks.

On the site of the tennis courts where residents once played, now stood site workers’ tents.

On the corner there was a sign, inviting neighbors to a relic of what seemed like another era, the weekly Surfside farmers’ market.

Search-and-rescue teams will continue searching for people in the rubble of Champlain Towers South after avoiding the worst of Tropical Storm Elsa, which is expected to make landfall on Florida’s Gulf Coast on Wednesday morning.

Forecasts last week suggested that the storm could hit the Atlantic Coast, incentivizing officials to quickly demolish the still-standing portion of the building in Surfside, north of Miami. But as the storm neared Florida, it became clearer that it was instead likely to strike north of Tampa.

The storm has the potential to dump up to nine inches of rain in some parts of the state before traveling north and bringing stormy conditions to Georgia and the Carolinas.

The search was still hampered by the storm on Tuesday, with crews forced to pause their efforts after nearby lightning strikes. Downpours and winds of up to 29 miles per hour could be felt in the Miami area, the National Weather Service said.

But the storm is now well northwest of the region where rescue efforts are nearing the two-week mark. The death toll is officially at 36, with more than 100 people still unaccounted for.

Stacie Dawn Fang, 54, was the first victim identified in the condo collapse. She was the mother of Jonah Handler, a 15-year-old boy who was pulled alive from the rubble in a dramatic rescue as he begged rescuers, “Please don’t leave me.”

Antonio Lozano, 83, and Gladys Lozano, 79, were confirmed dead by Mr. Lozano’s nephew, Phil Ferro, the chief meteorologist on WSVN Channel 7 in Miami. Mr. Ferro wrote on Instagram: “They were such beautiful people. May they rest in peace.”

Luis Andres Bermudez, 26, lived with his mother, Ana Ortiz, 46, and stepfather, Frank Kleiman, 55. Mr. Bermudez’s father confirmed his son’s death on social media, writing in Spanish: “My Luiyo. You gave me everything … I will miss you all of my life. We’ll see each other soon. I will never leave you alone.”

Manuel LaFont, 54, was a businessman who worked with Latin American companies. His former wife, Adriana LaFont, described him as “the best dad.” Mr. LaFont’s son, 10, and daughter, 13, were with Ms. LaFont when the building collapsed.

Andreas Giannitsopoulos, 21, was in South Florida visiting Mr. LaFont, a close friend of his father’s. He was studying economics at Vanderbilt University and had been a decathlon athlete at his high school. An image of him is on a mural outside the school’s athletic facility.

Leon Oliwkowicz, 80, and Cristina Beatriz Elvira, 74, were from Venezuela and had recently moved to Surfside, according to Chabadinfo.com, which said they were active in the Orthodox Jewish community in greater Chicago, where one of their daughters lives.

Marcus Joseph Guara, 52, lived with his wife, Anaely Rodriguez, 42, and their two daughters, Lucia Guara, 10, and Emma Guara, 4. Mr. Guara was remembered as a kind and generous man, a godfather to twins and a fan of hard rock music.

Hilda Noriega, 92, was a longtime resident of Champlain Towers South who enjoyed traveling and whose family described her “unconditional love.” Hours before the collapse, she attended a celebration with relatives.

Michael David Altman, 50, came from Costa Rica to the United States as a child, and was an avid racquetball player as a youth. “He was a warm man. He conquered a lot of obstacles in his life and always came out on top,” his son, Nicholas, told The Miami Herald.

It could take months for investigators to determine precisely why a significant portion of the Champlain Towers South in Surfside, Fla., collapsed without warning last month. But there are already some clues about potential reasons, including design or construction flaws, for the disaster.

Engineers who have visited the wreckage or viewed photos of it say that damaged columns at the building’s base may have less steel reinforcement than was originally planned. Even if there was a shortfall, some experts said it was unlikely to be the primary cause of the collapse.

Florida has some of the country’s strictest regulations on high-rise buildings, where coveted oceanfront views bring the sun, rain, wind and salty air that can cause structural damage. But the rules are not always enforced, with compliance sometimes taking years longer than required.

The condo board at the Champlain Towers South had for years struggled to convince homeowners to pay special assessments of up to $200,000 in order to begin major renovation projects. Delayed maintenance is an issue for homeowners’ associations around the country, with residents often hoping that future owners will pick up the tab for infrastructure repairs.

In the initial days after the collapse, experts began focusing on the bottom levels of the building where an initial failure could have set off a structural avalanche. Three years before the collapse, a consultant found evidence of “major structural damage” to the concrete slab below the pool deck and “abundant” cracking and crumbling of the columns, beams and walls of the parking garage.

Desperate to leave: Sailors face lack of options when trying to quit the Navy

'Get in line'In 2020, the most recent year for which full data is available, 580 military members died by suicide, a 16 percent increase...
Read more