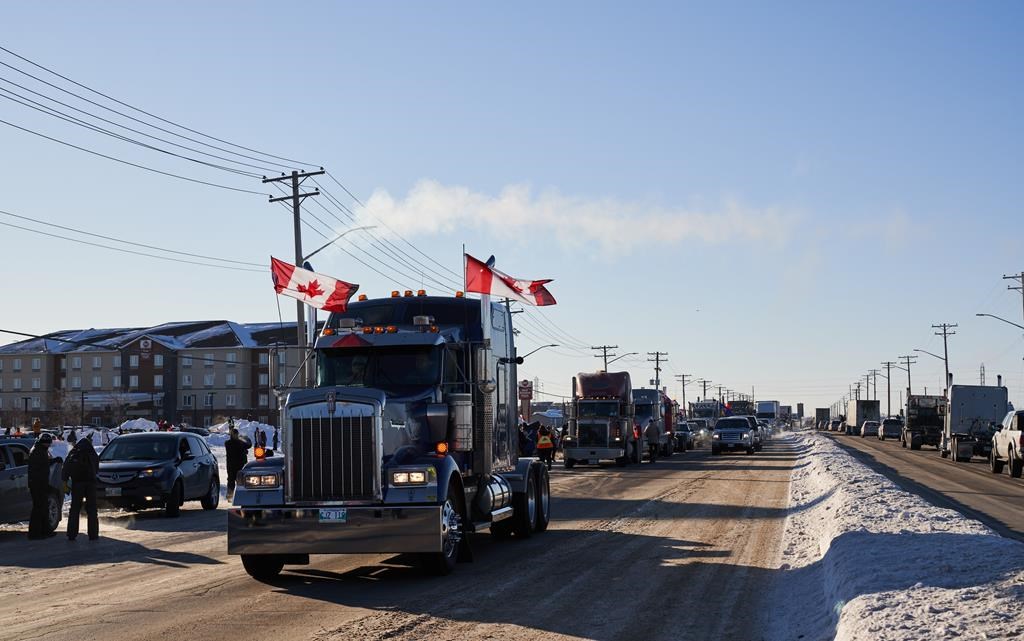 Convoys of truckers from across Quebec rolled by the Montreal area on Friday on their way to Ottawa for a weekend rally.

They’ll be joining hundreds of others on Parliament Hill to protest against COVID-19 government vaccine mandates.

From coast to coast, truck drivers against COVID-19 vaccination regulations have gathered.

Hundreds of people gathered in a show of support, lending a party atmosphere to a truck stop west of Montreal, located at Exit 17 just off Highway 40, while others waved flags from overpasses along the way.

The truck stop is where the Quebec contingent of truckers and other protesters met up before heading to the capital.

Traffic was backed up for several kilometres on Highway 40 west as the group motored down the road Friday afternoon.

“The mandate of the SQ during the demonstration is to maintain peace, order and then public safety,” said spokesperson Marythé Bolduc.

The Canadian Trucking Alliance has disavowed the protest and said more than 85 per cent of truckers are vaccinated. Many truckers have also posted on social media they continue to do their jobs and that the convoy doesn’t speak for them.

Michel, a trucker who wouldn’t give his last name, told Global News from the truck stop that he’s protesting because he’s fed up with the rules.

He described going to the restaurant where proof of vaccination is required and capacity limits apply as a hassle.

Supporter Debbie Doyle, agrees the protest is about more than the vaccine mandates.

“It’s about freedom for everyone to get back to their lives, their livelihoods, see their families their friends, have children socialize normally, have our sports competitions, to be able to go to a show and a movie,” she said.

Meanwhile, the Quebec government says public health measures that have been put in place are there to protect the population and bring an end to the pandemic.

“People can certainly express their views, but it has to be done in an orderly way,” said parliamentary leader and Justice Minister Simon-Jolin Barrette.

Earlier this week, Premier François Legault announced a gradual loosening of restrictions with restaurant dining rooms and children’s sports set to resume on Monday, with cinemas to open the following week.

The province’s interim health director, Dr. Luc Boileau, said during a COVID-19 update on Thursday that while modelling predictions show a decrease in hospitalizations, the health network remains fragile.

Because of that and with a slow uptake of COVID-19 booster shots, a  week-by-week reopening is the safest way forward, he said.

Are You Achieving a Work-Life Balance? Not Even Close

Americans spend a significant amount of time working and looking at screens, but the majority don’t take enough time off.Are You Achieving a Work-Life...
Read more