Putin Faces Sanctions, but His Assets Remain an Enigma 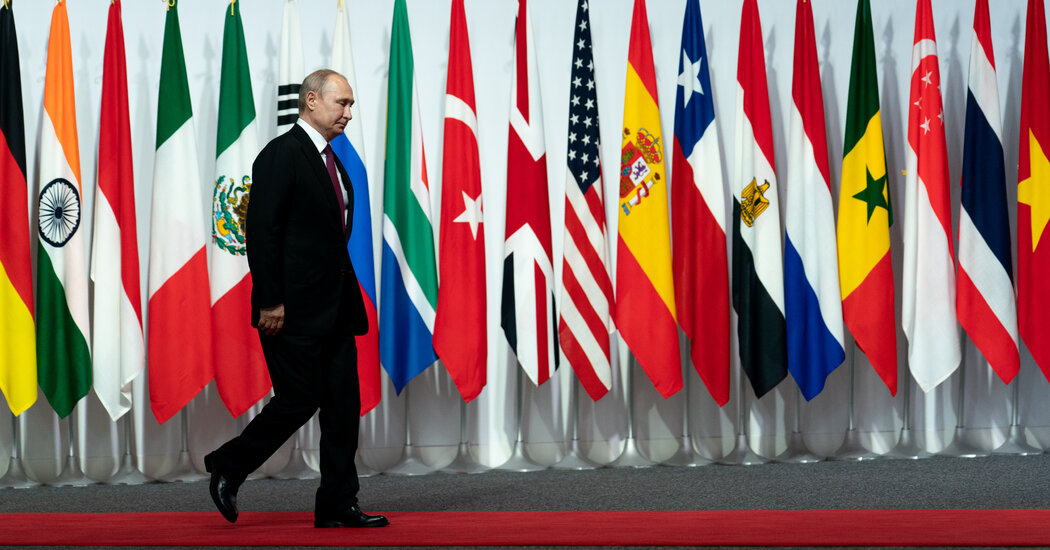 On paper, the Russian president appears to own very little. Yet estimates put his hidden wealth well over $100 billion.

When Western governments announced on Friday their intention to freeze assets belonging to President Vladimir V. Putin of Russia as punishment for invading Ukraine, there was no indication they knew of significant holdings that could be tied to him.

In fact, very little is known about what Mr. Putin owns and where it could be. Despite years of speculation and rumor, the extent of his wealth remains maddeningly opaque, even as billions of dollars have sluiced through the accounts of his close friends and luxury properties have been connected to family members.

Officially, Mr. Putin earns about $140,000 a year and owns a small apartment, according to his public financial disclosures.

But that would not account for “Putin’s Palace,” a vast estate on the Black Sea estimated to have cost more than $1 billion, with a Byzantine ownership history that does not include the Russian president but has been linked to his government in various ways. Nor would the disclosures account for “Putin’s Yacht,” a $100 million luxury vessel long tied to him in speculative news reports. (The yacht, Graceful, was tracked leaving Germany for Russia just weeks before the invasion of Ukraine.)

There is also the $4.1 million apartment in Monaco, purchased through an offshore company by a woman reported to be Mr. Putin’s lover. And there is the expensive villa in the South of France linked to his ex-wife.

The problem for the United States and its allies is that none of these assets can be directly connected to the Russian president.

Until now, Western governments have focused their sanctions on people suspected of serving as Mr. Putin’s proxies, hoping it will increase pressure on him. And most of the new penalties, like those that followed the Russian annexation of Crimea in 2014, continue to be aimed at oligarchs close to Mr. Putin. These include Kirill Shamalov, his former son-in-law and a major shareholder in a Russian petrochemical firm; Boris Rotenberg, a construction magnate; and Gennady Timchenko, an investor said to be Russia’s sixth-richest person.

The sanctions would make it impossible for those targeted to access assets or conduct financial transactions in the United States, Britain and the European Union, where the penalties were announced this past week. They would essentially freeze in place money and property that could be traced to those on the list, putting cash and securities, or even the sale of real estate, out of reach.

But Russia’s elites, who have lived under Western sanctions for most of the last decade, have long favored complex mazes of corporate ownership to avoid scrutiny. Oftentimes, their wheeling and dealing only surfaces publicly with the leak of files from offshore law firms or secretive banks that cater to those wanting to hide their wealth.

Paul Massaro, a senior adviser at the U.S. Helsinki Commission who has been counseling members of Congress on Russia sanctions, said it was not always clear to American officials what assets would be affected.

“It means that the sanctions that we hit these people with are largely going to be glorified press releases, because without knowing what these assets are, we can’t freeze them,” he said.

Still, even if the United States has only a limited picture of Mr. Putin’s wealth, sanctions are worthwhile “just to freeze what we can, freeze what we know, and let people know that these people aren’t welcome in our system,” Mr. Massaro said.

One European diplomat emphasized the symbolic value of the effort, describing it as “a politically important signal.”

By being added to the U.S. Treasury Department’s “Specially Designated Nationals” list, Mr. Putin joins a small but notorious subgroup of heads of state, including Nicolás Maduro of Venezuela, Kim Jong-un of North Korea and Bashar al-Assad of Syria. Sergey V. Lavrov, Russia’s foreign minister, was also subject to the sanctions.

“We are united with our international allies and partners to ensure Russia pays a severe economic and diplomatic price for its further invasion of Ukraine,” Treasury Secretary Janet L. Yellen said in a statement on Friday.

Estimates of what Mr. Putin may secretly be worth vary widely. One of the most sensational claims came from Bill Browder, an American-born financier who was banned from Russia in 2005 after clashing with oligarchs there. He testified before Congress in 2017 that he believed Mr. Putin’s wealth could total $200 billion, an extraordinary sum that would have made him the richest man in the world at the time.

What is at the root of this invasion? Russia considers Ukraine within its natural sphere of influence, and it has grown unnerved at Ukraine’s closeness with the West and the prospect that the country might join NATO or the European Union. While Ukraine is part of neither, it receives financial and military aid from the United States and Europe.

Are these tensions just starting now? Antagonism between the two nations has been simmering since 2014, when the Russian military crossed into Ukrainian territory, after an uprising in Ukraine replaced their Russia-friendly president with a pro-Western government. Then, Russia annexed Crimea and inspired a separatist movement in the east. A cease-fire was negotiated in 2015, but fighting has continued.

How did this invasion unfold? After amassing a military presence near the Ukrainian border for months, on Feb. 21, President Vladimir V. Putin of Russia signed decrees recognizing two pro-Russian breakaway regions in eastern Ukraine. On Feb. 23, he declared the start of a “special military operation” in Ukraine. Several attacks on cities around the country have since unfolded.

What has Mr. Putin said about the attacks? Mr. Putin said he was acting after receiving a plea for assistance from the leaders of the Russian-backed separatist territories of Donetsk and Luhansk, citing the false accusation that Ukrainian forces had been carrying out ethnic cleansing there and arguing that the very idea of Ukrainian statehood was a fiction.

How has Ukraine responded? On Feb. 23, Ukraine declared a 30-day state of emergency as cyberattacks knocked out government institutions. Following the beginning of the attacks, Volodymyr Zelensky, Ukraine’s president, declared martial law. The foreign minister called the attacks “a full-scale invasion” and called on the world to “stop Putin.”

How has the rest of the world reacted? The United States, the European Union and others have condemned Russia’s aggression and begun issuing economic sanctions against Russia. Germany announced on Feb. 23 that it would halt certification of a gas pipeline linking it with Russia. China refused to call the attack an “invasion,” but did call for dialogue.

How could this affect the economy? Russia controls vast global resources — natural gas, oil, wheat, palladium and nickel in particular — so the conflict could have far-reaching consequences, prompting spikes in energy and food prices and spooking investors. Global banks are also bracing for the effects of sanctions.

Anders Aslund, an adjunct professor at Georgetown University and the author of the 2019 book “Russia’s Crony Capitalism,” pegged the Russian president’s wealth at about $125 billion. He argued that much of it could be hidden in a web of offshore havens held by Mr. Putin’s allies, friends and relatives.

On rare occasions, people near Mr. Putin’s inner circle have spoken publicly about his wealth. In 2010, Sergei Kolesnikov, who said he was a business associate of a Putin ally, wrote an open letter to Russia’s then president, Dmitri Medvedev, asserting that Mr. Putin was building an enormous estate on the Black Sea coast that would come to be known as Putin’s Palace. It had cost more than $1 billion gathered through “corruption, bribery and theft,” Mr. Kolesnikov wrote in his letter, which he sent after leaving Russia.

The huge project features a movie theater, a hookah lounge and a pole-dancing stage, according to a report and documentary released last year by the jailed opposition leader Aleksei A. Navalny and his associates. Several oligarchs close to Mr. Putin have been involved at various times, including Mr. Shamalov’s father. Last year, the billionaire Arkady Rotenberg, a childhood friend of the Russian president, stepped forward to claim that he owned the property and was developing it into a hotel and apartments.

The Kremlin insists that Mr. Putin is a man of simple tastes, regularly distributing images of him roughing it in the Siberian woods, and denies that he owns any palaces.

“Putin has no need for luxury,” the state television host Dmitri Kiselyov said on his show early last year, after Mr. Navalny’s video investigation into the estate.

Leaks of financial information have also offered tantalizing clues about Mr. Putin’s proximity to riches, even if he does not appear in the data himself. The Panama Papers, a trove of files from an offshore law firm that were exposed in 2016, revealed the secret wealth of many close to him, including Sergei Roldugin, a cellist and longtime friend who took in more than $8 million a year, according to documents submitted to a Swiss bank. (He had previously told The New York Times, “I don’t have millions.”)

Last year, a new leak of files from companies specializing in offshore tax shelters, called the Pandora Papers, showed that the woman said to be Mr. Putin’s lover had acquired the apartment in Monaco. It was one of a number of assets she had accumulated that were worth an estimated $100 million.

But ultimately, said Nate Sibley, a researcher at the Hudson Institute’s Kleptocracy Initiative, Mr. Putin does not need to own a vast fortune because he is an autocrat who “controls everything.”

“When people say he’s worth such and such, what does that mean?” he asked. “Are they really saying that he’s going to cash in and retire to St. Tropez?”

American Express has introduced a new, limited-time offer that could be beneficial to small business owners.The offer is only open until January 3, 2023,...
Read more