Home Business Plan Powell’s Books Survived Amazon. Can It Reinvent Itself After the Pandemic?
Business Plan

Powell’s Books Survived Amazon. Can It Reinvent Itself After the Pandemic? 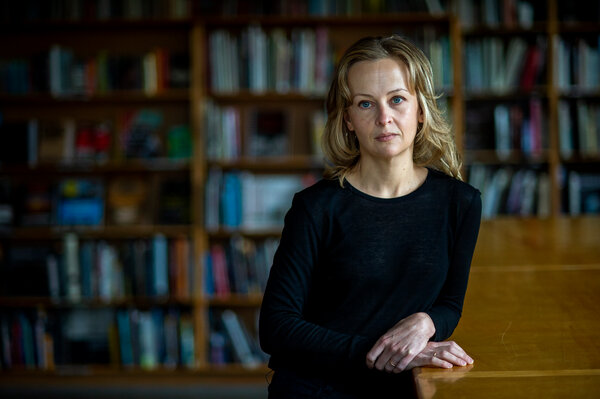 PORTLAND, Ore. — Over its half-century in the heart of Portland, Powell’s Books has survived an unending array of foundational threats — the oft-anticipated death of reading, the rise of Amazon, the supposedly irretrievable abandonment of the American downtown.

None of that provided preparation for the tumult of the past two years.

A quirky, old-school enterprise, Powell’s has retained its traditional aura in the digital era, while standing as a hero in a now-familiar tale of American urban rejuvenation. Its flagship store — a grand warren of books filling out a former car dealership — anchors a once dicey neighborhood whose warehouses have been traded in for glass-fronted condos and furniture boutiques.

But the latest plot twist has foreshadowed a potentially unhappy ending. Like the rest of Portland’s urban core — and like downtowns across the United States —Powell’s is contending with staggering uncertainty. How will brick-and-mortar stores fare in a time of continued fear over a deadly, airborne plague? What happens to city life when sidewalks are strewn with the rain-soaked belongings of people who can no longer afford rent?

“People don’t come downtown in the way that they used to prepandemic,” said Emily Powell, 42, owner and president of Powell’s Books, the business founded by her grandfather in 1971.

As a 6-year-old, she helped her father tend the cash register during the Christmas shopping crush. After college, she went to San Francisco, working at a wedding cake business and then in real estate before returning home to join the family firm. Now, she is consumed with how to update Powell’s in a city facing grave challenges.

“I don’t think, in 10 years, you’re going to say: ‘Good God, what happened to Portland? It never came back,’” Ms. Powell said. “But I don’t think it’s going to be the same. I think there’s going to have to be some creative adaptation that happens, and I’m not really sure what that looks like.”

I’m not really sure is a phrase now getting a vigorous workout — in Portland, and in communities around the world.

Consumption patterns have been refashioned by the pandemic, with online merchants capturing a greater share of spending. Experts debate the staying power of a tenuous economic recovery while the global supply chain has been stretched past the breaking point. Urban planners, employers and families tending to the complexities of life are reassessing the merits of commuting into offices.

In Portland, the uncertainty is especially poignant given the markers of enduring upheaval. Many downtown businesses remain boarded up, reminders of the chaos surrounding last year’s protests in one of America’s most segregated cities.

Rows of tents lining sidewalks have expanded to proportions worthy of Steinbeck, with duffel bags full of clothes stacked alongside camping stoves. Here is the product of decades of rising real estate prices, declining wages for many workers, and persistent cuts to social services in the face of joblessness, addiction and despair.

None of this attracts customers to downtown businesses.

“A lot of people were intimidated by the protests,” said James Louie, whose family has controlled Huber’s — a restaurant with elegant mahogany dining rooms — for 70 years. “They are also intimidated by the homeless people, even though they are, for the most part, harmless.”

That view is prevalent given Portland’s celebrated success in having reinvigorated its downtown once before, bucking the American trend toward suburban sprawl.

Beginning in the 1970s, local governments limited development to preserve green spaces beyond the city, while investing heavily in public transit and bicycle lanes.

The question is whether the pandemic and social ferment combine to undermine that trajectory, or instead catalyze the next revival by forcing city leaders to address the legacies of systemic racism and the dearth of affordable housing.

Among the people overseeing Powell’s, gnawing concerns about downtown coincide with an eagerness to seize an opportunity for reinvention.

When the shutdowns hit, the company turned its focus to online sales, which have traditionally accounted for only about one-fifth of its revenues. Powell’s is refashioning a clunky system for managing inventory while updating a website that looks like a memorial for the dial-up internet era.

“It’s a terrible website, and it hasn’t changed in about 20 years,” Ms. Powell said. “If we can’t solve our internet problems, we’re probably dead in the water.”

There are plans for whiskey tasting in the rare books room. A new cafe is being installed in a street-facing corner, standing in for the coffee shop that was shuttered during the lockdown.

“We’re replacing the nervous system and the brain of the organization at once,” said Powell’s chief executive, Patrick Bassett. “We’re starting to think about what we want to be postpandemic.”

But the rank-and-file are nursing grievances over how Powell’s handled the shutdown. The company laid off more than 90 percent of its work force. When operations resumed, it forced employees to reapply for their old jobs.

Ms. Powell maintains that her company was merely following the terms of its contract with the union, which specifies that laid-off workers surrender their seniority if they are recalled after 180 days.

“To not follow the language of the contract would be to break that contract,” Ms. Powell said.

The union mocks that characterization.

Carole Reichstein nodded bitterly. A 51-year-old single mother, she has worked at Powell’s for 25 years.

“A lot of the older workers, including myself, we don’t work there for the money,” Ms. Reichstein said. “We work there because we’re book nerds. We love the culture of Powell’s. We love helping customers with books.”

She and her colleagues understood the need to close stores in March 2020, resulting in the layoff of nearly 400 people, though they were taken aback by how they received the news — via a mass email.

The biggest shock came seven months later, when Ms. Reichstein was finally recalled. She was to be treated like a new employee, with her seniority wiped out, eliminating two of her six weeks of vacation.

She divined in her treatment an assault on worker solidarity. “They want to break the union,” she said.

Ms. Powell said she was winging it in a crisis. Initially, the company anticipated that every part of its business would need to be closed, but then quickly realized that it could continue operating the warehouse, she said.

Powell’s is centered on its original store on Burnside Avenue. At 70,000 square feet, the retail space is larger than the warehouse that feeds it. Inside its capacious rooms, the usual best sellers share display space with collections of ancient Greek novels, meditations on ultimate Frisbee and guides on how to overhaul a Volkswagen engine — used and new titles shelved side by side.

In a world increasingly governed by algorithms, with tastes shaped by corporate forces wielding data, Powell’s beckons as a shrine to happenstance.

“I’m not interested in being Amazon,” Ms. Powell said. “I believe in the power of walking down an aisle and discovering something you hadn’t anticipated.”

But that power was extinguished by the first wave of the pandemic. With Portlanders stuck at home and the city emptied of tourists, sales plunged by two-thirds through the summer and fall of 2020. The only channel for business was online.

So began a frantic effort to re-engineer Powell’s.

Before Covid-19, the company’s warehouse supplied its stores. The pandemic reversed the relationship, relegating the stores to storage space for inventory while making the warehouse the distribution center for online sales.

The warehouse floor was quickly jammed with carts full of books trucked in from stores, awaiting shipment to customers across the nation. Management struggled to bring back enough workers.

Between March and May 2020, online sales increased more than tenfold, according to the company, bolstering hopes that the business will return to its prepandemic level of sales next year.

But the surge of web business swamped the infrastructure at the warehouse, resulting in backlogs that took months to clear.

“We had to do it all on the fly,” said Laura Ziegler, manager of the retail distribution center. “We were pulling people in, trying to train them on how to train people.”

A hand-lettered sign taped to a concrete block wall attested to the spirit of the enterprise. “THE BOOKS MUST FLOW.”

The work on an updated website — still in its early stages — aims to inject personality into online shopping, adding book recommendations by real people. Powell’s is positioning itself as a local bookstore, run by people who cater to idiosyncratic tastes, now reachable online.

Still, even by its most optimistic projections, the company envisions online sales reaching no more than a third of its total business.

For better or worse, its fate is tied to Portland.

Caryn and Mike Nelson are counting on better. They are constructing the new coffee shop inside the Burnside store, expanding from their popular cafe and coffee roasting business, Guilder.

“We couldn’t turn down the opportunity at Powell’s,” Ms. Nelson said. “We see downtown as a very active part of our city, where community will still come together.”

Seven years after it was first proposed, the City of Winnipeg is looking at the idea of installing flashing lights in school zones again...
Read more