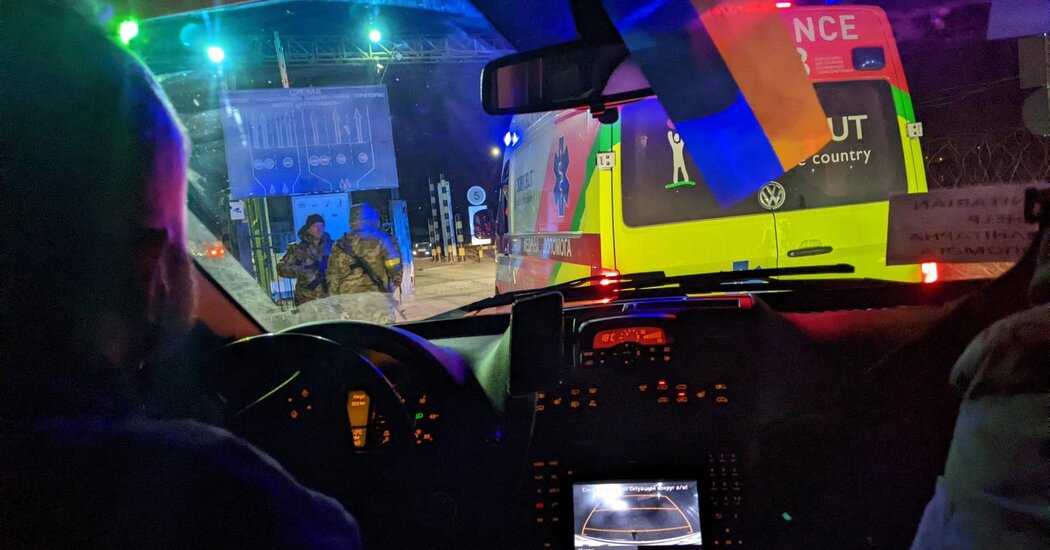 On the day Russia invaded Ukraine, Max and his wife drove from their home in Germany to Poland, and then crossed the border into Ukraine. With fear, they moved in the opposite direction of the long line of cars that intended to flee the country and that was snarling the roads for miles.

Traveling diagonally across the country on Feb. 24, they encountered unmistakable signs of possible violence to come, from dozens of Ukrainian military checkpoints, tanks patrolling the roads and sandbags piled high on the street.

Not venturing to the country would have broken the couple’s decade-old dream to have a family. Their Ukrainian surrogate mother was soon expected to give birth to their twin daughters.

“Just our children not being with us was something we couldn’t live with,” Max said.

Now when his daughters smile at him, the war fades away. They were born prematurely on March 4. But he knows that any day, war could be coming closer to his family. Air raid sirens sound day and night, and much of the twins’ first days in the world have been spent in the hospital’s underground shelter.

Max said he didn’t know if, when and how his new family of four would be able to return home to safety. He spoke on the condition that his last name not be used because many of his relatives did not know he and his wife had turned to surrogacy.

The Russian war in Ukraine has devastated cities and killed more than 500 Ukrainian civilians, with no end to the fighting in sight. The war has also engulfed the lives of foreign couples seeking to become parents. Nearly every day, Ukrainian surrogates give birth to the children of foreign couples, and these parents are struggling to evacuate their children or even meet them for the first time.

Commercial surrogacy is legal in Ukraine for heterosexual married couples who are medically unable to have children or who have unsuccessfully tried to become pregnant several times using in vitro fertilization. The country’s favorable laws — biological parents are listed on the baby’s birth certificate — and affordable prices, generally around $40,000, have attracted many aspiring parents.

Most parents visit Kyiv, the capital, once before their child’s birth, to visit agencies, potentially undergo in vitro fertilization and sign a surrogacy contract. Then, the process of a surrogate becoming pregnant may take multiple attempts over years.

At least a dozen companies offer surrogacy in Ukraine, and BioTexCom, one of the leading agencies in Kyiv, estimates that it arranges at least a thousand births each year. The agency had expected to have 100 babies born by month’s end. Many of these newborns will be born in Kyiv, where fighting has neared hospitals, far from the parents who wait anxiously from outside Ukraine’s borders to take them home.

Sam Everingham, the founder of Growing Families, a nonprofit based in Australia that supports people navigating surrogacy, said that he had heard from about 90 panicked couples with newborns or babies soon expected in Ukraine. Surrogacy agencies, many of them based in Kyiv, once courted parents with images of chubby-cheeked babies and sonograms. Now, the agencies’ social media pages are filled with grim updates of the staff members’ upended lives and their attempts to keep surrogates and newborns safe in bleak shelters.

Some agencies, like New Hope Surrogacy, have relocated pregnant surrogates to safer regions of the country, or outside of it altogether. However, if these women give birth in neighboring countries with different laws about paid surrogacy, the biological parents’ rights could be jeopardized.

The number of stranded babies is growing. Denis Herman, BioTexCom’s legal adviser, said the agency was caring for 30 newborns, most of them in Kyiv.

“We have a lot of babies born during this time,” Mr. Herman said. “We cannot stop this process. We have to find some ways to deal with it.”

BioTexCom believes that the babies are safer in the bomb shelters in Kyiv than being transferred in haste, Mr. Herman said.

Mr. Everingham has heard about “an ongoing flow” of parents traveling into Ukraine despite the risk.

Televised scenes of Russian strikes have terrified parents, including a new Canadian father who spoke on the condition of anonymity because his religion forbade surrogacy. His son was born in Kyiv shortly before the war began. He and his wife are in Turkey, trying to figure out a plan to extract their son, mired by deep stress and depression as they follow the news.

On the ground. Russian forces, battered by the local resistance, have stepped up their bombardment across Ukraine, targeting locations far from the front lines. Satellite imagery of a convoy north of Kyiv suggests that Russia is repositioning its forces for a renewed assault there.

A punishing measure. In a move to escalate the economic pain on Russia, President Biden called on Congress to suspend normal trade with the country, in a coordinated move with the Group of 7 and the E.U. The change that would raise tariffs for many Russian products.

Iran nuclear deal. A European Union official said that talks on reviving the 2015 deal had paused following the invasion. Russia, a signatory to the accord, has tried to use final approval of the deal as leverage to soften sanctions imposed because of the war.

Disinformation push. Russia falsely claimed that the Pentagon was financing biological weapons labs in Ukraine — a lie repeated by Chinese diplomats. The Biden administration called out both countries, saying the United States might provide cover for a potential biological or chemical weapons attack on Ukrainians by Russia.

“I don’t know what to do and where to go,” said the 41-year-old man, who lives in Toronto. “The joy of our child has taken over by the fear we might never get to hold him and lose him forever.”

The parents who have managed to extract their children through a combination of luck, connections and timing, say they feel immense responsibility to help evacuate their surrogates and others left behind in Ukraine.

Sasha Spektor, who lives in Chicago with his partner, Irma Nuñez, met his twin boys, Lenny and Moishe, for the first time on Tuesday. His sons had just traveled from Kyiv to Poland, a journey that took about 18 hours.

They were born two months prematurely in Kyiv at the beginning of war, on Feb. 25. The couple, their friends and supporters made hundreds of calls to locate resources in Kyiv, like baby formula and medical equipment, and to find the twins a way out of the war zone. The couple previously told their story of bringing their sons to safety to The Washington Post and NPR.

Eventually, they were able to secure an evacuation with the help of a volunteer Ukrainian ambulance crew and Project Dynamo, a nonprofit based in Tampa, Fla., conducting rescue missions out of Ukraine.

Meeting their sons was amazing, the new father said, adding that they were so gentle, and so tiny.

Their surrogate, Katya, crossed into Poland with the twins and another baby and its parents. Several days later, she returned to Ukraine, to reunite with her 6-year-old son in Lviv with the hopes of fleeing the country together.

“There are other people I feel responsible for,” Mr. Spektor said. “It was just as hard for me to part with her and just let her go back into Ukraine. She is one of us.”