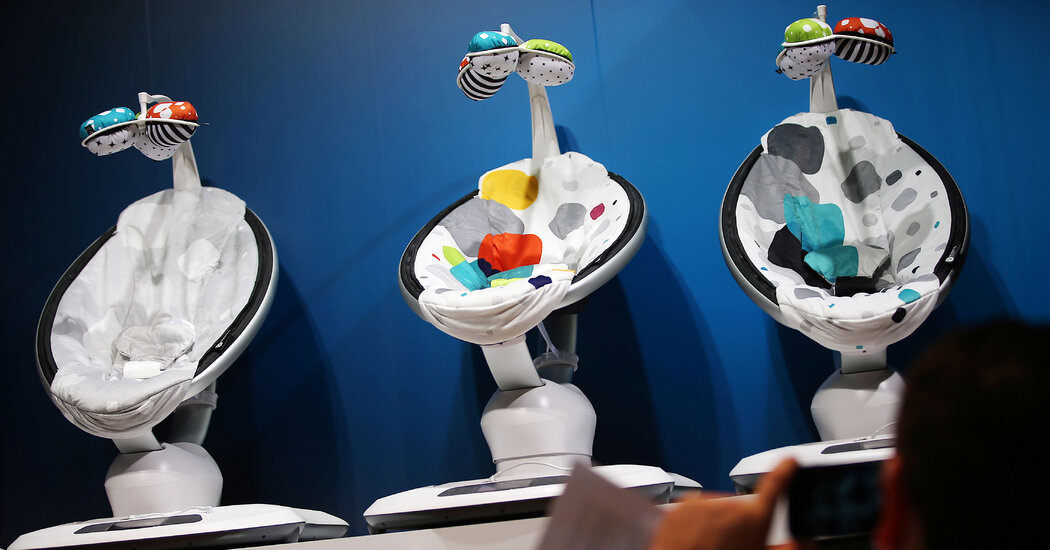 More than two million infant swings and rockers were recalled Monday for posing a danger of strangulation after a baby died and another was rescued from entanglement.

The restraint straps on the MamaRoo swings and RockaRoo rockers hang below the seat while not in use, creating the possibility that crawling infants could get stuck in them, the United States Consumer Product Safety Commission said.

The company behind both models, 4moms, “has received two reports of entanglement incidents involving infants who became caught in the strap under the unoccupied MamaRoo infant swing after they crawled under the seat, including a 10-month-old infant who died from asphyxiation, and a 10-month-old infant who suffered bruising to his neck before being rescued by a caregiver,” a release by the safety commission said.

Gary Waters, the chief executive of 4moms, said in an emailed statement that the company was “deeply saddened by the two incidents” and remained committed “to the highest quality and safety standards.”

Consumers with crawling infants were advised to stop using the recalled products and to place them where children could not access them. The company is offering consumers a free strap fastener that holds the straps when they aren’t in use to eliminate the safety concern, the company and the product safety commission said.

“We take consumer feedback very seriously and work closely with our product development and engineering teams to continuously improve our line of baby gear products to meet the needs of our parents and their families,” Amie Ley Stanton, a 4moms spokeswoman, said in an email.

Both lines of products were sold at BuyBuy Baby and Target stores, as well as online on Amazon and the 4moms website, the safety commission said. The rockers were sold between January 2010 and August 2022 for $160 to $250.

“We also have established relationships with external, independent and internationally accredited testing labs — specifically for the purpose of regularly testing our products throughout their life cycles,” Ms. Stanton said.

The most recent MamaRoo swing (Model 1046) was launched in July and is not included in the recall, she said. The harness and strap were redesigned for its release.

For more information, customers can contact 4moms at 877-870-7390 or at safetyandrecall@4moms.com. The company said it would contact all known purchasers directly.

Authorities and residents in Florida were keeping a cautious eye on Tropical Storm Ian as it rumbled ominously through the Caribbean on Sunday, likely...
Read more

A Winnipeg man and woman have been charged following three serious incidents involving robbery and kidnapping, according to police. On September 14 at 9:29 p.m....
Read more