Nordstrom, Louis Vuitton and Others Hit in California Burglaries 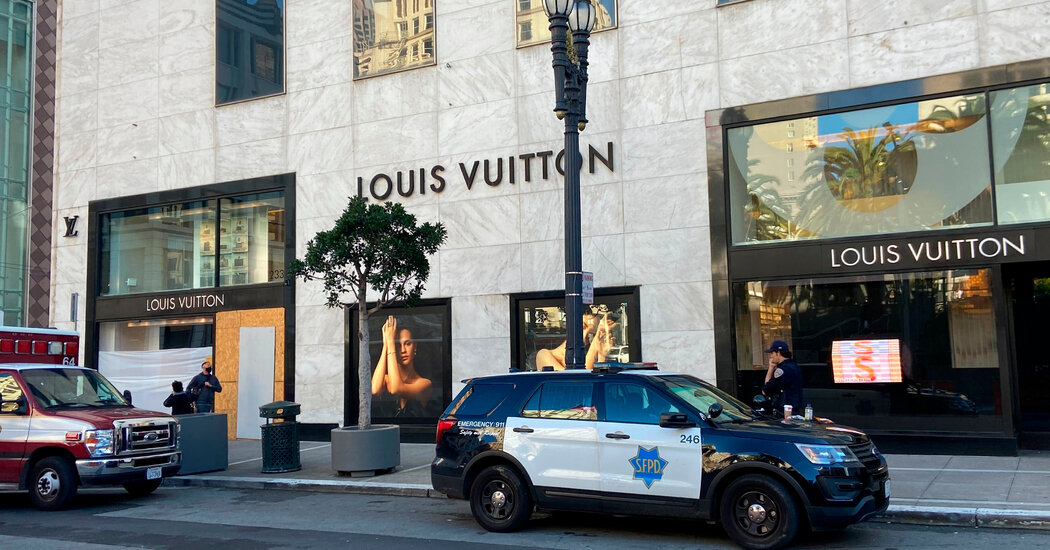 “Their plan was to overwhelm us,” Chief Bill Scott of the San Francisco police said after about a dozen stores were stolen from in one night.

Over the course of several hours on Friday night, at least 30 people burglarized several of San Francisco’s most upscale stores, prosecutors said, in what law enforcement officials called one of the most brazen thefts in recent memory.

The following day, hours after officials vowed to prosecute the thieves and prevent another large burglary, dozens of people ran into a Nordstrom store in the suburb of Walnut Creek, Calif., 25 miles to the east. They grabbed clothes, jackets and handbags, and escaped into a caravan of waiting vehicles, the police said.

Across eight days this month, near Chicago, around the Bay Area and in Beverly Hills and Los Angeles, a series of fast, high-profile burglaries have alarmed businesses, bystanders and some state and local officials, who have promised to crack down on the crimes.

“We need to make an example out of these folks,” Gov. Gavin Newsom of California said at a news conference on Monday. “They’re not just stealing people’s products and impacting their livelihoods. They’re stealing a sense of place and confidence, and that’s why you got to get serious about it.”

Whether any of the burglaries were connected was unclear. Store surveillance footage and cellphone videos that were shared online, showing people grabbing and running with merchandise, indicated that they varied widely. One Northern California theft appeared to involve three people, while the Walnut Creek burglary involved as many as 80, according to the police.

To the extent there were patterns to the burglaries, law enforcement officials said, each involved groups of at least three people, usually with getaway vehicles waiting nearby and apparently with little fear of being seen by store cameras or bystanders.

Data about how frequently these types of crimes occur is not readily available from two leading retail industry trade groups, and local law enforcement agencies have not shared their data publicly.

A spokesman for the San Francisco Police Department said that because the investigation was ongoing, he would not say what evidence, if any, the authorities had collected to connect the burglaries on Friday night.

“Their plan was to overwhelm us,” Chief Bill Scott of the San Francisco police said at a news conference the next morning. “We will do what we need to do to put an end to this madness.” On Monday, he told ABC7-TV that the burglaries were “organized to a degree.”

Mayor London Breed of San Francisco said the city would increase the police presence and restrict vehicle access in the Union Square shopping area. Chief Scott said that at least six men and two women were arrested in connection with several of the burglaries.

District Attorney Chesa Boudin, who faces a recall election next year and whose critics have accused him of being too lenient on crime, said on Wednesday that he had filed felony charges against the people who were arrested. “These are not petty thefts,” he said at a news conference. “This is felony conduct.”

Hours after San Francisco leaders promised a tough response on Saturday, the burglary took place at the Nordstrom in Walnut Creek. There, just before 9 p.m., about 80 people burst into the store, grabbed clothes, jackets and handbags, and escaped into more than two dozen cars that were waiting outside, the police said.

Bystander video posted on Twitter shows people in hooded sweatshirts and face masks running down the street, carrying bags and armloads of merchandise.

Three people were arrested, one of whom had a firearm, the Walnut Creek police said. Over the next two days in California, a jewelry store in Hayward, a Lululemon in San Jose, a Louis Vuitton in Beverly Hills and a Nordstrom in Los Angeles were also burglarized by groups of at least three people, according to the police and local news reports.

On Nov. 15, nine people with hammers smashed display cases and took thousands of dollars worth of jewelry from a store in Concord, Calif., the police there said.

On Nov. 17, three people stole merchandise from a jewelry store at a mall in Fairfield, Calif., about 27 miles north of Concord, the police there said. The police said they later arrested three people and recovered about $50,000 in stolen merchandise.

The same day in Oak Brook, Ill., near Chicago, 14 people grabbed about $120,000 worth of merchandise and escaped in three vehicles that were waiting nearby, the police said.

Several Nordstrom employees in Walnut Creek were treated for minor injuries, the company said in a statement.

Retail industry advocates and loss-prevention experts said several factors may be behind the recent burglaries, including the proliferation of online marketplaces where unverified sellers can quickly sell, or “fence,” stolen merchandise.

“If you shut down the fences, what are these folks going to do with all the merchandise they’re stealing?” said Lisa LaBruno, an executive at the Retail Industry Leaders Association, a trade association.

Richard Hollinger, a retired professor at the University of Florida in Gainesville who has researched retail thefts, said the accessibility of products in stores was another factor.

Retailers “want to make the merchandise as exposed as possible” he said, “but now it is more easy to grab.” Though these kinds of crimes happen year-round, they tend to get more attention during the holiday shopping season, he said.

Estimates vary widely for how much money retailers lose through “organized retail crime” — an industry term with a broad definition that includes smash-and-grab burglaries and thefts by employees.

At a conference in Florida last week hosted by the Coalition of Law Enforcement and Retail, a nonprofit that encourages collaboration between agencies and companies, experts put the figure at around $30 billion, according to Jacques Brittain, the editorial director for Loss Prevention Magazine.

While retail advocates acknowledged that “organized retail crime” included a variety of crimes, they distinguished it from shoplifting.

Barbara C. Staib, a spokeswoman for the National Association of Shoplifting Prevention, a nonprofit, said the distinction consisted of the number of people involved and their motivations.

Shoplifting is “an opportunistic crime,” usually committed by one person, she said. “It’s not about an organized group of people going into a store and pillaging.”

Mr. Brittain, of Loss Prevention Magazine, said people shoplift mainly for personal use — stealing a shirt, for instance, to wear or sell for quick cash. People involved in organized retail crimes, he said, have “made it a business.”

Police investigating a suicide bombing that killed more than 100 people at a Pakistan mosque said on Tuesday that several people had been arrested,...
Read more