No Soil. No Growing Seasons. Just Add Water and Technology. 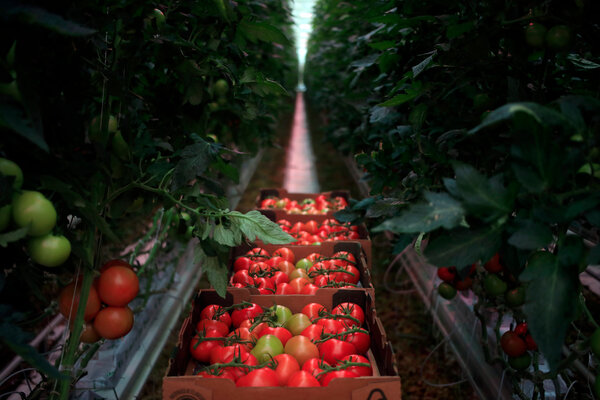 MOREHEAD, Ky. — In this pretty town on the edge of coal country, a high-tech greenhouse so large it could cover 50 football fields glows with the pinks and yellows of 30,600 LED and high-pressure sodium lights.

Inside, without a teaspoon of soil, nearly 3 million pounds of beefsteak tomatoes grow on 45-feet-high vines whose roots are bathed in nutrient-enhanced rainwater. Other vines hold thousands of small, juicy snacking tomatoes with enough tang to impress Martha Stewart, who is on the board of AppHarvest, a start-up that harvested its first crop here in January and plans to open 11 more indoor farms in Appalachia by 2025.

In a much more industrial setting near the Hackensack River in Kearny, N.J., trays filled with sweet baby butterhead lettuce and sorrel that tastes of lemon and green apple are stacked high in a windowless warehouse — what is known as a vertical farm. Bowery, the largest vertical-farming company in the United States, manipulates light, humidity, temperature and other conditions to grow produce, bankrolled by investors like Justin Timberlake, Natalie Portman, and the chefs José Andrés and Tom Colicchio.

“Once I tasted the arugula, I was sold,” said Mr. Colicchio, who for years rolled his eyes at people who claimed to grow delicious hydroponic produce. “It was so spicy and so vibrant, it just blew me away.”

The two operations are part of a new generation of hydroponic farms that create precise growing conditions using technological advances like machine-learning algorithms, data analytics and proprietary software systems to coax customized flavors and textures from fruits and vegetables. And they can do it almost anywhere.

These farms arrive at a pivotal moment, as swaths of the country wither in the heat and drought of climate change, abetted in part by certain forms of agriculture. The demand for locally grown food has never been stronger, and the pandemic has shown many people that the food supply chain isn’t as resilient as they thought.

But not everyone is on board. These huge farms grow produce in nutrient-rich water, not the healthy soil that many people believe is at the heart of both deliciousness and nutrition. They can consume vast amounts of electricity. Their most ardent opponents say the claims being made for hydroponics are misleading and even dangerous.

“At the moment, I would say the bad guys are winning,” said Dave Chapman, a Vermont farmer and the executive director of the Real Organic Project. “Hydroponic production is not growing because it produces healthier food. It’s growing because of the money. Anyone who frames this as food for the people or the environment is just lying.”

The technical term for hydroponic farming is controlled environmental agriculture, but people in the business refer to it as indoor farming. What used to be simply called farms are now referred to as land-based farms or open-field agriculture.

“We’ve perfected mother nature indoors through that perfect combination of science and technology married with farming,” said Daniel Malechuk, the chief executive of Kalera, a company that sells whole lettuces, with the roots intact, in plastic clamshells for about the same price as other prewashed lettuce.

In March, the company opened a 77,000-square-foot facility south of Atlanta that can produce more than 10 million heads of lettuce a year. Similar indoor farms are coming to Houston, Denver, Seattle, Honolulu and St. Paul, Minn.

The beauty of the process, Mr. Malechuk and other executives say, is that it isn’t limited by seasons. The cost and growing period for a crop can be predicted precisely and farms can be built wherever people need fresh produce.

“We can grow in the Antarctic,” he said. “We can be on an island. We can be on the moon or in the space station.”

That’s easy to picture: The farms are staffed by a new breed of young farmers who wear lab coats instead of overalls, and prefer computers to tractors.

Today, the more than 2,300 farms growing hydroponic crops in the United States make up only a sliver of the country’s $5.2 billion fruit and vegetable market. But investors enamored of smart agriculture are betting heavily on them.

In 2020, $929 million poured into U.S. indoor-farming ventures, more than double the investments in 2019, according to PitchBook data. Grocery chains and California’s biggest berry growers are partnering with vertical farms, too.

“There is no question we are reinventing farming, but what we are doing is reinventing the fresh-food supply chain,” said Irving Fain, the founder and chief executive of Bowery, which is based in Manhattan and has the indoor farm in New Jersey and one in Maryland, another under construction in Pennsylvania, and two research farms in New Jersey.

Mr. Fain said his farms are 100 times as productive as traditional ones and use 95 percent less water. Other companies claim they can grow as much food on a single acre as a traditional farm can grow on 390.

Vertical farms can be built next to urban centers, so lettuce, for example, doesn’t have to sit inside a truck for days as it makes its way from California to the East Coast, losing both quality and nutritional value. Vegetables can be bred for flavor rather than storage and yield.

The new systems are designed to produce a sanitary crop, grown without pesticides in hygienic buildings monitored by computers, so there is little risk of contamination from bacteria like E. coli, which forced large recalls of romaine lettuce in 2019 and 2020.

Still, many farmers and scientists remain unpersuaded. Mr. Chapman, of the Real Organic Project, served on a U.S. Department of Agriculture hydroponics task force five years ago, and is leading an effort to get the agency to stop allowing hydroponic farmers to certify their produce as organic. The very definition of organic farming, he and others say, rests on building healthy soil. In May, the Center for Food Safety, an environmental advocacy group, led an appeal of a federal court ruling that upheld the agency’s policy.

Although the nutritional profile of hydroponic produce continues to improve, no one yet knows what kind of long-term health impact fruits and vegetables grown without soil will have. No matter how many nutrients indoor farmers put into the water, critics insist that indoor farms can never match the taste and nutritional value, or provide the environmental advantages, that come from the marriage of sun, a healthy soil microbiome and plant biology found on well-run organic farms.

“What will the health outcomes be in two generations?” Mr. Chapman asked. “It’s a huge live experiment, and we are the rats.”

The divide between soil loyalists and ag-tech futurists is playing out on a much more intimate scale between two influential brothers: Dan and David Barber, who founded and own the organic farm Blue Hill and its restaurants in Greenwich Village and at Stone Barns in Pocantico Hills, N.Y.

In 2018, David Barber created an investment fund to support new food tech companies, including Bowery. But Dan Barber, a chef whose 2014 book “The Third Plate: Field Notes on the Future of Food” devotes an entire section to soil, believes that truly delicious food can come only from the earth.

“I am not buying any of it,” Dan Barber said of the hydroponic fever.

Trying to enhance water with nutrients to mimic what soil does is virtually impossible, he said, in part because no one really knows how the soil microbiome works.

“We know more about the stars and the sky than we do about soil,” he said. “We don’t know a lot about nutrition, actually.”

There is a cultural cost, too. For centuries, cuisines have been developed based on what the land and the plants demanded, he said. Regional Mexican diets built on corn and beans came about because farmers realized that beans fixed nitrogen in soil, and corn used it to grow strong.

“The tech-farming revolution is turning this equation on its head,” Mr. Barber said. It aids efficiency in the name of feeding more people, but divorces food from nature.

His brother, David, had long been skeptical of hydroponics, too. “Most of my career was about good soil leads to good agriculture and good systems and ultimately good flavor,” David Barber said.

But the environmental advantages of next-generation hydroponic food production can’t be ignored, he said. Nor can the improvements in taste over earlier hydroponic produce. “They are combining outdoor and indoor thinking, and science and history, to create something special,” he said. “There are not going to be many winners in this space, but it is going to be a part of our food system.”

Indoor farm companies view their competition as the large, industrial growers that produce fruits and vegetables bred to withstand processing and shipping — not smaller farmers using more natural growing techniques. The battle, they say, is against monoculture, not farmers who maintain healthy soil and feed their communities. Hydroponic farms can help develop new and more diverse plants, and reduce overall pesticide use.

“The only thing we are trying to do is get as good as farmers were 100 years ago,” said Mr. Malechuk, the hydroponic lettuce grower.

Indoor farming is a bet on the nation’s agriculture, said Jonathan Webb, the Kentucky-born founder and chief executive of AppHarvest.

“The American farmer is already obsolete,” he said, pointing out that the United States imports four billion pounds of tomatoes from Mexico every year. “Our hope is we can get farmers back on U.S. shelves.”

Even Mr. Colicchio, who led a campaign against genetically modified food and has long been a champion of small farmers, said the two styles of farming can coexist. “We’re going to need a lot of tools in the toolbox,” he said.

Ouita Michel, a chef in Kentucky, likes AppHarvest because the company is creating jobs and growing tomatoes she is happy to use in her restaurants.

But technology, she said, will never trump the magic of soil. “Nothing will ever replace my summer Kentucky tomatoes.”

What Cases Could Be Next for the Supreme Court

The company planning to buy Donald Trump’s new social media business has disclosed a federal grand jury investigation that it says could impede or...
Read more

RCMP say a man and his son who were riding an ATV in the woods “undoubtedly” saved the life of a senior who went...
Read more

OPP responded to three motorcycle collisions on Saturday in Elgin County. At 11:21 a.m., a motorcycle and an SUV collided at the intersection of Highway...
Read more