No injuries after incident involving truck and Ottawa police barricade 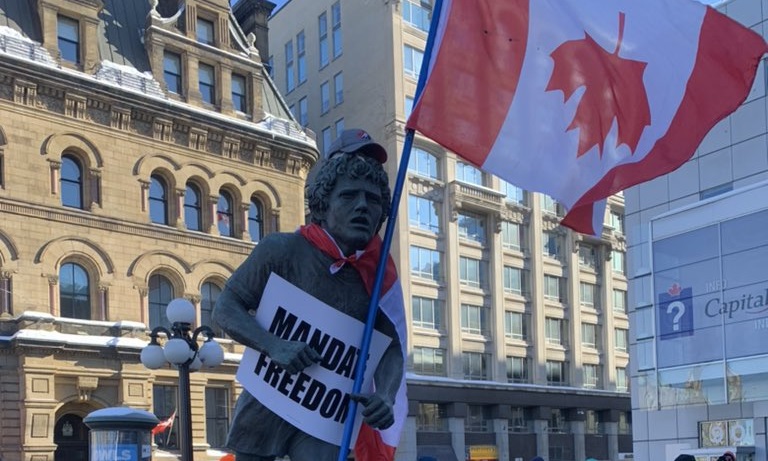 Ottawa police responded on Monday to an incident involving a truck and a police barrier near Parliament Hill, where members of a demonstration over the weekend continue to blockade roads.

“Police have responded to an incident involving a truck at a police barrier,” Ottawa Police spokesperson Const. Paramjit Singh said in an email.

“There were no injuries and the situation was de-escalated. Updates to follow.”

Police had described the matter as an “active incident” shortly before.

They said the incident took place on Wellington Street, which is the main street running east-west in front of Parliament Hill, and which has been the site of blockades and demonstrations.

For days, the sound of revving truck engines and blasting horns has disrupted the downtown core of the city, as police have said they are avoiding enforcing some local bylaws in order to avoid confrontations with the demonstrators.

“Police are aware that many demonstrators have announced their intention to stay in place. This will continue to cause major traffic, noise and safety issues in the downtown core. We urge all residents to avoid travel to the core,” Ottawa police said in a statement on Sunday.

“Police have avoided ticketing and towing vehicle so as not to instigate confrontations with demonstrators. Still, confrontations and the need for de-escalation has regularly been required.”

Instead, police redoubled calls for people to avoid the downtown core while offering no clarity for residents on when they can expect a return to normal as frustrations continue to mount.

Police are spending $800,000 per day managing the demonstration.

“I understand to a large extent why emergency services, police services both local and national, would not want to incite this crowd,” said Catherine McKenney, city councillor for the downtown Somerset Ward, in an interview with The Canadian Press.

“However, at some point, we need assurances that we’re not going to allow our city and our downtown to be seized and to push out others and make people frightened to live and move about in their own neighbourhoods.”

Mathieu Fleury, a city councillor who represents an area just east of Parliament Hill, tweeted that the people “intimidating our neighbours, blocking our streets, blaring noise & harassing our authorities & journalists have no place in our city. They must go.”

With files from The Canadian Press.