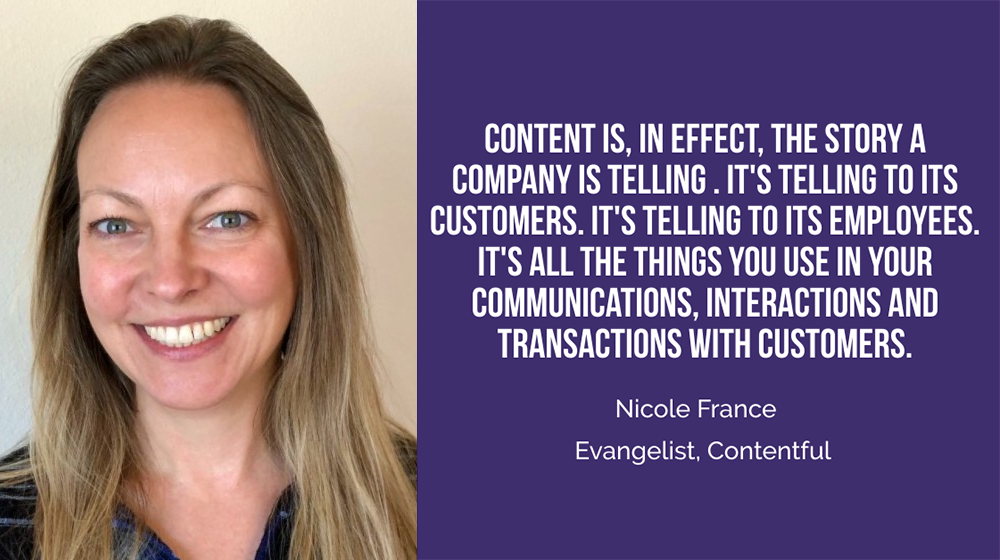 The term content creator has gained a lot of attention lately, as companies need to constantly churn out attractive content in order to grab and hold the attention of the folks they’re looking to do business with long enough to turn views into revenue.  But the traditional role content has played in the business model has changed significantly in the last couple of years, especially the last eighteen months with the pandemic.

During a recent episode of The CRM Playaz with my co-host Paul Greenberg, we spoke with two executives with Contentful, a leading content platform for digital-first businesses.  Dina Apostolou, Vice President of Product Marketing, and Nicole France, Evangelist, share with us how the role of content has evolved into a much more central role in the business, going beyond lead generation and SEO to helping to tell the complete story of the organization.

Below is an edited transcript of a portion of our conversation.  Click on the embedded SoundCloud player to hear the full conversation.

Dina Apostolou:  It’s been an explosive past couple years. Content is no longer just about the front end of a journey and the backend of a journey. There are so many intricacies there, especially as it relates to revenue generating types of activities and cross-sell, upsell… The analytics that it generates around it, but it kind of puts it into context.

Nicole France: I would argue that if you’re going to really zoom out and take a big picture look at it, content is in effect, the story that a company is telling. That it’s telling to its customers, that it’s telling to its employees even, and it’s all the various elements of that. It’s everything from the brand promise and advertising and the way it’s perceived. It’s the set of things that you’re selling, whether they’re tangible or not, how you describe them, how you position them. It’s all of the things that you use in your communications and interactions and transactions with customers.

And sometimes that’s expressed in specific assets. PDF document or a picture or a brochure or a billboard advertisement, whatever it might be. But it’s sometimes a little more nebulous than that as well. And so if we’re talking about content and to Sven’s question, how do you monetize it? I think the answer is going to be very subjective, because it’s not the same for every business. But if you can think about what it is in a big picture sense, that’s where you’re going to get to the best, most efficient answer for how to make it work for you.

It’s really fascinating when you start talking about content, because first of all, it’s not like the thing at the end of the line, that’s just the copywriters do that goes onto the website and isn’t necessarily an afterthought. But content really is an integral part of how companies communicate to their customers. What they are, what they do, what they’re selling, what matters to them, what they think matters to their customers, all this stuff really is content in some form or another.

So what becomes really interesting around this whole concept of headless, the idea that we’re disaggregating the content from where it goes and where it gets displayed has some really interesting implications for who’s designing it, who’s creating it, and how they think about creating it. Because by virtue, changing that process, we’re actually able to change some thinking about what goes into that whole content life cycle, not just where it ends up being displayed.

Brent Leary: All the digital transformation talk, has that changed the way that companies in general look at content and how it’s used?  And particularly not just the digital native or cloud companies that were born to think like that. But what about the meat and potato kind of companies that focus more on product than message and content, have you started seeing them change their approach and look at content in a more strategic way that central to the overall, not just gathering leads or the one just lead gen?

Dina Apostolou: There’s been this huge pivot towards digital. But even when you think about the companies that have naturally been built based on a physical footprint, they still have a digital aspect to it. And you hit on one of those, right? There’s the outbound stuff, but then you think about all the data capture. At that point of, let’s say, a sale. Or immersion and types of experiences that you might have there. Those are forms of content that are generating data. So regardless, content is a key ingredient that is so critical for a business. And it’s not a last mile piece of the execution, but it’s actually sits at the core ingredient of a digital strategy. And so we’re seeing more businesses and more customers of that mindset.

Nicole France: To the point about not just being about the digital natives. I think just about every business over the last 18 months figured out that this whole digital thing is not just a passing fad. And I think what’s interesting is it’s not even so much about are you operating as a more traditional company in all these digital channels, but I think what we’ve seen over recent months is a realization that it actually really does require a different way of thinking and a different way of working. And that’s as much about changing some of the operations as it is about making sure you’ve got the right tools to do it. So, think of companies like Moderna and CVS that, they’ve had a pretty amazing last year, year or two years with some crazy stuff going on. They’re as much pushed to change the way that they think about content and what it means to be digital-first, as Netflix or Spotify or anybody who’s been a digital native delivering things like streaming content.

And it’s really fascinating to watch because you begin to see that this whole concept of digital first, I think is really starting to be better understood. It’s not that everything is about having a commerce channel. That might be one part of a much more extensive strategy. And if you aren’t thinking about all of this stuff really holistically, even when you have retail stores, even when you’re doing things face-to-face and then person, digital still pervades in all of those areas too. So if you aren’t building a broad based understanding of what that means and how to support it efficiently, you’re going to kind of be crushed under your own weight because you’re going to be duplicating effort and you’re going to be paying way over the odds to make it happen. And it’s frankly, going to be painful and slow.

This is part of the One-on-One Interview series with thought leaders. The transcript has been edited for publication. If it’s an audio or video interview, click on the embedded player above, or subscribe via iTunes or via Stitcher.