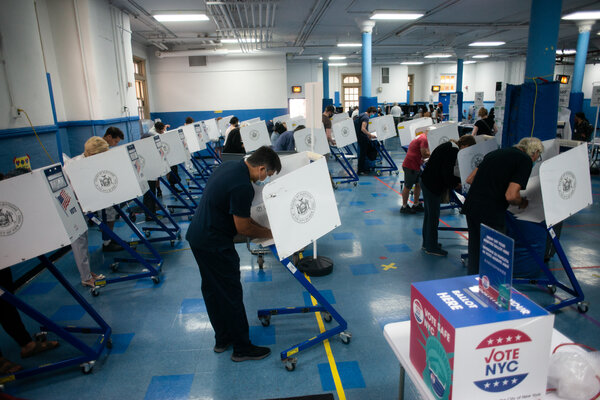 New York City’s Board of Elections will release a new tally of votes in the Democratic primary for mayor on Tuesday.

Let’s hope it goes better than it did last week when officials announced inaccurate figures and had to retract them.

The updated tally on Tuesday should include most of the roughly 125,000 Democratic absentee ballots that were not included in the first count. It should give us a better sense of who is likely to win the race, though final results are not expected until next week.

Mr. Adams needs to hold on to his lead, while Ms. Garcia is hoping to overtake him by winning more absentee votes in Manhattan and by appearing on more ballots as voters’ second or third choice. Maya Wiley, a former counsel to Mayor Bill de Blasio, was in third place and believes she still has a chance to win.

The city is using a new ranked-choice voting system that allows voters to rank up to five candidates in order of preference. Since no one won more than 50 percent of first-choice votes, the winner will be decided by a process of elimination: Lower-polling candidates are eliminated in rounds, with their votes distributed to whichever candidate those voters ranked next.

Officials did not say when to expect the results on Tuesday, but the Board of Elections announced in a cryptic post on Twitter on Tuesday morning that the new results should arrive during “brunch special” hours instead of “club hours” late at night. That prompted a playful debate on social media over when exactly it is appropriate to eat brunch in New York City.

Many New York City voters got their first glimpse at how ranked-choice voting can reshape an election last week, when the Board of Elections released a preliminary tally of ranked-choice election results.

Though Eric Adams, the Brooklyn borough president, led his nearest competitor by almost 10 percentage points after the first-round ballot, that lead shrank considerably after the ranked-choice results were tabulated.

The Board of Elections will release new results on Tuesday, which will include almost all absentee ballots and could tighten the race further, or even produce a winner — though full results are not expected for another week or more.

This year’s primary marked the first time that ranked-choice voting was used in a citywide election in New York. Instead of selecting just one candidate on their ballots, voters ranked up to five, in order of preference.

In the Democratic mayoral primary, no candidate got more than 50 percent of the vote. As a result, the Board of Elections eliminated the last-place finisher and redistributed first-choice votes for that candidate to voters’ second-choice picks.

The process continues, moving through voters’ third-, fourth- and fifth-choice picks, until there is a winner with a majority of votes. When all of a voter’s choices have been eliminated, their ballot is said to be exhausted.

Here’s more information on the ranked-choice ballot and how the rounds of counting will work.

Proponents of ranked-choice voting say that the system offers voters more of a say, particularly in cities like New York, where crowded Democratic primaries are often as important as the general election. They also say it is more cost-effective than holding runoff contests.

Some critics have argued that the system was overly complex. They have also said that elections officials could have done more to educate the public about the system and how it works, though few problems were reported at the polls.

Maya Wiley finished third in a preliminary tally of votes in the New York City mayor’s race last week, but she believes she still has a path to victory.

“It remains a deeply competitive race,” said Ms. Wiley, a former counsel to Mayor Bill de Blasio, as she stood in front of City Hall last week and called for every vote to be counted.

Ms. Wiley is hoping that a new tally of votes on Tuesday that includes most of the remaining absentee ballots will help her overtake her two leading rivals, Eric Adams, the Brooklyn borough president, and Kathryn Garcia, the city’s former sanitation commissioner.

Under the city’s new ranked-choice voting system, Ms. Wiley was eliminated in the ninth round after trailing Ms. Garcia by fewer than 350 votes.

Mathematically, it is still possible for her to prevail in the end, though she needs to win a significant chunk of the absentee votes in parts of the city where she did well on Primary Day. She polled strongly in neighborhoods known for younger progressive voters, including Williamsburg in Brooklyn, Long Island City in Queens and the East Village in Manhattan.

She must also be ranked second or third by many of the voters who preferred losing candidates like Andrew Yang and Scott Stringer.

But Ms. Garcia has a significant advantage in Manhattan, the borough with the most absentee votes, while Mr. Adams is strong across Brooklyn and the outer boroughs. In addition, Ms. Garcia struck a late alliance with Mr. Yang, the 2020 presidential candidate, and may be more likely to be ranked second on the ballots of his supporters.

Still, Ms. Wiley consolidated support among progressive leaders like Representative Alexandria Ocasio-Cortez during the final weeks of the race, and she did better than expected on Primary Day, receiving more first-choice votes than Ms. Garcia.

The likely makeup of the next City Council will become clearer on Tuesday when the Board of Elections releases new ranked-choice results that are expected to include a significant number of absentee ballots.

More than half the members of the City Council will vacate their seats at the end of the year, largely because of term limits preventing them from running for re-election. Most, though not all, of the incumbents who were seeking re-election cruised to an easy victory on Primary Day.

But the outcome of the Democratic primary races for most of the open seats remained uncertain. On Friday night, the Board of Elections released a preliminary ranked-choice tabulation in every Council primary. The results did not include absentee ballots, but they offer the clearest picture yet of the city’s incoming legislative body.

If the results from Friday night hold, women are expected to make up a majority of the City Council for the first time in the city’s history. At the end of ranked-choice tabulations, women were leading in 29 of the 51 Democratic primaries.

Still, the margins in some of those contests currently appears slim, and absentee ballots will be key in the ultimate outcome.

In District 32, where Democrats hope to flip the last Republican seat in Queens, Felicia Singh, a teacher backed by the Working Families Party, was up by just 405 votes over Michael Scala, a lawyer, in the final round. The winner in that race will face off against Joann Ariola, who won the Republican primary, in November.

In District 18 in the Bronx, Amanda Farias, a community organizer, was behind William Rivera, the district manager of a Bronx community board, by 119 first-choice votes. But after five rounds, Ms. Farias had picked up enough support from voters who originally selected other candidates that she finished ahead by 252 votes.