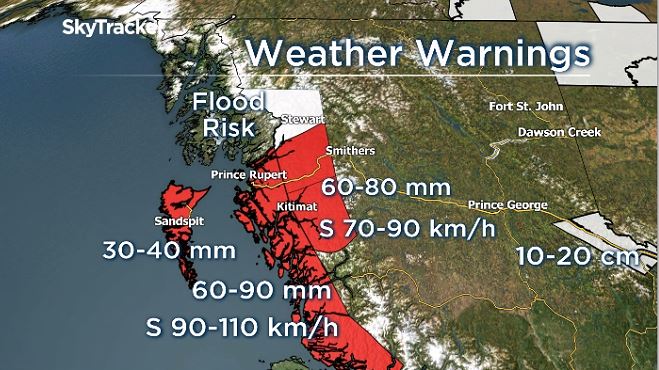 Yet another atmospheric river is bearing down on British Columbia, triggering new concerns about rain and possible flooding on both the North and South Coast of the province.

Environment Canada has issued a slew of winter storm, wind and rain warnings, along with special weather statements for Haida Gwaii and the North and Central Coasts as the system brings tropical moisture to the area.

By Sunday afternoon, it said 40 to 50 millimetres of rain had already fallen in the Kitimat area, with another 20 to 30 millimetres in the forecast. The heaviest rain in the north is expected to taper off overnight.

Inland parts of the North Coast, and Stewart, B.C., in particular, were facing a more wintery situation and up to 30 centimetres of snow had already fallen by late Sunday.

“The snow will melt as the rain continues and drainage systems could be blocked or overwhelmed,” Environment Canada warned.

“Localized or perhaps widespread flooding could result. Landslides could occur.”

The B.C. River Forecast Centre has maintained a flood watch for the North Coast region.

Powerful winds of up to 90 km/h with gusts of up to 110 km/h were forecast to hit the region by late Sunday evening, before easing off Monday morning.

Rainfall in the range of 15 to 20 millimetres was forecast for the South Coast on Monday, according to Global BC meteorologist Yvonne Schalle, with more significant moisture on the way by Wednesday and Thursday.

There was particular concern in Abbotsford, where crews supported by the Canadian military have been racing against the clock to repair damaged dikes, repair roads and drain floodwaters from a key agricultural area.

“We will see waves of rain into this week. The next big storm that we are watching is set to arrive on Thursday,” Schalle said.

“It’s still a few days out but a heads up that we could see between 50-60 millimetres of rain from Thursday into Friday.  Please be prepared for more rain and possible a significant amount this week.”

Abbotsford Mayor Henry Braun said Sunday afternoon that the city had made major progress battling the flood, including closing all major breaches in the dikes protecting the Sumas Prairie, and opening floodgates at the Barrowtown pump station.

Water from the flooding Nooksack River in Washington state had also stopped flowing north across the border into Abbotsford, he said, but that could change if the region is hit hard by more rain this week.

“If 100 millimetres come in 24 hours that’s a problem, a big problem, because the water is going to come back across the border,” Braun said.

Environment Canada has scheduled a technical briefing for the media on “significant weather” approaching the province for 12:30 p.m. Monday.

— with files from the Canadian Press