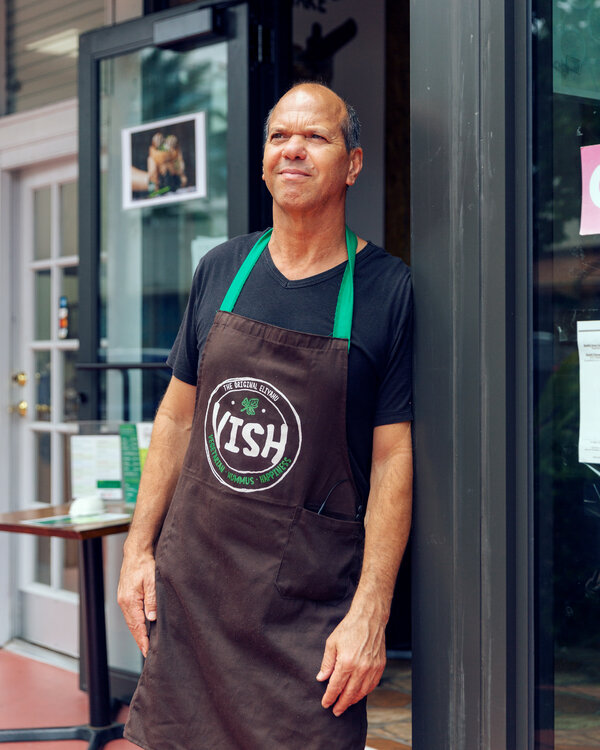 Food donations began pouring in soon after the apartment building fell in Surfside, Fla. Now restaurants are mobilizing a long-term effort to feed the community.

SURFSIDE, Fla. — Ten days before the coronavirus pandemic shuttered Florida restaurants last year, Shemi Bar-Natan had just begun a new venture after spending a decade in the Israeli army, opening a hummus bar less than a mile from the apartment building that collapsed last month.

The pandemic hit his urban kosher restaurant Vish hard, but it was nothing compared with the past two weeks since the June 24 collapse of Champlain Towers South, which has left more than 150 people missing and rocked tight-knit Surfside, which has just under 6,000 residents and a strong Jewish community.

In the days since, Mr. Bar-Natan, 58, has come into the restaurant every day to prepare fresh falafel, hummus and tahini, giving away more than 2,300 balls of falafel to rescuers, the survivors and the families of the missing.

“My heart is with them,” Mr. Bar-Natan said about the missing and the survivors of the building collapse. “I will continue to do the best that I can for the community, for the people, for Surfside’s community. I come here every day with a smile and say, ‘Today, I must give good service for the people.’”

While food trucks were the first on the scene, feeding emergency workers, chefs and restaurants from around Miami-Dade County have stepped up, driving through hours of traffic and rerouted streets to drop off boxed meals.

The chef David Shim provided dozens of takeout boxes filled with Korean steakhouse dinners from the Miami outpost of Cote, his Michelin-starred restaurant in New York City, to relatives of the missing and survivors on Tuesday.

“When you’re in that state of emergency, the last thing you’re thinking about is going to a restaurant,” Mr. Shim said. “I hope we can comfort them in any way possible.”

Many restaurants in Surfside have pledged to continue to help as hundreds of rescuers worked to recover the victims’ bodies.

Joshua Marcus, 47, who has owned Josh’s Deli in Surfside for about 11 years, has been providing hundreds of sandwiches to anyone affected by the collapse and the recovery effort. Through monetary donations and some deliveries of free meats and bread, Mr. Marcus has been able to feed anyone who asks his roasted turkey, cured pastrami and homemade corned beef without breaking the bank.

He said being there for his community, including opening his restaurant as a de facto center for rescuers, has given him meaning in the last two weeks. “But it’s so difficult to listen to it over and over and over again,” Mr. Marcus said. “I’m not a shrink, I don’t have that ability to compartmentalize someone else’s pain without feeling it.”

As the town begins to open up its streets, Miami-Dade’s culinary community has committed to continue feeding everyone involved in the arduous process of delivering remains to families for closure. Focusing on feeding people is how many chefs and volunteers have felt they’re beginning to heal from the tragedy.

“When the circus leaves town, we’re here,” said Sara Liss, 41, the author of “Miami Cooks,” a Surfside resident and a coordinator helping Food Rescue U.S. Miami, the nonprofit that has organized matching food donations with those who need free meals.

The group is one of a handful that have stepped in when it became overwhelming for activists to organize the random donations of food and supplies that piled up.

“It’s not like a hurricane that you know is coming,” said Ellen Bowen, the South Florida location director for Food Rescue U.S. “It’s kind of like an earthquake.”

Ms. Bowen and Ms. Liss wanted families to have hot meals that were not fast food, and provided dinners from different restaurants every week. They’ve received peri peri chicken and baked pasta; Brazilian comfort meals with chicken, rice and beans were delivered with a dulce de leche dessert and a note that said, “Please accept this small gesture as our way to say that our thoughts and prayers are with you.”

About a half-mile from the site of the collapse, volunteers have been working around the clock in the kitchen of Surf-n-Sides, a kosher beachside bistro at the town’s community center, which has been a gathering place for families and local authorities since the building collapse.

Eli Ginsburg, the owner of the bistro, and his friend Joe Zevuloni, 48, a local activist, repurposed the restaurant’s kosher kitchen to prepare more than 3,000 meals a day, with help from chefs and volunteers in orange vests. Through monetary donations, they have been able to pay for more than $10,000 worth of fresh supplies every day, churning out dishes with white sea bass, sesame chicken tenders, teriyaki salmon and rib-eye steak. Warm pastelitos are put into white paper bags and closed with a sticker that says, “Strong For Surfside.” Many police officers guarding the collapse site added the sticker to their uniforms.

The community center has become a hub of grief as families duck in and out, mourning inside and greeting the volunteers with hugs before they seek a meal. The tragedy is personal for Mr. Zevuloni and Mr. Ginsburg, too, who lost friends in the rubble.

At lunchtime, Mr. Zevuloni and several volunteers carry out boxes of food on golf carts lent by nearby hotels to deliver meals to rescuers on the site day after day. It’s unnerving, he said when he returned on Wednesday afternoon. The rescuers look worn down by the search and recovery. Moments of gratitude and grief that Mr. Zevuloni witnesses envelop him at the site, like when he saw that a homemade dessert for rescuers was delivered by someone who lost a family member, with a note that said it was their relative’s favorite.

“It’s heartbreaking,” he said. “But we’re going to be here until we’re not needed anymore.”