‘Miserable and Dangerous’: A Failed Chinese Promise in Serbia 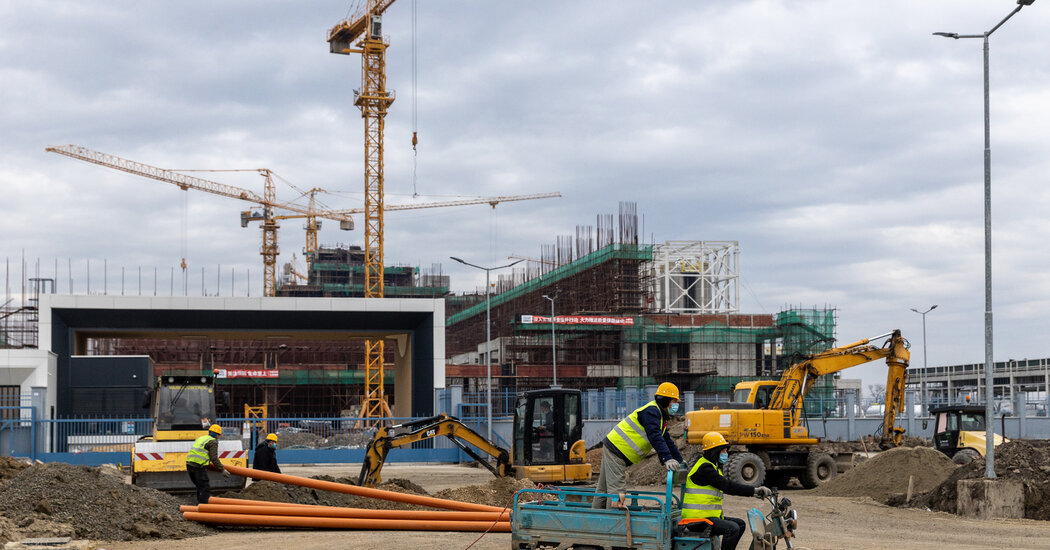 Poor conditions for Vietnamese workers building a $900 million tire factory underscore a chasm between the promise of investment from China and grim realities on the ground.

ZRENJANIN, Serbia — Seeking escape from grinding poverty in northern Vietnam, the 43-year-old farmer labored for years on construction sites in Kuwait and Uzbekistan before being offered a ticket to what he was told would be “the promised land” — Europe, and a job with a good salary.

“I wanted to go to the West to change my life,” the farmer, a father of three who asked that his name not be used to avoid retribution from his employer, recalled in an interview.

His life certainly changed: It got much worse.

The job turned out to be in Serbia, one of Europe’s poorest nations, with a Chinese company whose gigantic tire factory now under construction in the northern city of Zrenjanin has become a symbol of the chasm between the alluring promise of investment from China and the sometimes grim reality on the ground.

Touted as China’s biggest industrial investment in Europe, the $900 million Ling Long Tire factory is now a magnet of criticism for a Serbian government that opponents accuse of no-questions-asked subservience to China. Workers and activists say problems like human trafficking, prisonlike working conditions and environmental abuse are endemic.

About 400 Vietnamese work in Zrenjanin, along with hundreds more Chinese, who get higher salaries and better living conditions, according to the workers and local labor activists. The former farmer from Vietnam described his work conditions in Serbia as “miserable and dangerous,” and said he was housed in a decrepit shack crammed with other Vietnamese workers and bullied by Chinese supervisors.

Mr. Xi, who has looked to Serbia as China’s most dependable European friend at a time when other nations are souring on his country, praised the Balkan nation as a “good, honest friend and good partner.”

Mr. Vucic predicted that the tire factory, which plans to produce more than 130 million tires a year in Zrenjanin, and other planned ventures would make Serbia “the port for Chinese investments throughout the region.”

Serbia says Chinese investment has helped it achieve economic growth of over 7 percent last year, among the highest in Europe.

But the furor over working conditions has set back Serbia’s yearslong effort to join the European Union, whose view of China has become increasingly jaundiced. The European Parliament last month demanded an investigation into treatment of Vietnamese laborers in Zrenjanin and voiced alarm “over China’s increasing influence in Serbia and across the Western Balkans.”

It has also aggravated what has become Mr. Vucic’s biggest political headache: public anger over damage to the environment widely blamed on the government’s drive to juice the economy at all costs. Tens of thousands of people gathered late last year for weeks of street protests across Serbia against the development of a lithium mine project by the Anglo-Australian company Rio Tinto. The protests forced a rare retreat by the government, which on Jan. 20 canceled licenses for the project.

Chinese ventures in Serbia, which include a smoke-belching steel works near Belgrade, the capital, and a copper mine and smelter in the southern town of Bor, have helped stoke this anger. Despite gushing praise of Beijing in the pro-government Serbian media, they have made China synonymous in the minds of many Serbs with environmental degradation.

But unlike Rio Tinto, highly vulnerable because of its links to Australia, a country widely reviled in Serbia after the recent expulsion of the tennis star Novak Djokovic, Chinese companies have enjoyed unwavering support from Mr. Vucic as indispensable for the creation of jobs and economic growth.

But Marina Tepic, a leader of the main opposition party, said in an interview that the tire factory would “provide a few jobs to Serbs but kill many more with its pollution.”

Strong support from the leaders of both Serbia and China, she added, has put the project largely off limits for government regulators and allowed construction workers there — deprived for a time of their passports, housed in squalor and fearful of retribution — to be kept in “modern slavery.”

The government denies protecting the Chinese project from scrutiny, with the construction minister, Tomislav Momirovic, declaring on a recent visit to Zrenjanin that the Chinese factory was Serbia’s most closely monitored building site. Officials say that Vietnamese workers have all been given their passports back and are now free to leave if they want.

A few of the workers have fled. But for most of them, leaving would mean breaking their contracts and leaving family members in Vietnam in hock to labor brokers and loan sharks who paid their way to Serbia, the workers say.

A statement from Ling Long Tire cited in Serbian media said the company was “committed to full respect for and a humane and dignified approach to all employees.” Yet it stressed that none of the construction workers are employees, and work for subcontractors. Ling Long said it had asked the contractors to provide better accommodations. The tire company did not immediately respond to requests for comment at its head office in China.

The Serbian government, which granted 240 acres of farmland free of charge to Ling Long Tire for its factory and pledged $85 million in state subsidies, says the factory will eventually generate 1,200 jobs. It declared the venture a “project of national importance,” a classification that critics see as a move to shield the venture from environmental and other inspectors.

“They behave as if the Chinese factory were a military site,” said Ivan Zivkov, a member of a network of activist groups in Zrenjanin that has been pressing the authorities, mostly unsuccessfully, to release information about the factory and its likely impact on the environment.

Zoran Dedic, a retiree in Zrenjanin who attended a recent public meeting hosted by Mr. Zivkov, said he did not object to foreign investment. But he expressed alarm that so much information about the Chinese tire factory, particularly future levels of pollution, had not been made public and that Ling Long, while donating money to send local children to soccer camp, had not engaged in serious discussion with residents.

The Latest on China: Key Things to Know

A slowing economy. China’s economy slowed markedly in the final months of last year as government measures to limit real estate speculation hurt other sectors as well. The country’s latest figures add to expectations that the broader world economic outlook is beginning to dim.

Global supply chain impact. China’s trade surplus reached its highest level ever as the pandemic generated demand for Chinese goods, but rising Covid rates in the country are leading to more restrictions and raising fears of renewed disruption of supply chains.

The demographic crisis. The birthrate in China plummeted for a fifth straight year in 2021, moving the world’s most populous country closer to the moment when its population will begin to shrink, threatening the nation’s economic and political stability.

Olympics uncertainty. Chinese officials are racing to stamp out a series of Covid outbreaks weeks ahead of the Winter Olympics. Beijing’s first Omicron case prompted a lockdown and mass testing in one neighborhood, while the public has been barred from buying tickets to the Games.

“We know nothing about what is going on over there,” he said.

Marija Andjelkovic, the head of Astra, an independent group in Belgrade that monitors and lobbies against human trafficking, said she visited the construction site late last year and found Vietnamese workers sleeping in hovels without heat or clean water. “It was like a prison camp,” she said.

Labor contracts signed by Vietnamese workers with China Energy Engineering Group, a Ling Long subcontractor overseeing construction, commit each worker not to engage in trade union activities, and to “refrain from anything that would detract from his reputation or the reputation” of the Chinese company.

Even more restrictive are the terms set by recruitment agencies in Vietnam. One agency, Song Hy Gia Lai International, demanded that all workers going to Europe sign a document pledging never to go on strike or protest.

The document appears to have been copied and pasted from agreements originally drafted for laborers recruited in Vietnam for work in the Middle East: It warns that workers going to Serbia risk having their hands cut off if they steal.

Danilo Curkic, program director for A11, a Belgrade research group, said contracts signed by Vietnamese workers were “far away from anything that is legal under Serbian law” and left them in indentured servitude. “It is impossible that Serbian state authorities did not know what was happening,” he said.

“This is all part of the process of intimidation,” Mr. Curkic said.

Vietnamese workers who agreed to be interviewed by The Times through an interpreter said they had lived for months in squalid barracklike shelters previously used by a local farm to raise pigs and chickens.

The former farmer from northern Vietnam said conditions had improved somewhat in recent weeks. Many workers now live in a two-story concrete block surrounded by a metal fence and watched over by Serbian security guards who bar entry to outsiders.

One resident, a 40-year-old Vietnamese construction worker who requested anonymity, said he shared a tiny room with seven others and that their kitchen was crawling with rats. Salaries of about $900 per month, higher than what he could earn in Vietnam, were often paid late and slashed for days not worked because of sickness or inclement weather, he said.

He previously worked for different Chinese companies for 15 years in Korea, Kuwait, Malaysia and Taiwan, but said he had never endured conditions as bad as at the Ling Long Tire construction site in Serbia.