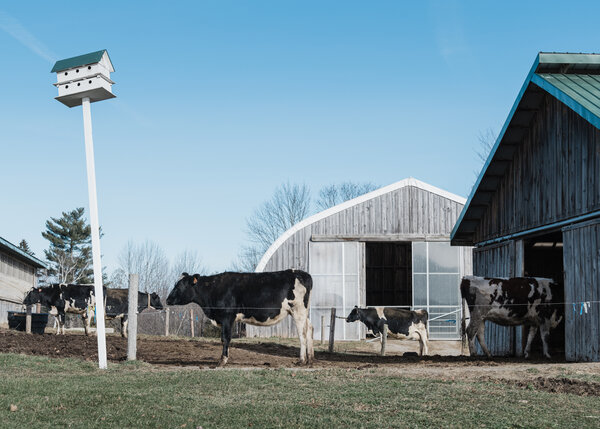 SEARSMONT, Maine — Glendon Mehuren II’s Faithful Venture Farm, 35 miles east of the state capital of Augusta, looks as tranquil as the farms pictured on cartons of organic milk. Cows ramble among weathered barns perched on a hill surrounded by small pastures and woodlots.

But things have been rough on the farm since August. That’s when Mr. Mehuren got a certified letter from Horizon Organic, which had been buying his milk for 16 years. It said it was terminating his contract in a year. Horizon delivered the same letter to 88 other organic dairy farms from Maine to New York.

In December, Horizon gave all of the affected farmers a reprieve, extending their contracts until February 2023 and paying a bit more for the milk. But the future for small dairy farmers in the Northeast still appears difficult.

For the past 20 years, organic milk offered a lifeline for small farms in the Northeast, allowing them to stay afloat while milking 100 cows or fewer. Now those farms are facing trouble because there is a lack of milk processors in the region and a glut of milk from huge organic dairies in Western states.

On a brisk December morning, Mr. Mehuren and one of his daughters were milking their Holsteins in the small milking parlor, in six shifts of eight cows. His father was outside in a tractor, hauling hay. Mr. Mehuren quickly rattled off the names of the many nearby dairy farms that had failed over the past few decades. The farms that survived expanded, hoping that volume would offset low milk prices, he said.

“Milk prices were very low in the early 2000s,” he said, and many small farmers felt the only options were to grow or die. “Then the organic deal kind of came along.”

That gave smaller farmers a third option. Mr. Mehuren earned organic certification for his farm and dairy herd and began selling milk to Horizon in 2005.

Since then, organic milk has grown to account for more than 5 percent of the nation’s milk market, and it is dominated by big businesses. Horizon Organic is owned by the French corporation Danone. Stonyfield Organic, the yogurt maker in New Hampshire that buys organic milk from New England farmers, is owned by Lactalis. And the farmer-owned cooperative Organic Valley, based in Wisconsin, now has more than a billion dollars in annual revenue.

“It used to be that you had your supply locally to your market,” Mr. Maltby said. “Now that paradigm has been turned on its head. The whole concept of regionality has disappeared.”

“The Northeast region provides a number of continuing challenges to pick up and transport milk to the processing facility we use in Western New York,” Mr. Adamo said in an emailed statement.

“While the reduced mileage is important, it is only one factor,” he added. Mr. Adamo cited a scarcity of truck drivers as another.

As Horizon withdraws, another challenge for organic dairy farmers in the Northeast is competition from larger farms.

“There’s been an enormous growth of organic dairy farms west of the Mississippi — Texas, Colorado,” said Richard Kersbergen, a professor at the University of Maine’s Cooperative Extension program who has been working with Maine dairy farmers for 37 years. “That’s created a situation where these mega-organic dairy farms are able to produce organic milk at a much cheaper cost than those farms in the Northeast.”

One company, Aurora Organic, has 27,000 dairy cows on four farms in Colorado and Texas, according to its website — the equivalent of about 500 small New England farms. Ms. Alexander called such operations “factory farms.”

Amanda Beal, the commissioner of the Maine Department of Agriculture, Conservation and Forestry, said she was concerned that larger organic farms in the West were not being held to the same standards as those in the Northeast. Two rules for organic certification set by the U.S. Department of Agriculture have long been bones of contention: those requiring that organic livestock have access to pasture, and the “origin of livestock” rule limiting the conversion of conventional cows to organic.

Ms. Beal said she would like to see the pasture rule more evenly enforced by organic certifiers nationwide. She said she also hoped that the U.S.D.A. would soon clarify the origin of livestock rule to eliminate loopholes used by larger dairies.

Ms. Beal asked Tom Vilsack, the secretary of agriculture, about this when she and her counterparts in other Northeast states met with him twice, via video, to discuss Horizon canceling the contracts.

Ms. Beal understands organic dairy farms because she grew up on one. That farm, now run by her brother, is among those being dropped by Horizon.

“I really want to emphasize that this isn’t about one farm or my family’s farm,” she said. “This is about 14 family farms in Maine and 89 family farms across the Northeast, and they are all, every single one of them, important.”

At Faithful Venture Farm, while cleaning out the parlor between milkings, Mr. Mehuren said that he understood the trends in the dairy industry but that he didn’t think they were an improvement.

“Having 10 farms milking 50 cows is hugely better for local economies than one 500-cow farm,” he said. “Consolidation seems to be the name of the game. The local hardware store closes and you have a Super Walmart.”

Mr. Mehuren and other Maine farmers are hoping they will be able to sell their milk to Organic Valley or Stonyfield Organic, the only other commercial buyers for organic milk in the state.

Horizon’s extending contracts until 2023 was little consolation to Judy Smith on More Acres Farm in East Dixfield. Ms. Smith, 68, and her husband, Leslie, 77, had been milking 30 cows and selling to Horizon. They had been hoping to transfer the farm to their 40-year-old son. But Horizon’s August letter ended that dream. The uncertainty seemed too great, and they sold the dairy herd.

“We were between a rock and a hard place,” Ms. Smith said. “We were heartbroken when those cows had to go, I’ll tell you what. They were more than just milk cows to us.”

COMMENTARY: Is the vinyl boom creating a new generation of audiophiles?

If you’re of a certain vintage, you probably spent a huge chunk of your disposable income on stereo gear. Back in the 1970s, ’80s,...
Read more

Kelowna’s north end neighbourhood is alive this weekend as hundreds of spectators from across the region gathered at Kelowna’s Knox Mountain. It’s the 63th annual...
Read more