Meet the Underdog of Senior Care 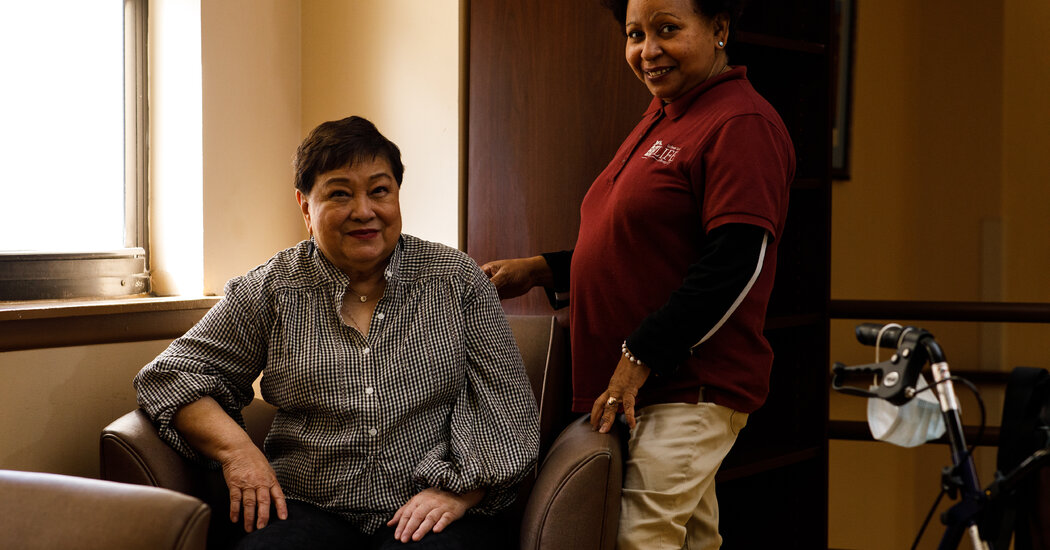 The Program of All-Inclusive Care for the Elderly, funded by Medicare and Medicaid, has quietly succeeded in enabling some older Americans to age in place.

Felicia Biteranta was struggling when, five years ago, she enrolled in a PACE program operated by Lutheran Senior Life in Jersey City, N.J.

Having suffered a stroke, she found it hard to eat without choking. She fell frequently; her diabetes was out of control; she had pulmonary disease and asthma. She might miss a medical appointment if she could not arrange or afford a taxi. Her family lived far away.

She was, in short, a candidate for a nursing home. But such a move is what PACE — the Program of All-Inclusive Care for the Elderly — was designed to prevent.

“The main goal is to let people age in place,” said Maria Iavarone, executive director of the PACE program that Ms. Biteranta participates in. “Nobody wants to give up their home. It’s where you’re most comfortable. It’s where you should stay.”

Ms. Biteranta now receives all of her health care through PACE, which monitors her, along with 120 other seniors, meticulously. PACE supplies much of her social life, too.

“Here, they schedule you for appointments,” said Ms. Biteranta, 74, a retired nurse. “They send someone to take you and bring you home.”

Carpal tunnel syndrome in her wrists and arms makes personal care and household chores difficult, so PACE sends an aide to her home 12 hours a week. “She cleans and does my laundry and the shopping,” Ms. Biteranta said. “She knows the food I like.”

PACE provided the portable oxygen unit that freed her from dependence on the larger oxygen tanks she uses at home. It arranged cataract surgery and regularly ferries her to a podiatrist, a cardiologist, an endocrinologist and other specialists. It delivers a host of medications at no charge, including asthma inhalers and diabetes-testing supplies. A staff social worker helped her apply for and move into an apartment in a subsidized building for seniors.

As a Medicaid beneficiary, she pays nothing for this care — no co-pays, deductibles or other out-of-pocket care expenses, and no caps on benefits. Should she require more home care hours or, eventually, a nursing home, PACE will cover those costs, too.

“It’s worry-free,” said Ms. Biteranta, who was preparing to have lunch at the PACE Center as she spoke. “They worry for me.”

Yet both the state and federal government also save money. PACE programs receive a set amount monthly from Medicare and Medicaid to provide nearly everything for people over 55 whose needs qualify them for a nursing home but who don’t want to enter one. This includes doctors’ visits, tests, procedures, physical, occupational and speech therapy, social workers, home care, transportation, medication, dentistry and hearing aids. Participants typically visit a PACE center like the one in Jersey City several times a week for meals and social activities as well as therapy and health monitoring.

That monthly payment is 15 percent lower, on average, than Medicaid would ordinarily pay to care for what are primarily low-income seniors, the National PACE Association said.

Research has shown that PACE programs reduce hospitalization, emergency room visits and nursing home stays. Participants survive longer than similar patients in less comprehensive programs. A study last year by the federal Department of Health and Human Services noted that the PACE program “stands out from our analysis as a consistently ‘high performer.’”

Why, then, do so few PACE programs exist — and enroll so few older Americans? Almost three decades after Medicare and Medicaid began funding PACE programs — today, there are 144, operating 272 centers in 30 states — the endeavor collectively serves fewer than 60,000 people, the National PACE Association reports.

The association estimates that 1.6 million Medicare beneficiaries might meet PACE eligibility requirements. As a list of current programs shows, however, 21 states have no PACE program, and 11 have just one.

Professionals in elder care tend to be fans. “Every geriatrician loves this model,” said Mark Lachs, co-chief of geriatrics and palliative medicine at Weill Cornell Medicine.

Specialists like Dr. Lachs have complained for years that traditional Medicare will cover costly surgery to repair broken hips but won’t pay to install inexpensive grab bars that might prevent falls. With PACE’s fixed payments, “there might be less money, but you spend it the way you want to, without getting on the phone for insurance company approval,” Dr. Lachs said.

At the ArchCare PACE program in New York City, for instance, “if a person’s air-conditioner breaks during a heat wave, we replace it,” said Walid Michelen, the program’s chief medical officer. “If there’s a snowstorm and they need food, we send it.”

With coordinated care and close observation, “you head off a urinary tract infection before it becomes sepsis,” said Jay Luxenberg, the former chief medical officer of the On Lok PACE program in San Francisco. “Or pneumonia when it can still be treated by antibiotics, before you desperately need a hospital.”

Yet growth has been slow. “We’ve had a lot of headwinds over the years,” said Shawn Bloom, the association’s chief executive.

For individuals, the enrollment process — which involves a state assessment to determine whether their medical conditions, cognitive status and functional limitations would warrant a nursing home — can take weeks. A family needing elder care immediately may be unable to wait.

Moreover, agreeing to receive all health care from PACE often means relinquishing one’s individual doctor, and some patients balk at that demand. Programs can evade that barrier by allowing PACE programs to work with community physicians.

But prospective patients may not know about PACE at all. “We’re trying to expand awareness, but we don’t have a ‘Got Milk?’ budget,” Mr. Bloom said.

Still, the pandemic has intensified older Americans’ desire for alternative forms of long-term care. “If people didn’t want to be in nursing homes before Covid, they really don’t want to be there now,” Dr. Lachs said. According to the association, Covid deaths among PACE participants have been about one-third those of nursing home residents.

So PACE’s growth is picking up, with 45 new programs expected to begin enrollment in the next two years, in part because of higher federal incentives. Moreover, for-profit companies are starting to establish or acquire PACE programs, although skeptics worry that for-profit status will lower quality.

Several bills introduced in Congress would remove barriers to growth; one would build partnerships with Veterans Affairs hospitals to make PACE more accessible to veterans.

Another intriguing possibility: Encouraging middle-class patients, for whom long-term care costs can also be ruinous, to enroll in PACE. Older adults who aren’t poor enough to qualify for Medicaid can already participate, but few do because their monthly premiums would be high — in many states, $4,000 to $5,000 a month.

But that is still less than they would pay for nursing homes or assisted living in many locations. Policy analysts are looking into ways to reduce costs and expand PACE eligibility for the middle class.

In Jersey City, Ms. Biteranta is doing well, although she misses concerts, Zumba classes, birthday parties and other events at the PACE center. Administrators curtailed such activities during the pandemic but hope to restore them as Covid rates decline.