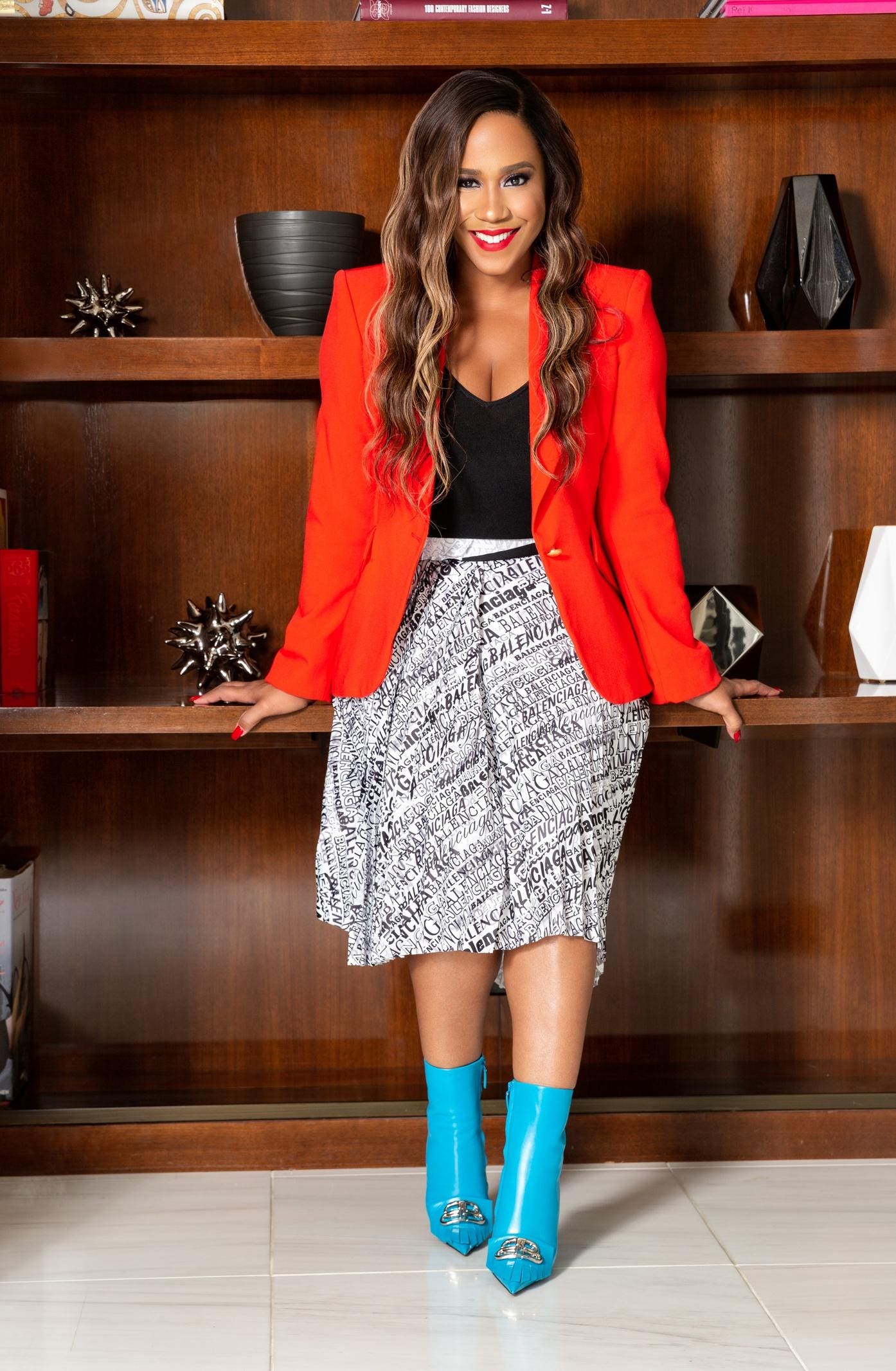 Many know Mahisha Dellinger, founder and CEO of CURLS, for dominating in the hair care industry. What they might not know is how she has been able to maintain her staying power for 20 years when most businesses fail within the first two. Dellinger doesn’t solely attribute her success to hard work as a leading businesswoman. She will tell you that building a millionaire’s mindset is key. Dellinger also often shares, “To whom much is given, much is required.” Her willingness to give back in the form of mentorship, sage advice, and business coaching are what make her wealthy – in addition to being a loving wife and mother.

Since launching in 2002, CURLS’ mission has been to provide natural hair care solutions for its customers. Over the years, Dellinger and her team have continued to align themselves with that mission resulting in CURLS products being sold at Target, Walmart, CVS, Amazon, and other major beauty retailers. So, how has Dellinger been able to make millions after starting her business with $30,000 in personal savings two decades ago and stay on the shelves?

She has a concrete business plan, continues to learn, and makes strategic business decisions.

There’s No Way Around Creating A Business Plan

When many entrepreneurs and business owners can become millionaires overnight selling products or services in the e-commerce space or on social media, it is essential not to skip the foundational step of creating a business plan.

When forming a business plan, Dellinger says,” Entrepreneurs should focus on ‘The Four P’s of Marketing: Product, Price, Placement, and Promotions. You also need to know your competition and exactly who you’re going against in the market. That has to be part of your marketing plan, as well.”

Dellinger says there should be a strong focus on pricing out of the Four P’s. “Pricing is where we can go wrong. I’ve seen entrepreneurs simply stick a sticker price on a product and then have to work backward because they didn’t think about all of the costs first.” Some of those costs are goods, services, and production.

“You have to add those up first. Then add in a margin for distributors and a margin for wholesalers. From that point, you can calculate your profit margin,” says Dellinger. “You can sell a million widgets, but say those million widgets cost you $9 to make, and you sell them for $10. You have to ask yourself at the end of the day, ‘What am I doing?’”

From there, you can come up with a growth plan. “Where do you see your product in two, five, and ten years from now? Document that process, make updates, and review what you are doing,” says Dellinger. After seeing your plan written down, you will begin to see the bigger picture. From there, you can start to focus on establishing healthy financial business practices.

A resource Dellinger likes to share with those getting started is SCORE, the nation’s largest network of volunteer, expert business mentors.

Millions Come With The Right Mindset and Discipline

While it is incredible to have a great idea, product, or service, mindset and discipline are foundational when starting a business.

“Your mindset as an entrepreneur or solopreneur has to be one that is tough, resilient and bounces back. You have to understand what it’s going to take to get from today to tomorrow, meaning from ideation to success,” says Dellinger.

For Dellinger, building a mindset that would (and has) attracted millions was fueled by her determination to change the trajectory of her life. “I’ve always been driven to have more than where I came from and a strong desire to shift the legacy that I was supposed to walk into. According to statistics, I was supposed to continue the generational cycle of poverty.”

Being disciplined is also critical as you build the mindset that will help you earn millions in business.

“A lot of people want the success but don’t know what hustle and discipline come with that,” says Dellinger. Yes, that means early mornings and late nights. It also means being willing to make sound decisions about how and who you are spending your time with, as well as your money. “You cannot align yourself with someone who was not going to help further your path.”

With the experience of launching Curls a year before meeting the love of her life she has been married to for 19 years, Dellinger says that your relationships can either make or break what you are establishing. “If I didn’t have the husband I have, I wouldn’t have done what I did. I have four kids. I had two of them back-to-back and then another child after amid the launch of Curls. I couldn’t have done it without a supportive, dedicated spouse. So, choose wisely who you connect your caboose to,” says Dellinger.

Delayed Gratification Pays Off, Too

Entrepreneurship doesn’t always result in perceived instant gratification as it may appear online.

“We saw Supa Cent make a million dollars in 30 minutes online. That’s not the ‘normal’ path. Don’t expect that. Your path of success could be seven years to success. So, as you’re climbing, fighting, and grappling to get to where you need to be, remember that it only takes that next yes after being told no a hundred times to get you to where you need to be. That was my case. Your mindset has to be one of, ‘By any means necessary’” says Dellinger. Tell yourself, “‘I’m going to make it happen, and I believe in my product, my service, my brand, my company.”

Emotional Intelligence Is Essential For Entrepreneurs

In addition to encouraging yourself with affirmations, building your emotional intelligence is critical because entrepreneurship can be stressful at times, especially when you are in retail.

“When you have products on the shelves, you have to sell at a certain pace daily, weekly, monthly, and quarterly. Your shelf space can go to another seller if you don’t sell. Or, if you lose shelf space and your units are returned, they’re will be returned at the price at which the retailer bought it out, multiplied by all those stores by all those units. And you get that bill. That is a lot of pressure,” says Dellinger speaking from personal experience.

“I’ve had some failures. I’ve had the experience where retailers would accept everything I would pitch because of my track record. I began to skip steps instead of my normal way of doing things. Traditionally, I would sell online first and gain the demand there. Then my products would be available in retail,” says Dellinger. “ I did that twice with two collections, which I shouldn’t have done, and had a huge return because they didn’t sell as fast they should have. Or, as they usually did when I usually launched to the tune of five to seven million dollars.”

During that time, Dellinger says that’s when she realized that she had to separate that failure from herself personally and the business. “What we do as entrepreneurs is attach business failures to our self-worth. In doing so, we lose sight of ourselves and our ideas of what it means to be successful.”

When those moments don’t break you, they help you build character. “Failure is not final. You’ll become a self-taught, self-motivating psychologist when you become an entrepreneur!” says Dellinger.

“I’ve learned to be a giver,” says Dellinger.

In 2019, she founded Black Women Making Millions Academy (formerly Black Girls Making Millions) to help women take their businesses to the next level. Now, with the support and partnership of Beauty Beyond Imagination (BBI), Dellinger is on the mission to help 25,000 Black women entrepreneurs get the education and resources they need to generate revenue in their business.

“Every weekend, we have MBA-style courses that women can register and enroll ib for free that are taught by business leaders. When you add the value of our resources, it is equivalent to $450 million for a year of programming,” says Dellinger.

As a businesswoman, Dellinger’s guiding principles set her apart.

“In life and business, I have to keep the main thing, the main thing. My goal has always been God first, family second, and business third. I know that if I keep things in perspective, and I keep my focus on what’s important, then I will align my life the way it should be,” says Dellinger.