Lower Manhattan Rebounded After 9/11, but the Pandemic Erased the Gains 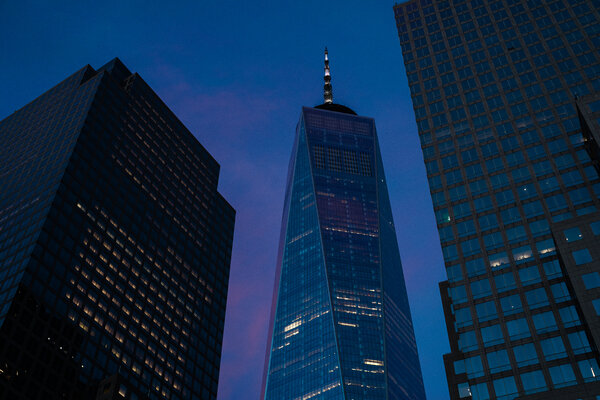 The Amish Market opened in 1999 in the shadow of the World Trade Center, one of the few grocery stores and delis for residents and workers in the southernmost tip of Manhattan. Two years later, the 110-story twin towers at the complex collapsed in the Sept. 11 attacks, showering the store in fiery debris and ash.

Shuttered after the attacks, the market reopened roughly five years later in a new location a few blocks away. It joined a triumphant comeback as Lower Manhattan was reborn into one of the country’s largest business districts, a vibrant residential neighborhood and, with the addition of the National September 11 Memorial and Museum, a tourist destination.

The Amish Market boomed, too, its staff doubling to 200 employees and weekly sales surging to more than $160,000.

But all that growth evaporated in a matter of days in a far different crisis that has wiped out many of Lower Manhattan’s gains since 2001.

When the coronavirus swept into New York in March 2020, the neighborhood abruptly emptied out, and revenue at the Amish Market plummeted in just one week, to $24,000 — not enough to pay rent, payroll and overhead. The store limped along until it permanently closed last September.

More than 350 retailers in Lower Manhattan have shut down over the past 18 months. New malls built after the terror attacks have had few shoppers, and landlords have sued retailers for not paying rent. Seven hotels have closed permanently, and others have yet to reopen.

Private-sector jobs have shrunk to 221,000, a smaller work force than in the months before 2001. Through the first seven months of 2021, daily ridership in the busiest subway stations in downtown reached just 6.3 million passengers, an 82 percent decrease from the same period in 2019, according to an analysis by The New York Times of subway ridership data.

More than 21 percent of Lower Manhattan’s office space is available for rent, a record high that is more than double the vacancy rate before the pandemic, according to Newmark, a real estate services company.

“When the terror attacks happened, it was just a matter of how long it would take to rebuild,” said Mike Jording, the former general manager of the Amish Market. “This is a different enemy — it’s more prolonged and worse. It’s a slow death.”

The gloom that has pervaded the downtown area for much of the past year — intensified by the rise of the Delta variant, which has hobbled the city’s recovery — evokes the days when the ruins of the towers still smoldered and some people predicted that Lower Manhattan would never recover.

No one would ever want to work or live in a high-rise building again, critics said. Within months of Sept. 11, 2001, about 4,500 of the neighborhood’s residents moved out.

But the outflow soon turned into a wave of newcomers, lured by federal financial incentives to live downtown. By 2005, the population of Lower Manhattan had grown to more than 43,000, an increase of 25 percent since 2000.

Most new arrivals were young college graduates, many of them employees at the large financial institutions that stayed downtown after the attack. They filled apartments in buildings converted from offices and patronized a growing collection of bars and restaurants in the square-mile district at the bottom of Manhattan.

Over the next two decades, Lower Manhattan was not only restored but reinvented, with at least $20 billion in public and private investments helping to transform it into a flourishing neighborhood. The recovery became an emblem of the city’s resilience.

New buildings rose, including the symbolic centerpiece, One World Trade Center, next to where the towers once stood. At 1,776 feet tall, it is the tallest building in the Western Hemisphere. Three other towers have been built on the site, as well as a memorial of cascading waterfalls and a $4 billion transportation hub linking new shopping and dining destinations beneath an architectural landmark known as the Oculus.

“Twenty years is a very long time and downtown should remember everything that happened 20 years ago,” said Peter Poulakakos, who owns several restaurants and other businesses in Lower Manhattan. “At the same time they should recognize how far they have come in the last 20 years.”

By the end of 2019, more than 253,000 people worked in private-sector jobs, surpassing the number just before the attack, according to the Alliance for Downtown New York, a business-improvement group. More than 900 companies had relocated to Lower Manhattan since 2005, including some of the city’s largest and most influential companies like Condé Nast, Morgan Stanley and Spotify.

“We love it down there,” said Tyler Morse, chief executive of MCR Hotels, whose offices are on the 86th floor of One World Trade Center. “Downtown has terrific physical attributes and great public transportation.”

Tourists flocked to the area at a level not seen before 2001, drawing 14 million visitors per year and fueling a hotel-construction boom.

But the pandemic has drained a lot of life out of Lower Manhattan.

Manveen Singh said she had no choice but to shut Tandoor Palace, her 27-year-old Indian restaurant on Fulton Street, after the pandemic took away the downtown office workers she had depended on. After the initial citywide lockdown she tried reopening, but, she said, “There was not a soul in Lower Manhattan.”

Companies continue to shed their downtown office spaces and seek tenants to take over their leases. JPMorgan Chase is trying to unload 700,000 square feet of office space on Water Street. And Advance Magazine Publishers, the media company that owns Condé Nast, withheld nearly $10 million in rent during a dispute with its landlord at One World Trade Center.

Advance started paying the rent arrears over this summer in a resolution with the landlord, the Durst Organization, which agreed to help Advance find another tenant to take over 200,000 square feet of office space it no longer wants, the companies said.

“One World Trade Center is our home and we are proud to contribute to its legacy,” said Roger Lynch, the chief executive of Condé Nast.

Eight years ago, Barker, an advertising company, moved to 30 Broad Street, an Art Deco skyscraper that was one of the world’s tallest buildings when it opened in 1932. But none of its employees have stepped foot in the company’s two-floor penthouse in 18 months.

Yet the firm’s founder, John Barker, said he has continued to pay office rent — more than $1 million since March 2020 — as a symbol of his commitment to the neighborhood. He wants to use the offices again but does not know when that might be possible.

“This is where New York began and the mercantile hub that created a nation,” said Mr. Barker, who in 2017 moved a short walking distance from the office. “We believe in the future of Lower Manhattan unequivocally.”

Despite the tremendous challenges facing Lower Manhattan, including the rise of remote work, Carl Weisbrod, a former chairman of the New York City Planning Commission, says the area is well positioned to rebound.

Mr. Weisbrod, the founding president of the Alliance for Downtown New York, noted that efforts that started before 2001 to attract people to the neighborhood should help lift the local economy while companies postpone return-to-office plans and tourists stay away.

“We have to be careful jumping to conclusions about how much this latest crisis,” Mr. Weisbrod said, “is going to change human life and the city’s life. What we have seen throughout history is the lure of cities, the lure of density and the lure for human talent to exchange ideas in a central place.”

On the streets of Lower Manhattan, workers expressed a mix of resignation and optimism.

On a recent hot Wednesday afternoon, Irma Gibb sat on a concrete bench near the 9/11 Memorial’s south pool, missing working from her home in St. Albans, Queens, that had served as her office since March 2020. Ms. Gibb, who works in human resources for the city’s Department of Homeless Services, had just begun to come on alternating weeks into the office at 4 World Trade Center. She said there were just three people in the office, which used to have more than 250.

“It has not bounced back,” she said of the neighborhood, citing shortened hours for restaurants and “all the businesses that closed.” She especially misses the Century 21 discount department store where she used to shop before the chain filed for bankruptcy in September 2020.

Inside the shopping mall under the Oculus, foot traffic was light as indie rock played over the speakers. Brik + Clik, which opened in December, beckoned shoppers with meticulously arranged shelves of artisanal goods — from vegan cheese puffs to a detoxifying charcoal face wash.

The store’s co-founder, Hemant Chavan, said activity at the Oculus had risen this spring with the city’s reopening, the Tribeca Festival in June, more PATH and subway riders coming through, and a return of some tourists.

Mr. Poulakakos closed all five New York locations of Financier, a pastry shop, including two downtown. He and his partner also shut Pier A Harbor House, a restaurant near Battery Park.

But Mr. Poulakakos is already preparing to replace a Financier on Stone Street in Lower Manhattan with a cafe. Stone Street, paved with cobblestones and a destination for outdoor dining long before the pandemic made that fashionable, is showing signs of recovering its former vigor, he said.

“The idea of everything getting back to normal at the snap of your fingers is not going to happen,” he said.

During a recent visit to Lower Manhattan, Mr. Jording, the former manager at the Amish Market, noticed more people shopping, dining and walking around. But nothing like before the pandemic.

“The streets used to be packed, bumper to bumper,” he said. “If we were to open, there would not be enough business.”

The Chinese spy balloon might be down, but the diplomatic temperature continued to rise Sunday as officials in Beijing blasted the U.S. decision to...
Read more