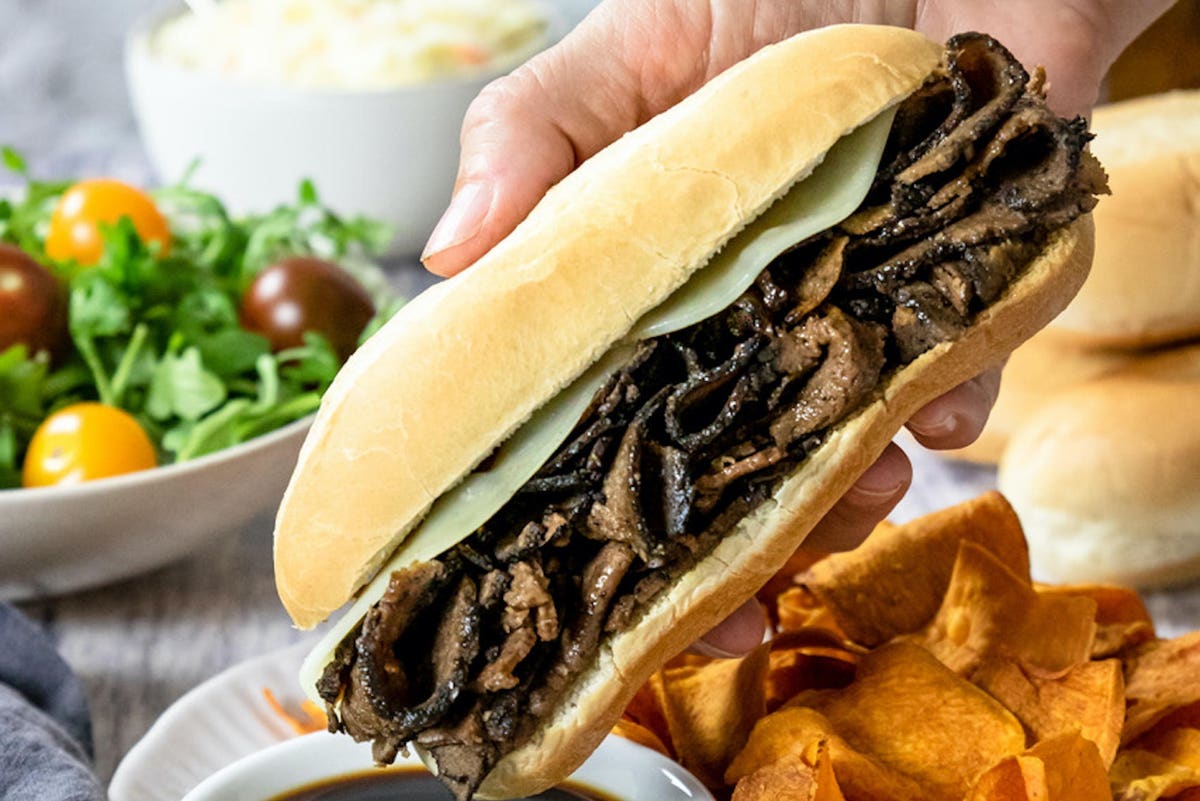 Plant-based diets are not only better for our health as individuals, but they’re also better for the health of our planet. Animal agriculture has been cited as the leading contributor to climate change, from excess methane released into the atmosphere to deforestation.

Increasingly people are trying to reduce their meat intake, especially since the pandemic, while still wanting to enjoy the great taste and flavors of the authentic meats they know and love. Many entrepreneurs are filling this need and creating new and unique companies and products.

As part of my research on purpose-driven companies, I recently had an email interview with Jenny Goldfarb, founder of Unreal Deli, which produces vegan Corn’d Beef, Roasted Turk’y and now their brand-new Steak Slices (currently available on their online store and rolling out into retail in late summer/early autumn).

Born in NYC, the great-granddaughter to New York delicatessen owners, Goldfarb could no longer contribute to the traditional meat and dairy industries after watching footage from factory farms, which she recalls “shattered her heart into a million pieces.” While brands like Impossible Foods and Beyond Burger are creating widespread attention for mainstream meat alternatives, Goldfarb saw a dearth in the market for deli slices and created Unreal Corn’d Beef as a response to the NY-style deli she craved, but could no longer enjoy after becoming vegan.

This industry is growing very quickly. In 2020 alone, plant-based food sales jumped by 27% and hit $7 billion. The global market for meat substitutes is forecast to hit $23.81 billion by 2023, a 28% rise over last year’s sales, according to the Wall St. Journal, Nov 18th, 2020. And a study released by the Boston Consulting Group and Blue Horizon in 2021 predicts that the alternative meat industry will be a $290 billion industry by 2035

Accordingly, Goldfarb was recently on Shark Tank and recieved a $250,000 investment from Mark Cuban who commented “Every great company starts with a great CEO, but needs great products to really succeed. Unreal Deli has both.”

For more on Unreal Deli, please read the lightly edited interview with Goldfarb below.

Chris Marquis: Why did you found Unreal Deli?

Jenny Goldfarb: I grew up eating everything, including plenty of meat. But after watching, and then researching, the sad truths of the animal farming industry, my heart shattered into a million pieces. I felt like I was duped into thinking eating animals was normal, healthy, humane. I realized I needed to change, so I painstakingly learned how to cook from the produce and grains aisles for myself, my meat-and-potatoes husband, and my toddler kids. There were plenty of bad meals along the way. But in time, the food started getting good, and my confidence started to grow. So, when I longed for the taste of a perfect corned beef sandwich with all the fixings on toasted rye and a sour pickle — I thought, maybe I can make that!?

Marquis: Tell me about your commitment to plant-based products. How did that come about? What is the most important social and/or ecological benefit Unreal Deli delivers?

Goldfarb: First and foremost, I started this business for the animals, but I also embrace the health benefits of eating a plant-based diet, and environmentally, it is now widely known the harmful effect factory farming has on the planet. The choice becomes even clearer as the alternatives become increasingly delicious.

I set out to make the world’s finest plant-based deli meats, which I started from my home kitchen. Now, two years after launching Unreal Deli, I pinch myself that we can now be found in thousands of grocery stores and restaurant locations nationwide.

Marquis: I understand you are in the process of B Corp certification. How is that coming along and what if anything are you learning through the process?

Goldfarb: As a company, we are working on becoming certified Woman Owned and B Corp certified, to uphold increasingly sustainable practices and to actively participate in a diverse workplace.

Marquis: It was great to see you on Shark Tank getting the investment from Mark Cuban. How has the connection with Mark helped scale your business?

Goldfarb: Working with Mark Cuban has been the coolest. He’s got a brilliant team with resources in all the business departments. I write to him every Friday with weekly updates, and he always responds – terse, but pinpointed. I know he’s impressed by what we’ve done and he’s a huge lover of our meats. Our Unreal Steak Slices premiere this month and are Cuban’s favorite. Mark announced for the first time in my Shark Tank segment that he’d gone vegetarian, and since then he’s come out that he’s also cut out dairy. It’s great to know I’ve got a partner who shares in our commitment to help animals.

Black people in Canada are just as educated as the rest of the country overall but new census data by Statistics Canada is shedding...
Read more

As a small business when you are looking for grants make sure to pay close attention to the deadlines the creators of the grant...
Read more