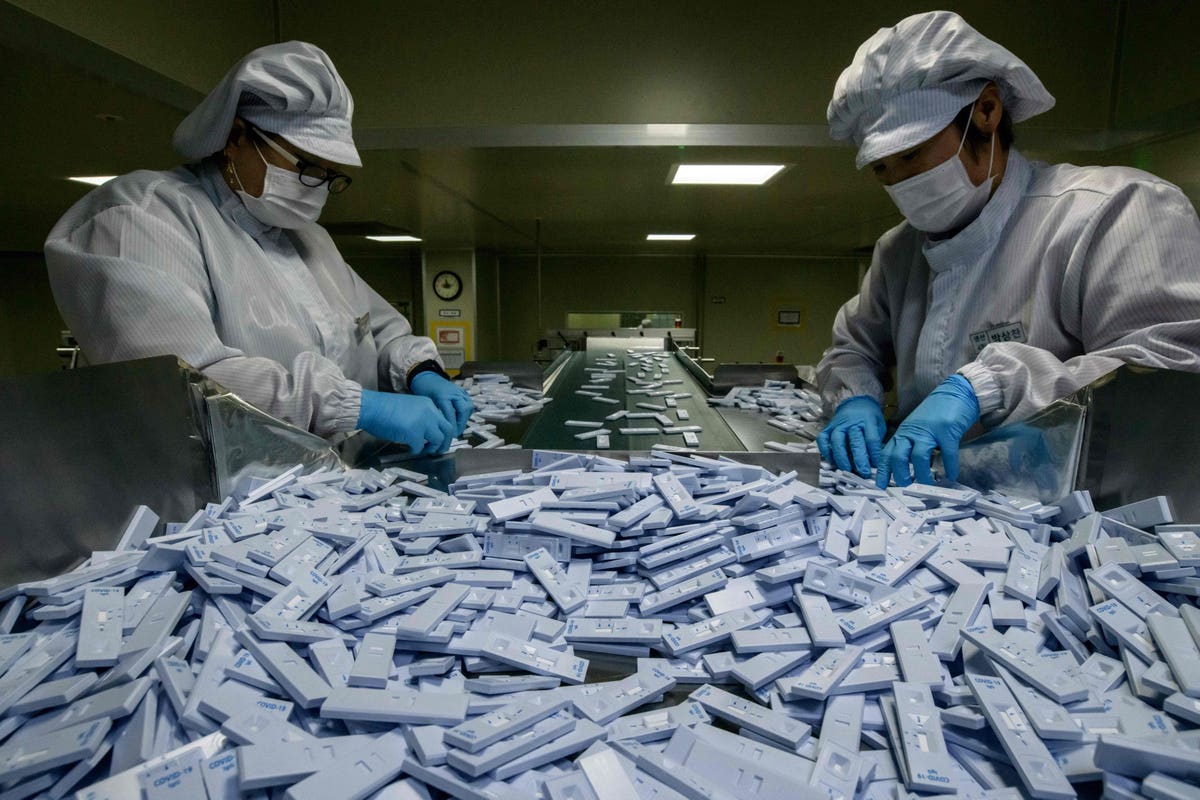 Cho Young-sik, founder of Covid-19 test maker SD Biosensor, is set to become a billionaire this month, when the South Korean company is expected to list its shares on the Korea Exchange.

SD Biosensor is offering 12.4 million shares at a price range of 45,000 won to 52,000 won apiece. At the midpoint of that range, the deal could raise 603 billion won (about $530 million) and value the company at 4.9 trillion won. The subscription period is to start July 8 and end July 9. The company says it plans to use the proceeds to expand production lines, diversify its product portfolio and expand its presence in Europe and South America.

Cho, who turned 60 in June, is the chairman of SD Biosensor and its largest shareholder, with a 32.07% stake in his own name. He also owns stakes in SD Biosensor through BioNote and SDB Investment, the second- and third-largest shareholders, respectively. In total, Cho owns just over 52% of SD Biosensor. Forbes estimates his net worth at $1.9 billion (after discounting the valuation because the company is still private).

SD Biosensor is currently best-known for its rapid Covid-19 test, called Standard Q. The company, which is based in the city of Suwon, south of Seoul, exports almost all of its Standard Q products. Last month, the Singapore government granted interim authorization for four Covid-19 self-test kits to be sold at pharmacies, two of which are made by SD Biosensor. Early on in the pandemic, SD Biosensor was among the first batch of Covid-19 test makers approved by the Indian government.

The company reported that revenue rose 23-fold to 1.7 trillion won ($1.4 billion) in calendar year 2020, when the pandemic hit, and net income surged almost 200-fold to 622 billion won ($527 million). SD Biosensor makes most of its money—about 84% of total revenue in 2020—from Standard Q sales. It got a big boost when the Slovakian government bought 13 million Covid-19 tests from SD Biosensor in late 2020, enough to test its entire population twice over.

Demand for SD Biosensor’s Covid-19 tests is expected to remain high this year as the pandemic continues to spread in many parts of the world. Just last month, Cambodia bought 1 million Covid-19 tests from SD Biosensor. Before the pandemic, the company made most of its money from blood glucose monitoring devices.

SD Biosensor and its peers in South Korea were among the earliest to mass produce Covid-19 tests, as the country was the first to suffer the worst major coronavirus outbreak outside China. SD Biosensor, Seegene and two other Korean companies had their first testing kit approved by the Korea Centers for Disease Control and Prevention in February 2020. “It was an urgent matter so it was important to respond quickly,” Chun Jong-yoon, Seegene’s chief executive, told Forbes Korea in March 2020. “The fact that the KCDC approved this in two weeks was unprecedented.” Chun, who is the largest shareholder of Seegene with a 18.21% stake, has an estimated net worth of $690 million.

Cho founded the predecessor company to SD Biosensor, called Standard Diagnostics (SD), in 1999. In 2010, Cho sold a part of his stake in SD to Massachusetts-based Inverness Medical Innovations and spun off the biosensor device business, which uses biological material such as antibodies to diagnose disease, to create SD Biosensor. Before starting SD, Cho, who holds a doctorate in veterinary medicine from the prestigious Seoul National University, worked at Korean pharmaceutical company Green Cross.

Two other billionaires on Korea’s 50 Richest list—Seo Jung-jin and Shin Dong-guk—also made their fortune from healthcare. Seo, who cofounded drugmaker Celltrion in 2002, topped this year’s Korea wealth ranking with a net worth of $12.5 billion. Last year Celltrion developed a Covid-19 antibody treatment, which was conditionally approved in South Korea in February, pending phase-three clinical trial results. Meanwhile, Hanmi Pharmaceutical, where Shin has most of his personal wealth, is focused on manufacturing Covid-19 vaccines.