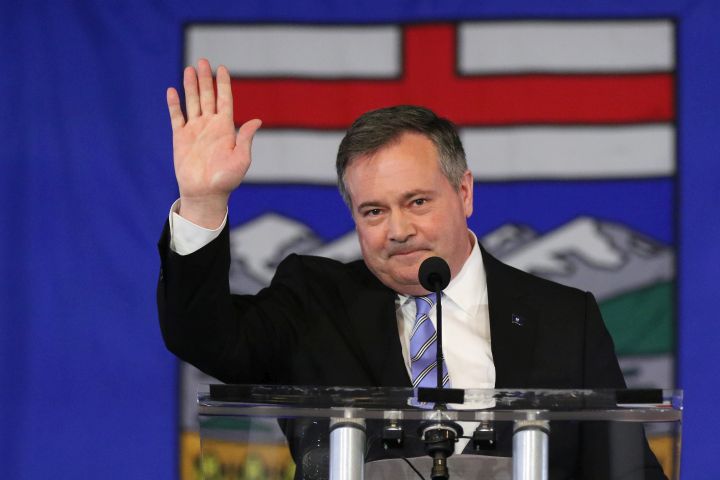 The difficulty that can result from merging two political parties was underscored by Premier Jason Kenney’s announcement Wednesday that he intends to step down as leader of Alberta’s United Conservative Party, according to one political commentator.

“The first problem that has to be acknowledged, and we’re seeing this at the federal level as well, is that combined conservative parties are difficult to lead,” Lori Williams, an associate professor of policy studies at Mount Royal University, told Global News on Wednesday night.

Earlier in the evening, Kenney spoke to UCP members immediately following the party releasing results from his leadership review vote which saw his leadership earn support from only 51.4 per cent of those who cast a vote.

“(Combined conservative parties are) difficult to govern, they’re difficult to manage and indeed the only recent leader that’s been successful in doing so was (former prime minister) Stephen Harper,” Williams said.

“It has to be said that this was a difficult job to be done, and the fact that Jason Kenney brought the parties together and got them to agree to go forward was quite an accomplishment, but a difficult thing to sustain.”

Last year, several UCP constituency associations had pushed to have Kenney face an early leadership review. He had faced growing and more vocal dissent with some party members being angered by his response to the COVID-19 pandemic, seeing many of his government’s public health restrictions as unreasonably infringing on personal liberties.

“I wish him all the best and well and hopefully he’s right, we’ll clear the air and the future leadership race will set a new tone for our party and we’ll hopefully all come together under the new leader,” said Victor Vargas of the Edmonton-Beverly-Clareview UCP Constituency Association

“I think Jason Kenney didn’t often get a lot of the credit he deserved… still, he made the decision that is probably best for our party and our province going forward.”

Conrad van Hierden of the Livingstone-Macleod UCP Constituency Association said he knew the leadership review vote “could be close, could be controversial, but at the end we wanted unity and at 51 or 52 per cent or whatever it was, it wouldn’t have been that.”

“He’s such a smart man,” he said of the premier. “He knows what’s probably best for the party and we do need to unite because we can’t divide.

“We can’t have two conservative parties.”

“The people who came together (when the Wildrose Party and Progressive Conservative Party merged to form the UCP) didn’t agree with one another on a lot of different points,” Williams said. “And in some cases, they didn’t like or respect one another, and I think the combative style of leadership that Jason Kenney chose to deal with, that magnified some of the divisions.

Williams added that she believes Kenney was expecting to have to face some hostile colleagues at a caucus meeting Thursday after the results of the vote were released, and realized “the future wasn’t going to get any better for him.”

The premier’s most high-profile political foe, a UCP MLA who lost the party’s 2017 leadership race to Kenney, told 630 CHED on Wednesday that the leader’s announcement was “the right thing to do and it was the honourable, decent thing for him to do and very professional.”

“I want to thank Jason Kenney for his quarter-century of public service for Albertans and Canadians,” Brian Jean said. “I’ve said it for several weeks now that if he could not get a survivable number, the members have clearly spoken.

“They want a United Conservative Party that listens, that consults and that thoughtfully implements practical and effective conservative policies that will benefit all Albertans, and I think that’s what’s important — tonight they’ve had their say.”

2:27
Back me or risk losing election to Alberta NDP: Kenney


The 2017 leadership race in which Jean lost to Kenney remains under RCMP investigation after allegations of criminal identity fraud were made. Jean has also raised concerns about allegations this month’s leadership review saw illegal bulk buying of memberships. The Canadian Press has reported that documents leaked to them indicate Elections Alberta is investigating those concerns.

“We have some great talented people — Albertans — that can take the reins from here and I think the best thing for Jason Kenney to do now is to step out of the limelight and leave us to try and rebuild and renew this party,” Jean said, adding that he still plans to put his name forward for the next UCP leadership race.

Jean noted the UCP was created in part with the intent of gaining support from “all types of conservatives” to avoid another electoral win by the NDP, which won a majority in the 2015 election.

NDP Leader Rachel Notley tweeted about Kenney Wednesday night and said that “there are obviously many things about which we don’t agree, but that doesn’t negate the time and sacrifice that goes into taking on the role of premier.”

“I want to thank Jason Kenney for his public service,” she tweeted. “I wish Jason the best.

“I will have more to say to Albertans tomorrow.”

Williams suggested that with a provincial election expected to take place about a year from now, Kenney’s announcement Wednesday still gives the UCP an opportunity to regroup before voters head to the polls.

“(The coming UCP) leadership race probably won’t be concluded until the fall,” she said. “That might be enough for them to stick together to make it through the next election, but much is going to depend on who that leader is.”

–With files from Dean Bennett and Colette Derworiz, The Canadian Press

What Cases Could Be Next for the Supreme Court

Businesses Are Bracing for the Political and Social Fight Post-Roe

Reeling from competing demands from stakeholders — including activists, clients, consumers, shareholders and elected officials — businesses are increasingly caught in the middle of...
Read more

Every year, 100-year-old Angélique Beauchemin watches more of her land crumble into the St. Lawrence River. From her home along a busy stretch of river...
Read more

MLA Carla Beck made history by becoming the first female leader of the Saskatchewan NDP on Sunday at the Delta Hotel in Regina. Beck secured...
Read more