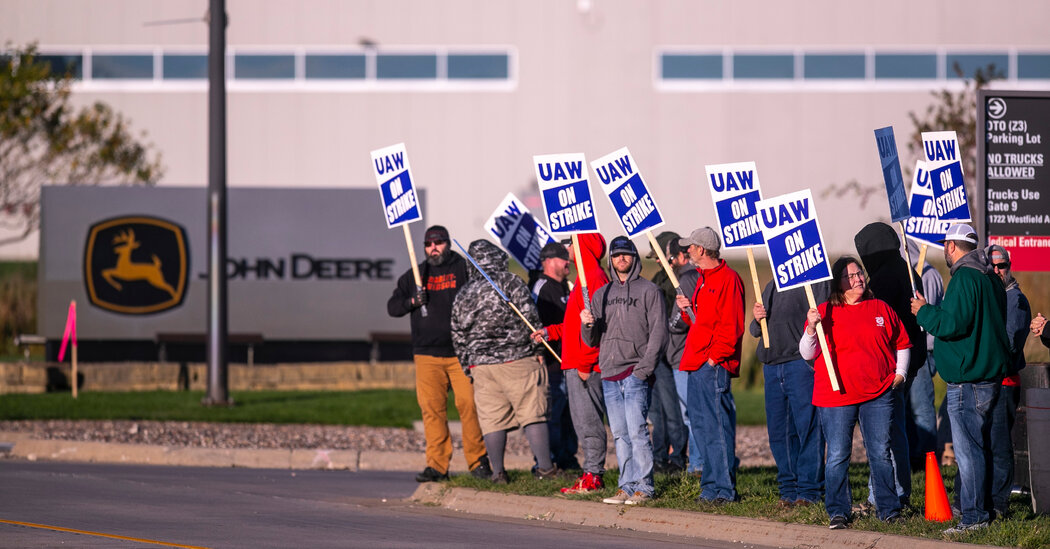 One day after workers at the agriculture equipment maker Deere & Company voted down a second contract proposal, the company said Wednesday that the proposal was its best and final offer and that it had no plans to resume bargaining.

The rejection of the contract by roughly 10,000 workers extended a strike that began in mid-October, after workers based primarily in Iowa and Illinois voted down an earlier agreement negotiated by the United Automobile Workers union.

The company confirmed its position in an email after it was reported by Bloomberg. A U.A.W. spokesman said only that the union’s negotiating team was continuing “to discuss next steps.”

Marc A. Howze, a senior Deere official, said in a statement Tuesday night that the agreement would have included an investment of “an additional $3.5 billion in our employees, and by extension, our communities.”

“With the rejection of the agreement covering our Midwest facilities, we will execute the next phase of our Customer Service Continuation Plan,” the statement continued, alluding to Deere’s use of salaried employees to run facilities where workers are striking.

Many workers had complained that wage increases and retirement benefits included in the initial proposal were too weak given that the company — known for its distinctive green-and-yellow John Deere products — was on pace for a record of nearly $6 billion in annual profits.

According to a summary produced by the union, wage increases under the more recent proposal would have been 10 percent this year and 5 percent in the third and fifth years. During each of the even years of the six-year contract, employees would have received lump-sum payments equivalent to 3 percent of their annual pay.

That was up from earlier proposed wage increases of 5 or 6 percent this year, depending on a worker’s labor grade, and 3 percent in 2023 and 2025.

The more recent proposal also included traditional pension benefits for future employees and a post-retirement health care fund seeded by $2,000 per year of service, neither of which were included in the initial agreement.

Chris Laursen, a worker at a John Deere plant in Ottumwa, Iowa, who was president of his local there until recently, said he voted in favor of the new agreement after voting to reject the previous one.

But Mr. Laursen said he still had concerns about the vagueness of the company’s commitment to improving its worker incentive plan, and such concerns appeared to weigh on his co-workers, 55 percent of whom voted to reject the newer contract.

Another Iowa-based worker, Matt Pickrell, said that some co-workers skeptical of the second proposal had expressed a desire for a larger initial increase than the 10 percent the company offered.

Mr. Pickrell said that he, too, had opposed the initial agreement but had voted in favor of the more recent one because of the improvements in retirement benefits.

Larry Cohen, a former president of the Communications Workers of America, said the second “no” vote could indicate that members felt that the strike was working and that further gains were possible, despite the company’s declaration that it was finished bargaining.

“They’re saying what they believe — their feelings are hurt,” Mr. Cohen said of Deere. “But what are they going to do about it? They’re not going to get the workers back.”

Mr. Cohen said that Deere employees were among the relatively rare group of workers in the United States able to bargain on a companywide scale and that that, along with their stature in the communities where plants are situated, gave them considerable leverage.

The work stoppage at Deere was part of an uptick in strikes around the country last month that also included more than 1,000 workers at Kellogg and more than 2,000 hospital workers in upstate New York.

Overall, more than 25,000 workers walked off the job in October, versus an average of about 10,000 in each of the previous three months, according to data collected by researchers at Cornell University.