Jes Staley Is Out at Barclays Over Ties to Jeffrey Epstein 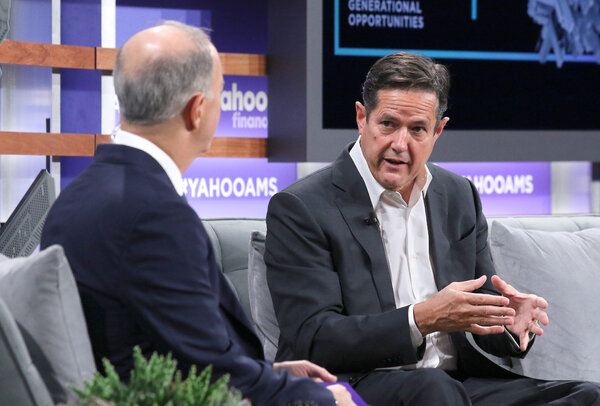 British regulators had examined what Jes Staley told his bank’s board about ties to the disgraced financier.

Barclays announced this morning that Jes Staley had stepped down as C.E.O. after he and its board learned of the results of a two-year investigation by British regulators into his ties to Jeffrey Epstein. This makes Staley the latest business leader to face repercussions from their association with the convicted sex offender.

The inquiry focused on what Staley told the board about his ties to Epstein. The men shared ties as far back as at least 1999, when Staley ran JPMorgan Chase’s private bank and Epstein was a source of client referrals. Emails shared by JPMorgan with British regulators suggested that the two men were friendlier than Staley had said. Staley visited Epstein’s Caribbean island as recently as 2015. He said he had cut ties to the financier by the time he became Barclays’ chief in December of that year.

Regulators ultimately forced Barclays’ hand, which isn’t a great look. In a statement, the board said that the investigation’s preliminary conclusions, and Staley’s intention to contest them, led to his departure. That implies that the bank was satisfied with Staley’s explanation of his relationship with Epstein, even if regulators appear more wary. The question being asked in the City of London and on Wall Street is: Why?

The board had stood by Staley since Epstein’s arrest in 2019, and had recommended his staying on last year despite the investigation. The board reiterated that the report didn’t find that the banker actually knew of Epstein’s crimes. (Staley had also kept the board’s backing despite being forced to pay millions in fines over his attempt to unmask a whistle-blower in 2016.)

Staley becomes the latest high-profile executive to lose his job over Epstein ties. Others include Leon Black, who announced his departure as Apollo Global Management’s chief after the revelation that he had paid Epstein $158 million, and Les Wexner, who similarly stepped down as the C.E.O. of L Brands after multiple investigations into his close ties to Epstein.

Nevertheless, Barclays pledged continuity. Staley will be replaced by C.S. Venkatakrishnan, another former JPMorgan executive who was most recently Barclays’ co-president and had already been known as a potential successor. Investors appeared to take the news in stride, with shares down less than 2 percent in London trading.

As the G20 ends, COP26 begins. The just-concluded Group of 20 meeting included a global pact on raising corporate taxes. But it offered few concrete agreements on climate change, just as world leaders head to Glasgow for a pivotal U.N. climate summit. (Of note: Jen Psaki, the White House press secretary, said she had tested positive for Covid, and said her last meeting with President Biden was last Tuesday.)

Is the Delta variant surge over? New case counts and hospitalizations are dropping in most states, though experts worry that family gatherings over the winter holidays could lead to a resurgence. Meanwhile, children aged 5 to 11 could begin receiving the Pfizer vaccine in the U.S. as soon as Wednesday.

American Airlines cancels over 1,200 flights. The cancellations, equivalent to about 12 percent of the airline’s weekend flights, came weeks after Southwest canceled nearly 2,000 flights. Both companies cited bad weather and staff shortages, the latter of which is unlikely to go away anytime soon.

Saudi Aramco’s blowout profit underscores oil’s resurgence. The oil giant said that its third-quarter earnings nearly tripled from a year ago, as the price of petroleum has soared. Aramco said it plans to increase output through 2037, but also plans to hit net zero emissions by 2050.

Last night, Roblox, a gaming platform that attracts more than 40 million players daily, came back online after a multiday outage. The outage left Roblox’s legions of preteen fans scrambling for things to do (some actually went outside to play). DealBook turned to The Times’s Kellen Browning, a technology reporter who has covered the rise of Roblox, for his thoughts on what the extended outage means for the popular gaming (and advertising) platform:

When Facebook suffered an outage last month, we saw how impactful it could be on communications, productivity and more. For kids, the “Roblox apocalypse,” as one put it, carries the same degree of gravity. Three-quarters of 9-to-12-year-olds in the U.S. play or have played Roblox.

When Facebook went down, some content creators (like gamers) who use the platform to make money worried that they might struggle to make ends meet. Roblox is no different. An entire ecosystem is built around the platform, from the independent developers who code for games hosted on the platform, to influencers who make Roblox-related content on YouTube and elsewhere.

Despite the fear the outage instilled among tweens, Wall Street analysts said that the outlook for Roblox’s business is unaffected — the company’s shares have risen since the platform was knocked offline Thursday afternoon.

At a time when technology companies are unpopular in Washington and the booming crypto industry is drawing scrutiny from lawmakers and regulators, the venture capital firm Andreessen Horowitz is pursuing a particularly audacious plan: to both own big chunks of the market for digital currencies and write the rules for how it will operate.

Andreessen is drafting laws. To push its policy agenda, the firm, also known as A16Z, recently launched a D.C. lobbying blitz. It hired experienced government hands to lead these talks, including the ex-Justice Department officials Katie Haun and Jai Ramaswamy; Tomicah Tillemann, a former aide to President Biden when he was a senator; and Brian Quintenz, a former C.F.T.C. commissioner. None is registered as a lobbyist, so they limit their time with officials to comply with the rules and argue that their outreach is part of mutually beneficial educational efforts.

The firm’s plan addresses issues with bipartisan support, like overcoming China’s head start in digital currency and reclaiming America’s role as the leading tech innovator. But experts question whether Andreessen’s approach is good for the nation and consumers.

It’s “a classic case of asking the fox to design the henhouse,” said Rohan Grey, a finance lawyer and law school professor who has advised congressional Democrats on digital payments legislation. Draft legislation proposed by A16Z would exempt many of the crypto companies it has invested in from certain tax reporting, consumer protection and anti-money-laundering requirements.

Read the full article on Andreessen’s lobbying by Eric Lipton, Daisuke Wakabayashi and DealBook’s Ephrat Livni. Also, here’s how venture capitalists think crypto will reshape commerce and why big banks, which once tried to kill crypto, are now embracing it.

► Time to taper: Fed officials will gather this week, and their two-day meeting is a big one. The central bank is expected to announce on Wednesday that it will begin winding down the bond-buying efforts it put in place to support the economy during the pandemic.

► The state of jobs: On Friday, the Labor Department will report how many jobs were filled in October. Job growth slowed to the weakest pace of the year in September, but hospitalizations and deaths linked to the coronavirus fell in October, so economists expect job growth to have accelerated.

► Supreme Court: Two highly anticipated cases will be argued, starting today with challenges to the Texas law that bans most abortions after six weeks of pregnancy. On Wednesday, the court will hear its first major Second Amendment gun case in more than a decade.

For Trump’s SPAC, it’s a matter of timing

A Times investigation found that former President Donald Trump’s recent SPAC deal may have skirted securities laws and stock exchange rules, specifically the prohibition against blank-check firms listing their shares with a merger target already planned. Most SPACs take at least a year to find and merge with a target, but the SPAC merging with Trump’s media venture sewed up a deal within weeks of its I.P.O.

The background: Patrick Orlando, a former trader at Deutsche Bank, originally planned to take the newly formed Trump Media Group public through a different SPAC, Benessere, which raised $100 million in a January I.P.O. Talks between Benessere and Trump Media dated to at least March, though the SPAC’s funds were eventually deemed inadequate. (Benessere is still looking for a company to buy.)

Orlando filed for an I.P.O. for another SPAC, Digital World, in May. “We have not selected any specific business combination target,” it said in S.E.C. filings. Within weeks of hitting the stock market in September, raising nearly $350 million, it announced the deal with Trump Media.

What’s the problem? Securities lawyers said that any conversations between Orlando and Trump’s teams before Digital World’s I.P.O. may have needed to be disclosed to investors. Since SPACs could serve as backdoor vehicles for companies to go public without the scrutiny of a traditional listing, they aren’t supposed to have a merger planned at the time of their I.P.O.

But bankers said that if serial sponsors, like Orlando, have conversations with a merger target on behalf of one SPAC, it does not preclude them from buying that company with a different SPAC. For example, the Betsy Cohen-backed SPAC that acquired Perella Weinberg disclosed in filings that its executives had discussed acquiring Perella through a different SPAC, but those talks never reached the level of signing a letter of intent.

Now what? Given Trump’s high profile and the frenzied trading in the stock, which is up nearly 600 percent since announcing the merger, scrutiny is likely to follow from regulators who are already looking for ways to rein in the SPAC market. Last week, Orlando wouldn’t say much about how the deal came together. “It’s been wild,” he said.