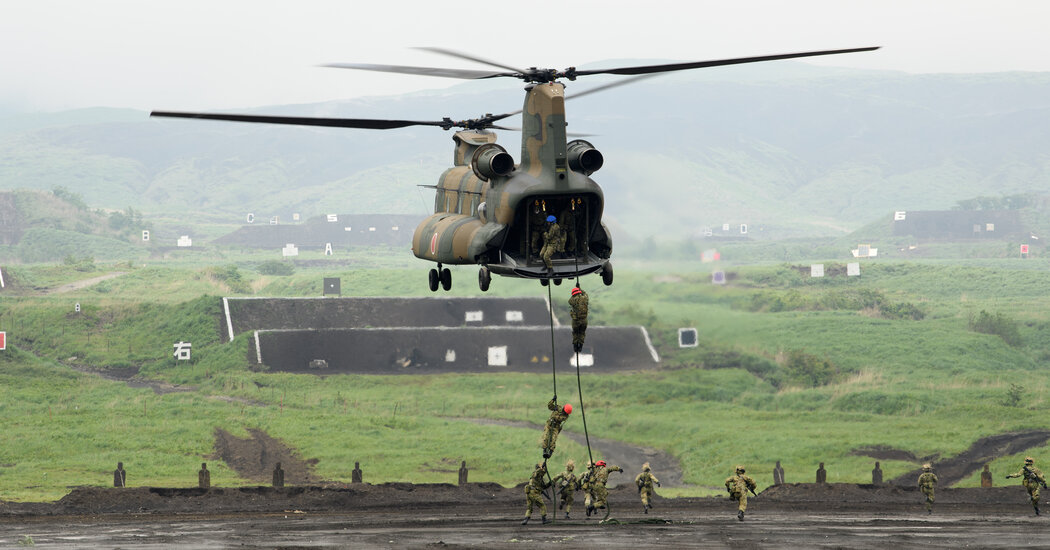 The budget increase, the biggest in decades, comes as officials warn that tensions over Taiwan could pull Japan into a conflict between the United States and China.

TOKYO — Japan’s cabinet on Friday approved the country’s biggest increase in military spending in decades, as officials expressed growing concern about the possibility of being pulled into a conflict over Taiwan.

The increase of 6.5 percent is part of the largest annual budget package in Japan’s history, totaling more than $940 billion. It includes hundreds of billions in spending meant to help the economy recover from damage inflicted by the coronavirus pandemic.

It also includes more than $51.5 billion for the military, reflecting a substantial increase in a defense budget far smaller than that of its ally the United States or of China, the regional giant. Officials have argued that the spending is needed to protect Japan in a security environment that is becoming “more challenging at unprecedented speed.”

In recent months, Japanese politicians and policymakers have said that regional stability is facing growing threats because of tensions between the United States and China, which some fear could lead to conflict over Taiwan, accidental or otherwise.

In light of those concerns, officials have increased the pace and scope of military exercises with the United States and other nations, and they have accelerated spending on projects seen as key to protecting Japan against a possible conflict near its shores.

The spending approved by the cabinet is less than what Japan’s defense ministry requested this summer. While large by Japanese standards, it is far below the military budgets of the United States, at around $778 billion, and China, estimated at $252 billion. The new figure includes spending approved last month in Japan’s largest-ever supplementary defense budget.

Japan’s Parliament must still approve the budget figures, but there is little doubt that it will do so.

Military spending in Japan has increased steadily since former Prime Minister Shinzo Abe took office in 2012, promising to strengthen the country’s military forces and revise its pacifist Constitution. That charter, drawn up by the American occupiers after World War II, forbids Japan to wage war except in self-defense. Conservative politicians have long sought to change that provision, arguing that the country needs more flexibility to defend itself against regional threats.

For many years, that meant North Korea, whose nuclear and missile tests were seen as posing a threat to Japan. But in recent years, Japan has come to see a greater danger in China’s military buildup and its increasing assertiveness in the region.

Japan and China both claim sovereignty over a group of Japanese-controlled islets in the East China Sea, known as the Senkakus in Japanese and the Diaoyu in Chinese. But over the last year, defense hawks in Japan have focused more intently on rising tensions over Taiwan.

In recent months, Beijing has engaged in several dramatic displays of military power around Taiwan, a democratically governed island that China claims as an inherent part of its territory. The United States and other countries have loudly criticized those maneuvers and sent their own ships to the region in response.

Japanese across the political spectrum have begun openly speculating about what was once a taboo subject: how a military confrontation over Taiwan would affect Japan. In July, defense planners called for a “sense of crisis” over the tensions in an annual white paper, the first to mention Taiwan.

If conflict were to break out, policymakers argue, Japan could be dragged in, potentially putting at risk some of the islands in the Ryukyu archipelago in the country’s southwest.

The military budget approved Friday includes funds for fortifying some of those islands with missile installations and garrisons for Japanese soldiers. Some inhabitants of the Ryukyus fear that those measures could make them targets in the event of a conflict.

New spending will also go toward bolstering Japan’s capabilities in such domains as cyberwarfare and conflict in space, as well as a substantial increase for researching advanced technologies that the defense ministry describes as potential “game changers.”

The country also intends to purchase an additional 12 F-35s, an advanced American fighter.

The size of Japan’s defense budget is a sensitive issue both at home and among its neighbors, a legacy of the country’s aggressive role in World War II. The vast majority of Japanese have long opposed large increases in military spending, and there is little public support for amending the Constitution to remove the prohibition against offensive warfare.

For decades, politicians tried to keep military spending below 1 percent of Japan’s annual economic output. But defense budgets have crossed that threshold several times in recent years, including the one approved on Friday.