Ivory Coast, a Big Cocoa Exporter, Tries to Move Up the Ladder 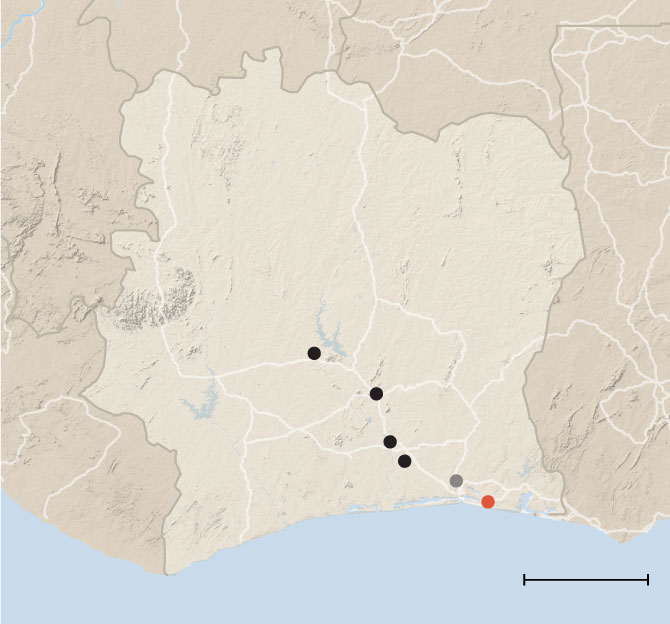 A new generation of Ivory Coast chocolatiers is striving to change an industry that has long left cocoa farmers in poverty.

GRAND-BASSAM, Ivory Coast — The worker carefully peeled the husks from the cocoa beans to keep them from breaking, then tipped them into a metal tray that a colleague slid into an oven. The aroma of roasting beans filled the small shop in this seaside town, where the worker, Marie-France Kozoro, readied the next batch for its journey to becoming chocolate.

Nearly six million people rely on the cocoa industry in the West African nation of Ivory Coast, the world’s biggest cocoa producer. But most of them are not involved in the processing of the crispy, sour beans that are turned into a sweet treat.

Instead, they focus on growing, harvesting and selling raw cocoa beans bound for Europe and are mostly excluded from the financial benefits produced by the lucrative chocolate industry. It is chocolate made abroad, not raw cocoa, that yields the most revenue, and that money flows to larger foreign producers.

But in recent years, a new generation of Ivorian chocolatiers has been trying to change the equation. Partly financed by the government and international aid agencies, the chocolatiers are turning cocoa beans into cocoa powder, beverages, chocolate bars and other goods in Ivory Coast, hoping to develop a local chocolate industry whose revenue can flow to farmers and other cocoa workers like Ms. Kozoro.

At Choco+, the artisanal workshop where Ms. Kozoro works, a dozen employees roast and grind cocoa beans, which they make into chocolate paste and cocoa tea, among other products.

“We’re getting by, little by little, thanks to cocoa,” said Ms. Kozoro, 30, a single mother who used to work long hours in a Chinese restaurant. At Choco+, she earns 50 percent more than the country’s monthly minimum wage of about $94, and her shift allows her to pick up her 3-year-old daughter from a school across the street at a reasonable hour.

Similar efforts to spur a domestic chocolate industry have also sprung up in other cocoa-producing countries in West Africa, including Ghana and Nigeria.

Compared with Europe, the consumption of cocoa in the region remains tiny — in Ivory Coast, it is estimated to be about a pound per person per year — but it is rising for a range of cocoa-based products.

Chocolate bars tend to be preferred by foreigners, while West Africans favor other delicacies, including cocoa pralines, cocoa butter, cocoa powder and chocolate spread. Entrepreneurs are also developing cocoa-flavored beers, liquors and vinegars, and a chocolate beverage mixed with bouye, the juice of the baobab tree’s fruit.

“The message around cocoa in Ivory Coast has always been to export, export, export,” said Hervé Dobinou, the manager at Choco+. “But there’s never been communication about the consumption of cocoa here.”

The Ivorian government is working to promote more ventures like Choco+ that produce a variety of cocoa-based products, as well as bigger industrial companies that can help build a domestic chocolate industry.

The need for better wages is immense: Of the roughly one million cocoa farmers in Ivory Coast, nearly 550,000 live below the global poverty line, according to the World Bank, and most of them have never tasted chocolate.

On a recent afternoon near Bouaflé, a town in central Ivory Coast, Sylvain Kofi Kona trudged through his cocoa farm and handed cash to two young workers who had just cleared it of leaves and cocoa pods. A motorcycle accident four years ago maimed one of his arms and left him with a limp.

Mr. Kona and his crew cultivate cocoa the way it has been done for decades. In small fields, they slash ripe pods from cocoa trees in the spring and fall, then extract the pulpy white beans, which turn brown after they dry on tarpaulins or banana leaves. They sell the beans to local cooperatives or buyers at nearby markets.

The work is grueling and too complicated to be automated. Yields are low. The price of a pound of cocoa in Ivory Coast has dropped this year to 56 cents from 70 cents last year because of several factors, including fluctuations in demand and successful bargaining by the industry’s bigger companies. Even so, many farmers like Mr. Kona sell at a cheaper price to buyers who offer cash rather than checks because banks are not easy to find in rural areas of the country.

As the pain in his arm became unbearable this summer, Mr. Kona said he sold about 100 pounds of cocoa beans for about 35 cents a pound, well below the market rate, so he could buy medicine right away.

Many farmers say cultivating other crops like cassava and corn is easier and more profitable and can help them better feed their families. But they remain loyal to cocoa out of a sense of national pride.

“We were born in cocoa, it’s in our blood,” said François d’Assise Mbra, a cocoa farmer and a friend of Mr. Kona. “You can’t escape it. Cocoa pulls you.”

To increase cocoa farmers’ incomes, the Ivorian government plans to invest about $1.6 billion in a vast overhaul of the industry. Part of that will finance businesses that convert beans into cocoa-based products.

The country’s economy minister, Adama Coulibaly, said he found it hard to fathom that more than 60 years after Ivory Coast’s independence, 70 percent of cocoa production leaves the country as raw cocoa beans, forfeiting most of the revenue they could yield.

Though Ivory Coast accounts for roughly 45 percent of the cocoa produced around the world, it receives only about 7 percent of the global revenue from the commodity.

In an effort to lure more domestic customers, local firms are turning to appealing marketing arguments: They say that cocoa provides cardiovascular benefits and that its beans are an aphrodisiac. Studies have shown that both claims may have some merit.

At Choco+ on a recent morning, a 55-year-old customer, Benjamin Nda, bought cocoa tea, cocoa butter and a few ounces of roasted beans. Mr. Nda, a physics professor who has diabetes, said eating five beans every day for the past few months had helped lower his blood pressure.

He and his wife, he said, have also noticed other benefits. After his wife ate a bean one night, he also ate one. Then they both went up to five beans, Mr. Nda said with a smile.

“Believe me,” he added coyly, “it was extraordinary.”