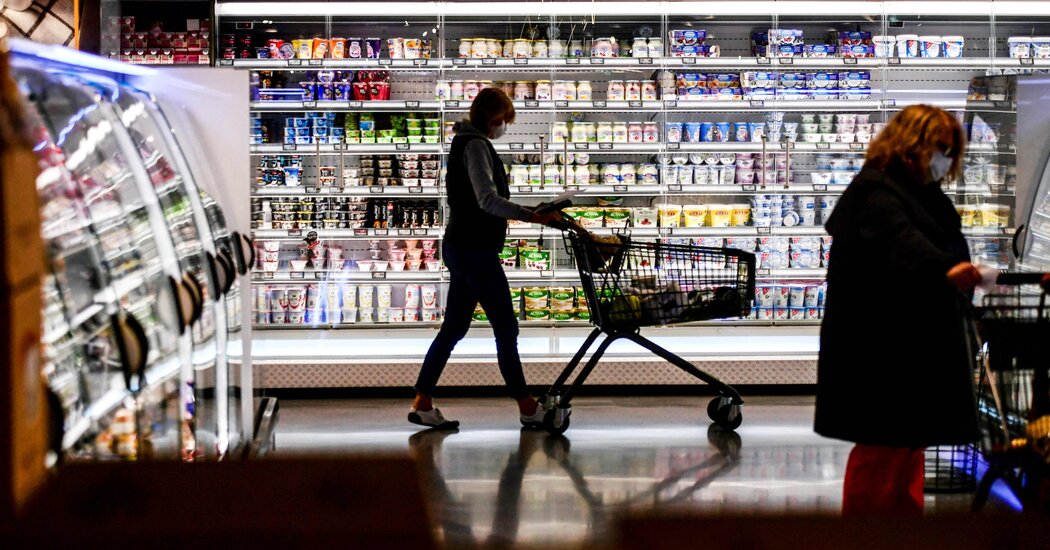 High energy prices and snarled supply chains drove up inflation in Europe, with Germany hitting a level not seen in more than 40 years and Spain setting a similar record, with prices soaring nearly 10 percent.

The office blamed the jump in inflation on Russia’s attack on Ukraine, which has driven up energy prices and further slowed supply chains that had only begun to recover from bottlenecks spurred by the pandemic.

“A similarly high inflation rate in Germany was last recorded in autumn 1981 when mineral oil prices had sharply increased as a consequence of the Iran-Iraq war,” the office said in a statement.

In both countries the rates were higher than anticipated, and for Spain it was the largest increase since 1985 — Spain’s inflation rate jumped 9.8 percent from a year ago in March.

European Union officials are set to release inflation data for the bloc on Friday. The sharp rise in prices in March, which provide an early indication of how the war in Ukraine is rippling through the economy, will put more pressure on the European Central Bank. At its recent meeting this month the E.C.B. said it would begin scaling back some of its bond-buying stimulus measures while also warning that the conflict would put a drag on the economy.

The German Council of Economic Experts, which advises the government in Berlin, warned in a report published on Wednesday that its “outlook for the economy in Germany and the euro area has worsened sharply” because of the war in Ukraine, which reached its 34th day on Wednesday and shows few signs of stopping.

Before the outbreak of the war, the council said that increases in industrial production and the robust labor market pointed to an economic recovery, after the downturn linked to the shutdown of the global economy surrounding the coronavirus pandemic. The council’s experts urged Germany to continue its push to diversify energy supplies and move away from its dependence on Russia, which supplies 55 percent of all Germany’s natural gas needs. Germany released plans last week to make drastic cuts to Russian energy.

“The high dependence on Russian energy supplies entails a considerable risk of lower economic output and even a recession with significantly higher inflation rates,” the council said.

Prime Minister Pedro Sánchez of Spain, speaking to lawmakers in Madrid, also largely blamed Russia’s war on Ukraine for surging prices. He said that his government would introduce new emergency measures to help contain prices, including for food.

Supermarket shelves in Germany yawn empty where stocks of flour and sunflower oil normally stand, as consumers have snapped up more than their share in anticipation of potential shortages.

Germany’s Agriculture Ministry sought to assuage fears of food shortages on Wednesday, pointing out that the country is largely self-sufficient in producing wheat. But the ministry acknowledged that prices for food were rising, driven by an increase in prices for energy and fertilizer.

“The security of food supply is guaranteed in Germany,” the ministry said.

Mr. Sánchez said that his government would introduce a regulation allowing supermarkets to limit purchases of certain items to avoid hoarding.

In recent weeks, Spanish supermarkets have at times run out of items like sunflower oil that are usually imported from Ukraine and Russia. The problems have been exacerbated by a lengthy transport strike in Spain, which forced the government to offer truckers compensation last week for their soaring gas bills.

Mr. Sánchez said that the inflation numbers did not look good and pointed out that, coming on amid a pandemic that hit Spain particularly hard in 2020, the economic consequences remained unpredictable.

“We have to say that no emergency plan can be considered definitive,” he said.

Canadian military veterans and advocates say the case of a veteran being offered medical assistance in dying by a Veterans Affairs Canada (VAC) employee...
Read more