In This Remote American Outpost, Pandemic Recovery Is a Faraway Dream 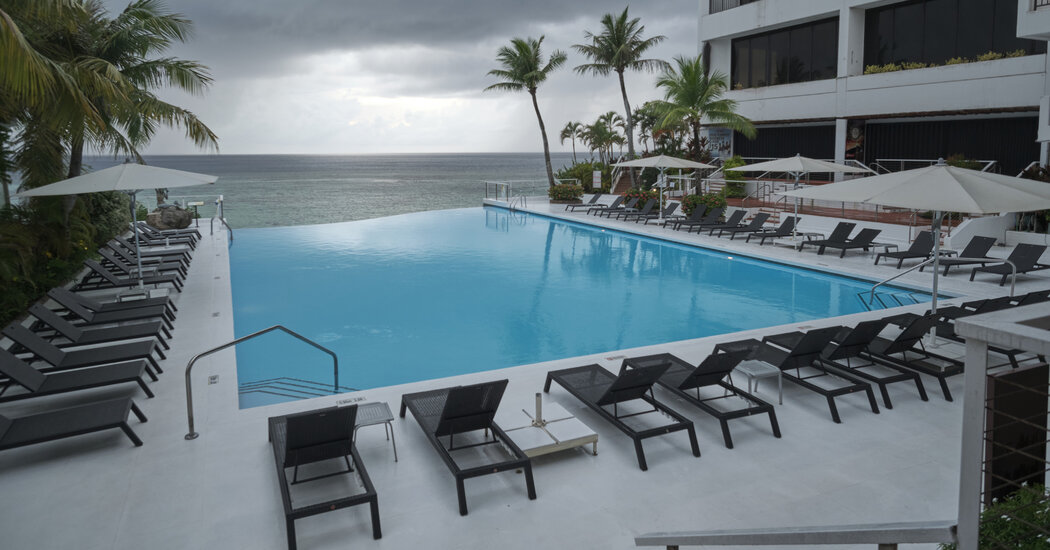 Tourism-dependent Guam has done almost everything it can to restart its economy. Its Asian neighbors may have to bounce back first.

Down an oceanside road, in the tourist district of Tumon, the gift shop at the Hyatt Regency displayed its beach floaties and fidget spinners in total darkness. Nearby, a shopping plaza adorned with miniaturized street lamps had only one guest: a stray dog sunbathing in the tropical heat. Worn posters on its walls advertised a TV series that premiered last year.

“The hustle and bustle here has just evaporated,” said Madelaine Cosico, the Hyatt’s director of sales and marketing.

While much of the United States has returned to something resembling life before the coronavirus, the tiny American territory of Guam in the Western Pacific is stuck in time. A year and a half into the pandemic, the island’s tourism-dependent economy remains paralyzed, and officials say a full recovery is probably years away.

The South Korean and Japanese visitors who once thronged Guam for its year-round sun and luxury boutiques are long gone, and with their home countries now in the throes of their worst Covid outbreaks, they aren’t coming back anytime soon. The island’s economy shrank by up to 18.9 percent in 2020, and would have contracted by as much as 49 percent without federal pandemic aid, according to estimates by economists at the University of Guam.

Recovery, the island’s leaders believe, starts with vaccination. Its population of 170,000 met the government’s goal of an 80 percent vaccination rate among adults by July, the same month it waived quarantine requirements for foreign tourists. It has also kept mask mandates, and compliance is nearly universal. Most businesses ask customers to record their contact information, and even small hotel elevators have markings on the floor for social distancing.

The government has also poured hundreds of thousands of dollars into a program that aims to entice tourists with the promise of not just a vacation, but also vaccination. The program, called Air V&V, offers visitors their choice of any of the C.D.C.-approved vaccines for $100 or less per dose.

By the end of August, at least 2,100 vaccine tourists will have arrived on chartered planes, according to the Guam Visitors Bureau, in addition to a relatively small number of others on regular flights. But that’s little consolation on an island that recorded 1.7 million arrivals the year before the pandemic began.

“It’s not even a drop in the bucket,” said Bob Odell, the owner of a water sports shop called Guam Ocean Adventures. “I don’t think anybody here is faring well.”

The island had hoped to draw people from Japan and South Korea, where the vaccination campaigns have lagged, but infrequent flights and strict quarantine requirements back home have kept people away.

“That’s an impediment to really growing this,” said Gerry Perez, the visitors bureau’s vice president. “We’ve got a program of organizers who are trying to put butts on the seats of planes.”

All of those arriving on chartered flights have been from Taiwan, where vaccines have been hard to come by and where travel agencies were quick to capitalize on the offer.

One Taiwanese visitor, Yulin Lin, was hiding from the sun under a bright orange gazebo one recent day, watching as her teenage daughters took selfies before stepping into a translucent lagoon. Strapped into diving gear, they were headed for sea life that has overtaken underwater craters named after World War II bombs.

Ms. Lin took her family to Guam to get the Pfizer vaccine before the school year started, spending thousands on a travel package that included a stay at the all-inclusive Pacific Islands Club. When she returns home, she will have to spend at least another $2,000, she said, on government-mandated quarantine in a hotel.

“I think it’s good for them to be outdoors again. They’re not just locked away in the house in the city,” Ms. Lin said of her daughters. “I expected a lot of things to be closed down, so we’ll have to come back here again.”

Across the island, only a few businesses said they had noticed the small bump in tourists. Many are instead relying on steady shipments of U.S. service members arriving for short-term assignments. Others said it simply cost too much to reopen for such a small clientele.

At the Hyatt Regency, where the vast lobby bistro has only a few small tables in use and the nightclub has been chained up for months, roughly 100 full- and part-time staff members have been let go during the pandemic.

Several gas stations have shortened their operating hours, and some car rental agencies have either sold off their inventories or begun leasing vehicles to local residents at a reduced rate. Independent taxi drivers have decided to find other work, and the local ride-share app, Stroll Guam, frequently tells users that it is out of drivers.

About 60 percent of the island’s revenue came from tourism as of 2019, and Guam has lost $200,000 in revenue per hour from Japan, South Korea and Taiwan since the pandemic began, said Mr. Perez, the tourism official.

“We believe we will recover, but we won’t recover very quickly. Not for at least maybe two or possibly three years,” he said. “If the gods are with us, we should be able to bring in 80,000 visitors for the next fiscal year.” That would be less than 5 percent of Guam’s usual annual influx.

Vaccination — of both the local population and any visitors who need it — is a first step.

Standing in the basement of the Pacific Islands Club one recent day, Kai Akimoto guided a group of Taiwanese tourists to a line of black tables, where nurses waited to give them their shots. He has worked six or seven days a week for months now, he said, coordinating vaccine outreach programs for the American Medical Center, a local clinic.

“We’re a community that is not so apprehensive about getting the vaccine. We don’t have as many people who have qualms about it here,” Mr. Akimoto said. “Their qualm is that Guam is still closed. And if this is the ticket to getting back to work and restimulating the economy, then they want people to get the shot.”

Down the street, the once-popular Guam Reef Hotel tended to a small group of customers, its lobby and infinity pool nearly empty on a weekend.

Jason LaMattery, the hotel’s customer service coordinator, said that the number of guests had dropped by about 98 percent between early 2020 and early 2021. In addition to military visitors, the hotel has had a small number of vaccination tourists.

“Things are starting to look up,” he said. “We are slowly recovering from a terrible situation. But are we going to get 100, 200 people from this? No, I don’t think so.”

A brave young Nanaimo, B.C., teenager stepped up to the plate on Wednesday when his parents’ family business had an unwanted visitor. In the Harewood...
Read more