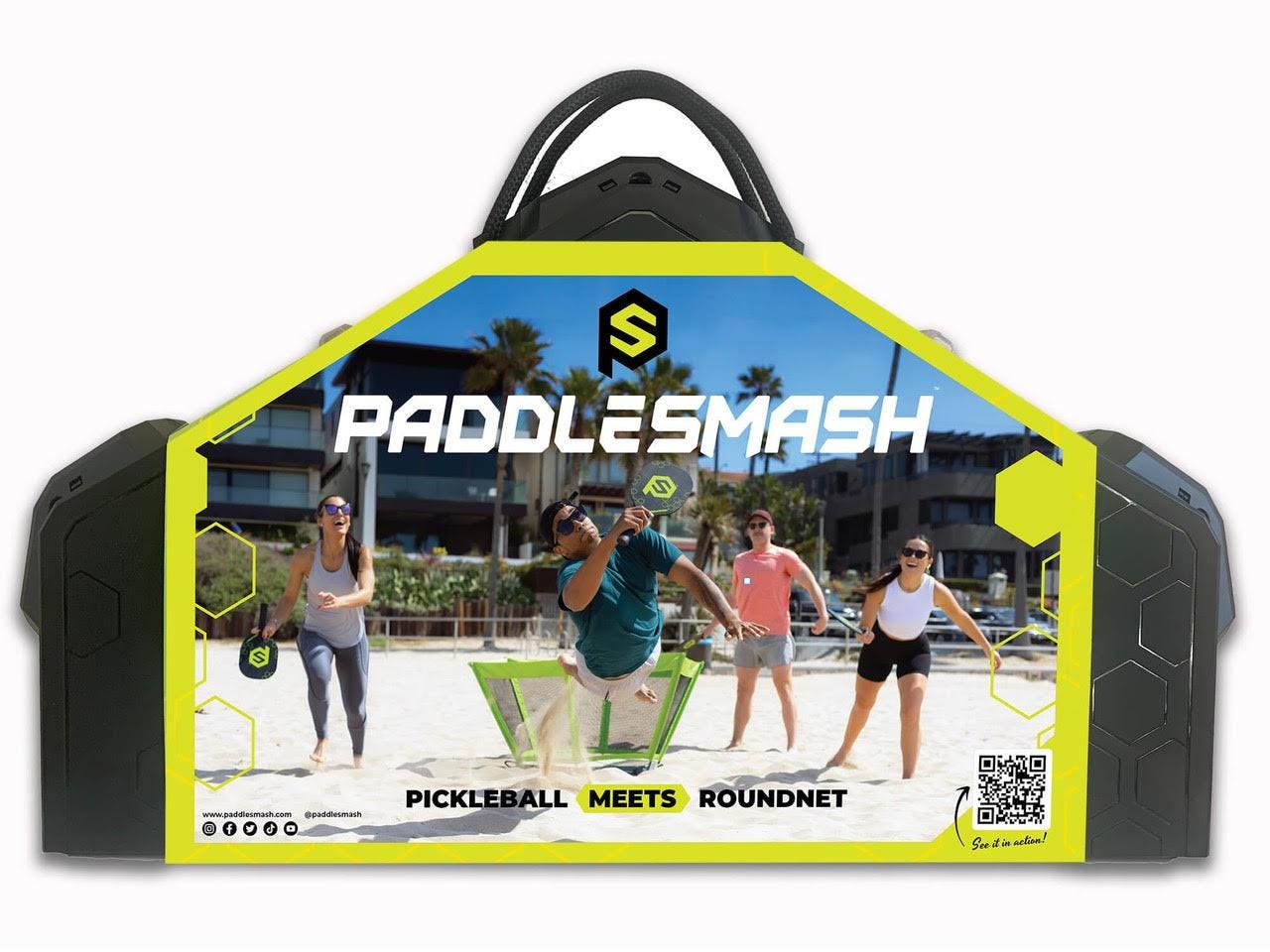 Joe Bingham, a structural engineer from Ogden, Utah, was looking for a backyard game he could play with his seven kids, instead of driving everyone to a pickleball court 20 minutes away. Unable to find what he was looking for, he invented his own, called PaddleSmash.

In the game, which combines elements of pickleball and Roundnet, two to four players use paddles to try to “smash” a ball into a six-sided court that sits on the ground.

After tinkering with the game in his yard for a couple of years, Bingham teamed up with serial game-industry entrepreneurs Tim Swindle, who launched Utter Nonsense—which grew into a million-dollar, three-person business—and Scott Brown, who previously founded Marbles: The Brain Store, and Brainmaker Games. “When we got our hands on the prototype, we loved it,” says Brown. “We started showing it to our friends and network.

Based on those initial conversations, the immediate follow-up by some of their contacts was: Can I invest?” The answer was yes. The co-founders raised $500,000 from nine private investors to fund the launch. They hired an industrial engineering firm to create a production version of the game so it could be manufactured.

PaddleSmash is now selling on Amazon. The founders say they are getting ready to roll out the game in Dick’s Sporting Goods this fall, and it will be available in Scheels, a Midwestern sporting goods chain, this coming spring.

The food and entertainment destination Chicken N Pickle, where people can eat out and play pickleball, is also testing the product.

“Chicken N Pickle purchased PaddleSmash to test in a few markets where we operate, and we’ve been thrilled with the response,” Kelli Alldredge, senior vice president of engagement, said in an emailed message. “We love seeing people of all ages and abilities gathered around for a bit of friendly competition. Because Chicken N Pickle fosters an atmosphere of fun, friendship and community, offering PaddleSmash to our guests has been a natural fit. We plan to purchase one for each of our locations and look forward to planning and hosting PaddleSmash events.”

To grow the brand, the founders also plan to pursue institutional customers, like schools, as well as businesses such as health clubs.

One thing that is driving interest in the product, says Swindle, is the popularity of pickleball. Pickleball is currently one of the most popular new sports in the United States, with the number of participants skyrocketing from 2.46 million in 2014 to 4.82 million in 2021. In communities across the country, players are clamoring for more courts.

“Pickleball is approachable—anyone can play it,” says Swindle. “We think that is the appeal of our game, as well.”

One difference is that PaddleSmash is a little less strenuous than pickle ball, he adds. In PaddleSmash, play is confined around the hexagonal court, while players bump, set and smash with their partner “You don’t have to run around as much,” notes Swindle. “It’s very appealing to a vast array of people who have different skill levels.”

PaddleSmash is also portable, with a court that can easily be folded up. “You can play it in the backyard, and beaches,” says Swindle. “It gives you the pickleball flavor.”

The founders of PaddleSmash aren’t the only entrepreneurs to notice the hunger for backyard games in the post-pandemic era. Check out the crowdfunding site Kickstarter and you’ll see games such as Putterball, a fusion of golf and beer-pong, and Chip-Down, a portable game to introduce golf to non golfers.

But despite the competition, PaddleSmash’s founders say the interest in their game shows no signs of slowing down. “It’s growing like crazy,” says Brown.

A pint-sized creature that was lured toward a shiny red firetruck this weekend is feline-fine after a surprising adventure. A kitten was spotted at around...
Read more

Manitoba charities are hoping for help on Giving Tuesday this holiday season. Giving Tuesday is an opportunity for people to give back to the community...
Read more

The head of the Canadian Elite Basketball League (CEBL) says the Hamilton Honey Badgers’ permanent move to Brampton was not only necessary but an...
Read more