Huge Steel Plant in Mariupol Is a Fortress for Ukrainian Holdouts 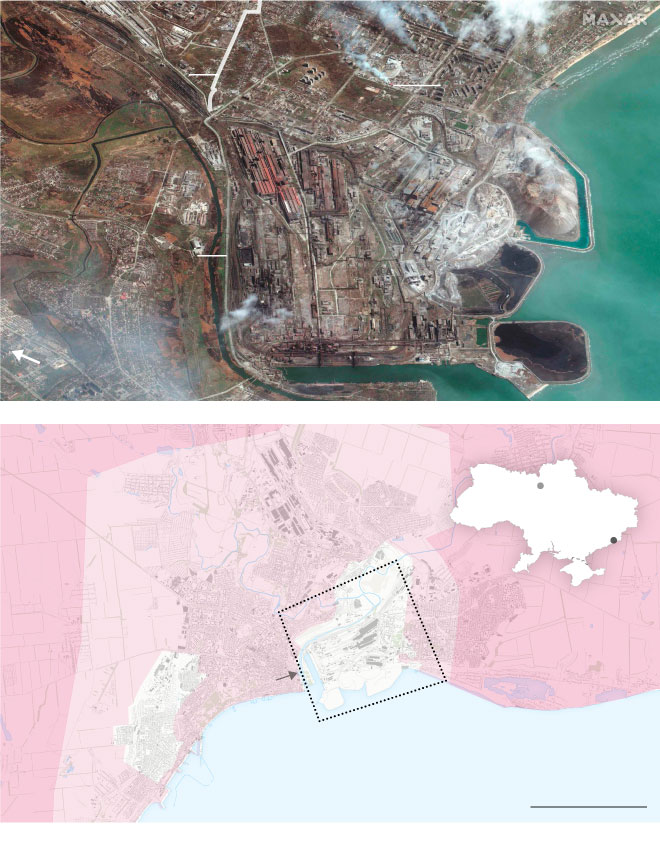 DNIPRO, Ukraine — Under incessant fire from the air and with Russian troops closing in, a group of Ukrainian soldiers holed up in the besieged city of Mariupol issued a message of despair on Tuesday evening, expressing hope that their own forces would come to their rescue and demanding that the world do something to stop the Kremlin’s vicious war.

“We’re surrounded; they’re bombing us with everything they can,” said a Ukrainian soldier who gave his name as Gasim. “Our only plan is for the blockade to be broken by our forces so that we can get out of here.”

Gasim and his comrades reached out to a reporter near midnight as Russian forces continued their bombardment of a sprawling Soviet-era steel mill with underground bunkers that is sheltering thousands of soldiers and civilians.

While Gasim and the others would not confirm that they were in the mill, the Azovstal steel plant, officials said that this was where the last Ukrainian defenders of Mariupol had taken refuge as Russia’s battle to take full control of the city appeared to be entering its final stages.

The soldiers spoke by video chat on WhatsApp, offering a rare glimpse of a battlefield that has transfixed the world. The men often spoke over one another, the light of the phone occasionally bringing their faces into focus in the otherwise pitch-black darkness. They seemed unaware of the attention their fight had attracted and refused to divulge basic details about the number of troops and their locations that the Ukrainian authorities had already described.

The holdouts in the underground fortress represent the last stand of a strategic city that has endured a relentless siege by Russian forces. The remaining defenders’ ordeal has captured global attention as they have held off the enemy for weeks, in what has been likened to a Ukrainian Alamo.

With ammunition and supplies sparse, the men who were interviewed said they were carrying on the fight and refusing to acquiesce to the Kremlin’s demand’s for capitulation. But they acknowledged that they were running out of time and increasingly found it difficult to leave the protection of their shelter because of the heavy bombing.

“We are putting up a difficult fight with the enemy, protecting our country and our people and our culture, our right to self-determination,” another soldier who gave his name as Kostya said, even as he acknowledged they had little to fight with.

“As we’re talking to you, they’re firing on us from the air, dropping bombs,” Gasim said. “Tell America to help us.”

After about 15 minutes, the video cut out and further attempts to reach the men were unsuccessful.

The interviews came as Russian forces bombarded the plant with a heavy barrage of airstrikes and mortar rounds, as well as naval artillery fire from ships on the Sea of Azov.

The Azovstal plant where the men are likely sheltered makes for a formidable fortress, an immense industrial complex of thick concrete and walls, steel doors and reinforced underground warrens. Yan Gagin, who identified himself as a Russian adviser in the Donetsk People’s Republic, a self-declared government in eastern Ukraine backed by the Kremlin, said in a broadcast report that the steel factory was designed to withstand a nuclear war.

“It is basically a city under a city,” he said, conceding that the Russian campaign to seize the plant had been significantly hampered by the sophisticated network of passages, rooms and communication systems connecting the basement levels of the plant. 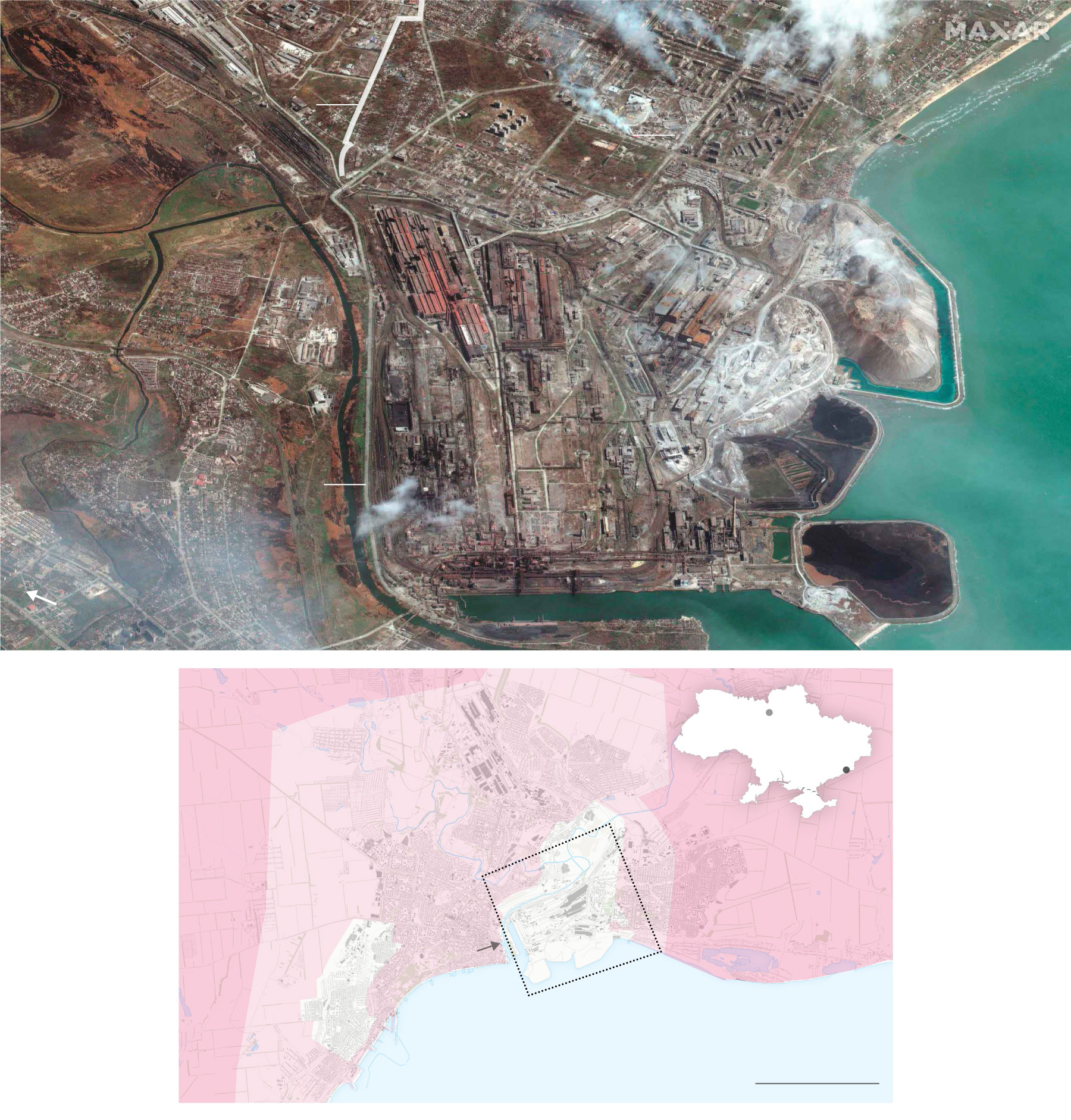 Frederick W. Kagan, director of the Critical Threats project at the American Enterprise Institute, said, “I assume the Russians are going to throw everything they have at this, to eliminate this pocket,” but he added that doing so could cost them dearly. “You’d be surprised at how well people can survive big bombs in a facility like that,” he said.

A spokeswoman for Metinvest, the company that owns the mill, said that the bunkers beneath it were used as shelters by steelworkers in 2014, when Russian-backed separatists tried to seize Mariupol.

“Ever since the first invasion, we’ve kept the bunkers in good order and supplied with food and water,” said Galina Yatsura, who heads international communications for Metinvest, adding that the shelters can house up to 4,000 people and are stocked with enough food and water to last three weeks.

Two employees who stayed at the plant in the early days of the siege said that more than 2,000 civilians had been staying there, many of them family members of employees.

Russia’s Defense Ministry called a cease-fire for Wednesday in the area of the plant to allow civilians to leave, the Russian state news media reported. However, previous attempts to suspend fighting have fallen through.

The plant stretches across four square miles, a complex of buildings, smokestacks, blast furnaces and stacks of coiled and plate steel, and it has its own port facilities on the Sea of Azov.

One of the largest metal mills in Europe, it produced about 4.3 million tons of steel annually before the Russian invasion, according to Metinvest, a steel and mining conglomerate owned by Ukraine’s richest man, the billionaire Rinat Akhmetov.

The network of underground passages and rooms, which is now pivotal to the survival of the holed-up soldiers and civilians, was originally built to transport equipment between buildings, according to Metinvest. There was no planned military use for the tunnels before the war, the company said.

The steel mill has been under heavy bombardment, a Ukrainian commander, Lt. Col. Denys Prokopenko, said Monday in a video recorded at the factory. “They use free-fall bombs, rockets, bunker-buster bombs, all varieties of artillery, both ground and naval for indiscriminate attacks,” he said.

A new phase of the war. Russia declared that its offensive for control over Ukraine’s industrial heartland was underway as it bombarded targets across the sprawling eastern front. Ukrainian officials said they were mounting a spirited defense.

In Mariupol. About 2,000 people were trapped at a large steel factory in Mariupol along with Ukrainian forces that are waging what appears to be the last defense of the city. Russia is seeking to take the city as part of a strategically important “land bridge” to occupied Crimea.

Possible banned weapons. Based on evidence reviewed by The Times, it is likely that Ukrainian troops used cluster munitions in an eastern village that they were attempting to retake from Russian forces. The weapons are banned by many countries for the harm they can cause to civilians.

Russia’s economy. While President Vladimir V. Putin boasted that the Russian economy is holding up under Western sanctions, his central bank chief warned that the consequences were only beginning to be felt, and Moscow’s mayor said that 200,000 jobs are at risk in the capital alone.

The Russians are trying to establish uncontested control of territory linking the separatist-held regions of Donbas, in southeastern Ukraine, to the Crimean Peninsula, which Russia seized in 2014. The holdouts in Mariupol are the last substantial obstacle left in the region.

Russian forces have had the city, a major port, under siege since last month, bombarding much of it to rubble and slowly tightening their grip.

The fight over the Azovstal steel plant recalls one of the great struggles of the Second World War, the battle for the Stalingrad Tractor Factory as Nazi Germany’s forces attempted to capture that city. Thousands of German and Soviet soldiers died there, as did many civilians, before the Soviets ultimately prevailed.

Ukraine’s intelligence service wrote in a statement on Monday that the Russians were preparing to use three-ton bombs on the plant in an effort to raze it completely. Moscow is “not deterred by the fact that civilians have taken refuge in the plant,” the service said in a statement.

The plant was first established by the Soviet Union in the 1930s and rebuilt following World War II. It is a labyrinth of rail systems, workshops, blast furnaces and warehouses, with many of the buildings made of thick concrete and designed to withstand high temperatures.

If Russia succeeds in flattening the complex’s buildings, it is not clear how many people hunkered underground might survive. Eventually, though, they would run out of provisions, and the Ukrainians have warned repeatedly that the Russians might use chemical weapons to force them out or kill them.

In the confusion of the siege, it was difficult to get a clear picture of what was happening inside the factory. But according to Ms. Yatsura, a number of employees remain there. They had stayed after the invasion began to prepare the complex’s bomb shelters and eliminate hazardous materials.

Clearing the plant could hold particular symbolic value for President Vladimir V. Putin of Russia, who has justified his invasion with the false claim that Ukraine is run by Nazis, and that he is rooting them out. The plant’s defenders include members of the Azov Battalion, a force that does include far-right soldiers, some of them foreign, including white supremacists and people who have been described as fascists.

Capturing the Azovstal plant would also give the Russians better access to the region’s railway system and seaport.

How long the Ukrainian defenders can stave off the Russian invaders there will depend in large part on how many people are inside and how well sustained they are. Pyotr Andryushchenko, an aide to Mayor Vadym Boychenko of Mariupol, said the Ukrainian Army had arranged two operations over the past two weeks to take food to the plant; he did not say how that was accomplished. But the situation will probably grow more dire, he said, as Russian troops have blocked anyone, including civilians, from entering or leaving the city.

“These people, many wanted to avoid being displaced or deported, so they found protection with our troops, in the basement of the plant,” said Mr. Andryushchenko, who, like the mayor, left the city weeks ago.

The Russian Defense Ministry said on Sunday that its forces had completely surrounded the steel plant, and that the Ukrainian forces holding out “forbade negotiations about surrendering,” citing an intercepted radio transmission.