How Food Trucks Endured and Succeeded During the Pandemic 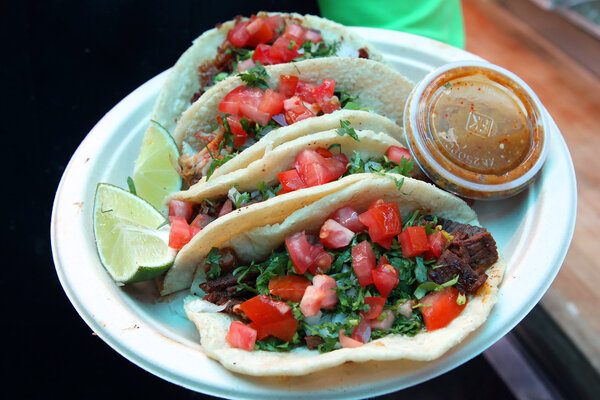 Embracing technology, scaling down costs and general flexibility have helped them through a difficult time.

This article is part of Owning the Future, a series on how small businesses across the country have been affected by the pandemic.

The Covid pandemic hit California hard. It has seen well over 3.5 million cases and over 60,000 deaths. Scores of businesses have closed. But for Ana Jimenez, the owner of Tacos El Jerry, a small fleet of food trucks in Santa Cruz County, it provided an opportunity to bring her business into the 21st century.

Ms. Jimenez’s four trucks began taking orders through an app and a website, delivering directly to customers, and cultivating a customer base through a new social media presence. All of that added up to a significant increase in sales.

“Our business grew,” said Ms. Jimenez, 50. “We even added a new truck. Credit goes to my son, Jerry, who is 23. We didn’t have anything on social media. He said, ‘we’re going digital on all of this, Mom.’” Half of her orders are now placed online, she said.

Ms. Jimenez’s son created Facebook and Instagram pages for the food trucks and a social media advertising campaign, and the trucks began accepting credit card purchases. “Each truck is now serving around 300 people per day, which translates to roughly $5,000 in sales daily,” Ms. Jimenez said.

Food trucks — kitchens on wheels, essentially — are flexible by design and quickly became a substitute during the pandemic for customers who couldn’t dine indoors and coveted something different than their mainstream carryout options. That, in turn, has delivered a new client base to add on to an existing cadre of loyal followers. In a very real sense, food trucks are vehicles for equality in the post-pandemic world.

“While the pandemic has certainly hurt the majority of small businesses, it has also pushed many to be more innovative by looking for new revenue streams and ways to reach customers,” said Kimberly A. Eddleston, a professor of entrepreneurship and innovation at Northeastern University.

Like Ms. Jimenez, some businesses have “focused on ways to maintain their customer base by, for example, delivering products directly to customers,” Prof. Eddleston said. “While others have created products and services that attract new customers.”

Mr. Cypher’s main fare since he hit the streets in 2016 has been global street food. His menu carries a heavy Asian inspiration. There’s made-from-scratch kimchi on the menu daily. Dishes can include rice bowls, Vietnamese banh mi, falafel burritos, and a burger made with a ramen bun.

During the pandemic, Mr. Cypher’s business took a hit when 24 festivals and over a dozen weddings where he was booked were canceled. “I switched gears to keep things as lean as possible,” Mr. Cypher said.

He temporarily shut down a second food truck — a retrofitted 35-foot, 1956 Greyhound bus that he used for the big parties — and introduced a website to interact with his customers and an online ordering system for his smaller truck, which he usually parked at a neighborhood brewery.

“I switched the menu to focus on soups, noodles, burritos and pressed sandwiches, so that the things that we were handing our customers would make it home and still be a good experience after they opened up the bag and took it out,” he said.

And he began to make and sell pizza one day a week at the kitchen where he used to do his prep work for the trucks before the pandemic. (The pizza, too, has an international flair: a banh mi pie, for example, made with pork or tofu, miso garlic sauce, mozzarella, pickled carrots, cucumbers, and cilantro.)

Customers can order and pay online or by phone and schedule a time to pick up; they receive a text or an email when their order is ready.

The kitchen “was already in place, so we turned around and said, well, what can we offer our customers in this unknown time that would be comforting,” Mr. Cypher said. “We had a wood-fired oven there that we use for bread baking, but basically it wasn’t being utilized.”

Before the pandemic, Mr. Cypher was serving roughly 1,500 customers a week from his food truck. A weekly festival on weekends, with 5,000 people stopping by the bus, of course, ramped up that number.

“The cool part is I was able to stay afloat because, unlike a restaurant with traditional seating, it was just myself, my sous-chef and his wife, who worked part-time,” he said. “We ended up serving roughly a hundred people a day, four or five days a week. So it wasn’t the numbers that we did before, but our lights were able to stay on because we had reduced a lot of costs that we had involved in running multiple rigs.”

Mr. Cypher, however, opted not to use delivery apps like Uber Eats or Grub Hub. “I don’t want to hand my food off to somebody else,” he said. “If we weren’t going to have the one-on-one conversations with our customers, we were at least going to give it to them directly.”

As Pittsburgh emerges from the pandemic, Mr. Cypher is adding a twist at his kitchen location. “We have licensing to offer beer on draft from our local breweries, so we’re going to have a small beer garden,” he said. “And that’s a revenue stream that we’re going to kind of lean into that we probably never would have done if not for Covid.”

In 2020, Mr. Cypher’s food trucks had $200,000 in gross sales, down about 40 percent from the previous year, he said. “But with the new offerings, more efficiency and only running one rig, we were actually able to net enough to keep the business moving forward,” he said. “This year we’re already up about 30 percent from where we were at last year at this time.”

For Ronicca Whaley, the chef behind the St. Petersburg, Fla.-based truck Shiso Crispy, timing was much tricker: she opened her first truck in November 2019, just a few months before the pandemic. And yet Ms. Whaley, 35, who offers handmade gyozas, bao buns and their signature dish, dirty rice, now has two trucks because of a strategy of regularly parking in certain neighborhoods and offering discounted and free meals outside a nearby Ronald McDonald House. (She added the second truck in January.)

One challenge: “The internet here is shoddy. And cellphone service in different areas out here just doesn’t work,” she said. “During the height of the pandemic, I was consistently losing two or more transactions at my point of sale every shift.”

Luckily, she was offered a special initiative for small business owners by Verizon Business: a year of complimentary connectivity and a 5G iPhone, as well as tools such as the Clover Flex point of sale program for touchless transactions. “It has digitally transformed my business,” Ms. Whaley said.

She also signed on to an app, called Best Food Trucks, that allows customers near her to pre-order once they know her location for the day.

“The inextricably connected stories of food trucks and Covid are a perfect microcosm of the undeniable reality that women, immigrants and people of color, historically relegated to the edges of the economy, are actually the foundation upon which the next economy must be built,” said Nathalie Molina Niño, author of “Leapfrog: The New Revolution for Women Entrepreneurs.”

But the silver lining from the pandemic for some operators is more personal — including bringing families together. “I have a ton of wisdom about how to operate food trucks and cooking,” Ms. Jimenez said. “It’s the coming together of the generations that made the business stronger now and for the future.”

COMMENTARY: Is the vinyl boom creating a new generation of audiophiles?

If you’re of a certain vintage, you probably spent a huge chunk of your disposable income on stereo gear. Back in the 1970s, ’80s,...
Read more