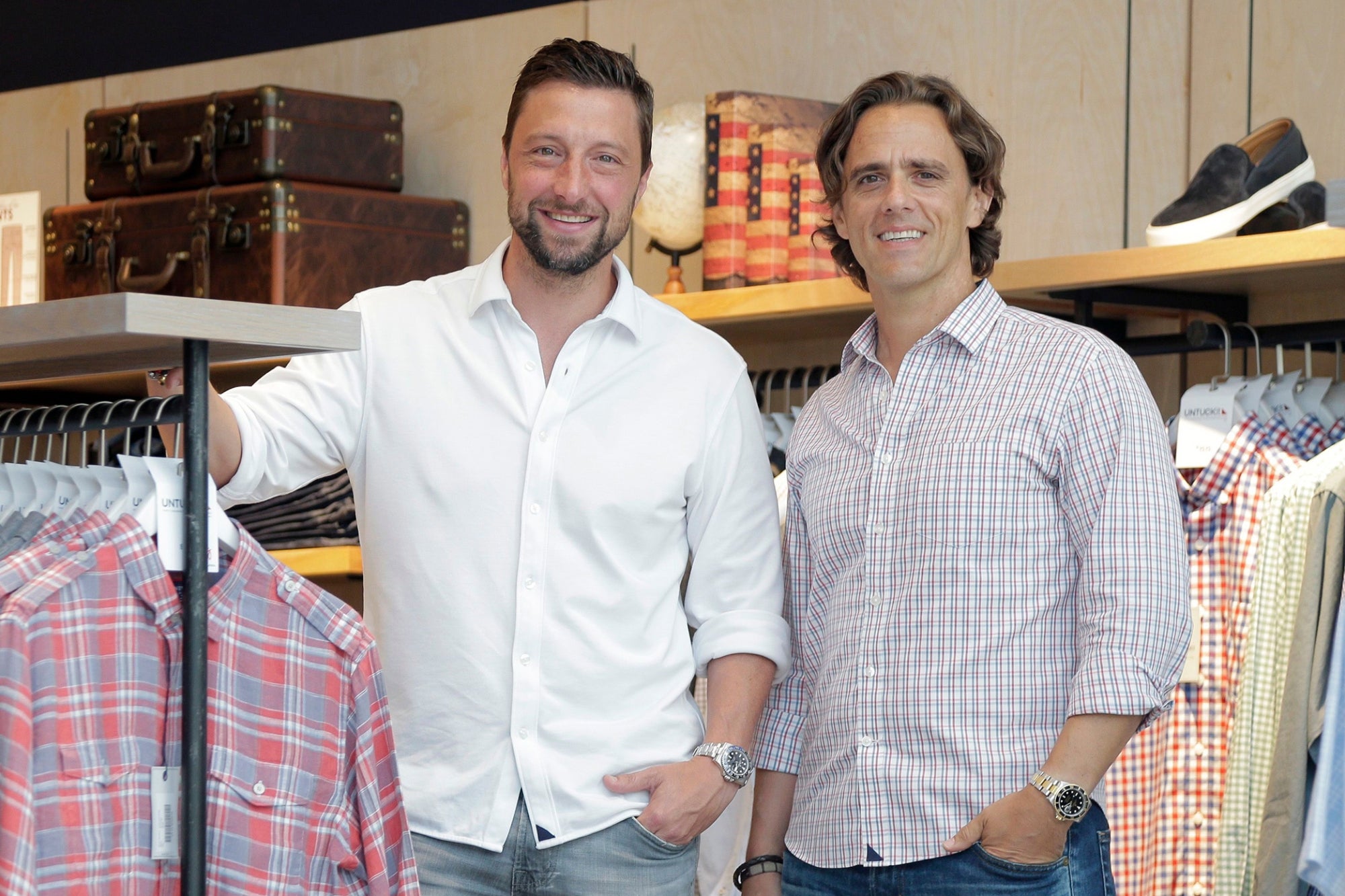 Recently, I had the chance to meet Chris Riccobono, the co-founder of the New York-based retail brand UNTUCKit. As a concept and brand, UNTUCKit was credited by The Wall Street Journal with hastening the trend (or the threat) of the Untucked Nation.

Ten years and 8 million shirts beyond its 2011 launch, the “Great Untucking” has become a phenomenon. Even after the pandemic, 88 physical stores dot the brick-and-mortar landscape (81 in the U.S., four in Canada and three in the U.K.) Additionally, three new stores have opened in 2021 in Long Beach, California; Sarasota, Florida; and Manchester, U.K.

All Riccobono needed was a good idea

Eleven years ago, following graduation from Columbia Business School, Riccobono was working as a healthcare sales representative for GE. His dream, of course, was to start his own business. All he needed was an idea. From 2003 to 2010, he worked his way through multiple ideas and a few small ventures while keeping his day job at GE.

But nothing worked. He considered going into finance, but that idea was quickly quelled by the collapse of the markets in 2008. He toyed with the idea of starting a wine blog. He was passionate about the topic, and it would give him the chance to learn to market online and build a social-media following.

Then came his entrepreneurial epiphany: men’s shirts with shorter tails, specifically designed to be worn untucked. It seemed brilliant — an idea that every man would understand and a set of products he could market online. What could be better? Whereas a trader needed to work in an office all day, he reasoned, a salesperson could work on both his day job and side hustle from home. Yes, it would require a near round-the-clock effort. But it could be done.

So now he’d need to come up with a sample. As he scoured the New York Fashion District and met with manufacturers, Riccobono was quick to discover how much he didn’t know about something as seemingly elemental as making a shirt. He needed help. So he called up Aaron Sanandres, now UNTUCKit’s CEO, a friend who’d been a fellow student at Columbia, and pitched his idea. Sanandres loved the concept, saying “I’ve been waiting for somebody to start a business like this.” The partnership was on, and a year later, the two were ready to share the idea with others.

Related: The Emotional Moment That Sparked a Winning Business Idea for This Entrepreneur

But the investors declined

In the company’s first iterations, investors pooh-poohed the idea entirely.

“The older guys who had money said, ‘I don’t know what you’re talking about,'” Riccobono recalls, “and the younger guys didn’t think it would ever catch on.”

And not only did the investors hate the idea, but they also hated the name, UNTUCKit.

“A fashion brand required a sophisticated name,” they opined, such as “The Chris Riccobono Shirt.” But UNTUCKit is the opposite: unsophisticated, focused and direct. Riccobono stuck to his guns, realizing that in a sea of elite brands, the name and brand “UNTUCKit” would stand apart from the crowd. It was a brilliant SEO strategy too.

Today, the UNTUCKit brand is one of the illustrious few products with a name so familiar it’s nearly generic, like “Jello” or “Kleenex.” The logo treatment is ingenious as well; the simple flag is bright, straight to the point and unique — a splash of branding on an untucked tail, lending a coolness factor and a subtle tie to the increasingly popular brand.

At the start, however, Riccobono and Sanandres faced the significant challenge of launching a national and global men’s fashion brand with just $150,000.

“We didn’t have enough money to market,” Riccobono says. “All we could do was hire a very small PR firm. We’d make 1,000 shirts and see how far we could go before we ran out of money.”

And, of course, the $150,000 would have to cover the building and launch of the company’s website as well.

Related: 4 Tips for Successfully Breaking Into a Saturated Industry

Launching small was a blessing

In the launch, Riccobono bucked the canonical trends of raising a boatload of money through private equity and giving up 50% ownership, acquiring Class A office space to make him look and feel really important, and making some hires to solidify the feeling that it was a real company. The co-founders agreed they would have no office. Riccobono wouldn’t quit his day job (which he did not until year six). They’d “work ‘til we’re sick,” they agreed, and would protect their equity by doing no further fundraising until the need arose to begin opening physical stores.

By the time Riccobono resigned from his prior job, the company was running at a level of more than $20 million with just himself and Sanandres with no office or fundraising. The early ascent seemed bitterly slow, but the two didn’t mind because they still had full-time jobs. Interestingly, they recall approximately one in ten customers writing thank-you notes to the company for coming out with the product, in spite of a learning curve that caused the first several generations of product to be, in Riccobono’s own words, “really terrible shirts.”

Riccobono attributes some of the company’s success to sheer luck. “If we’d raised a lot of money, we would have been marketing heavily, and the quality of the first shirts were terrible — we’d have been out of business,” he said.

So why do men love UNTUCKit?

The same Wall Street Journal story that lamented the casual trend of untucking noted that for many men, “especially those who haven’t seen the inside of a gym since ’08,” the untucked shirt provides some camouflage for a wearer who’s sporting a bit of a gut. Skeptics bemoan the fact that when the wearer sits, the lap of an untucked shirt becomes so wrinkled it looks like “you dragged it across the floor.” UNTUCKit’s answer to the propensity for wrinkles is specially chosen fabrics and cuts that put the shirt at a little higher price point. The attention to design and function is clear.

Following the pandemic lockdown, it’s become even more apparent that untucked shirts are here to stay. As people head back to work, even the older and more traditional employees have shifted to more casual work wear. By mid 2021, UNTUCKit had surpassed its 2019 pre-pandemic performance. Sales doubled over the months of May to July, and the company’s 2022 revenue goal is north of $300 million.

My final question for Riccobono is why the ecommerce brand has also expanded through a network of traditional stores, and how that strategy has worked out. As it turns out, Riccobono says, “Many men need to see and feel the shirts in person.” However, he points out that the buildouts and décor for the brand’s predominantly male customers require little space and can be surprisingly spare.

The stores have been good business although Riccobono acknowledges that during the worst of the lockdown, “Eighty percent of my time was spent negotiating deferrals and abatements on leases.” This made it an interesting time to be opening a new Florida store, he concedes, but all is thankfully progressing according to plan.

“In order to survive during Coronavirus, we needed the malls to cooperate,” he said.  “And thankfully, almost all of them did.”

Related: 7 Qualities Every Entrepreneur Should Look for in a Co-Founder

UNTUCKit is planning extensive additional expansion to international markets. I ask Riccobono if manufacturing and trade will return to normal. He laughs, recalling a time prior to the pandemic when he and others were brainstorming the ways to be prepared for all possible crises.

“What is the worst thing that could possibly happen?” They asked. The answer was “supply-chain disruption.” It was a nightmare that seemed unfathomable, but in 2020, it happened. But in the same way the company weathered its prior challenges, it has not only survived, but also thrived. For all of the highs and the humbling lows of crisis, UNTUCKit’s first decade has been an astonishing victory for resilient and creative entrepreneurs.